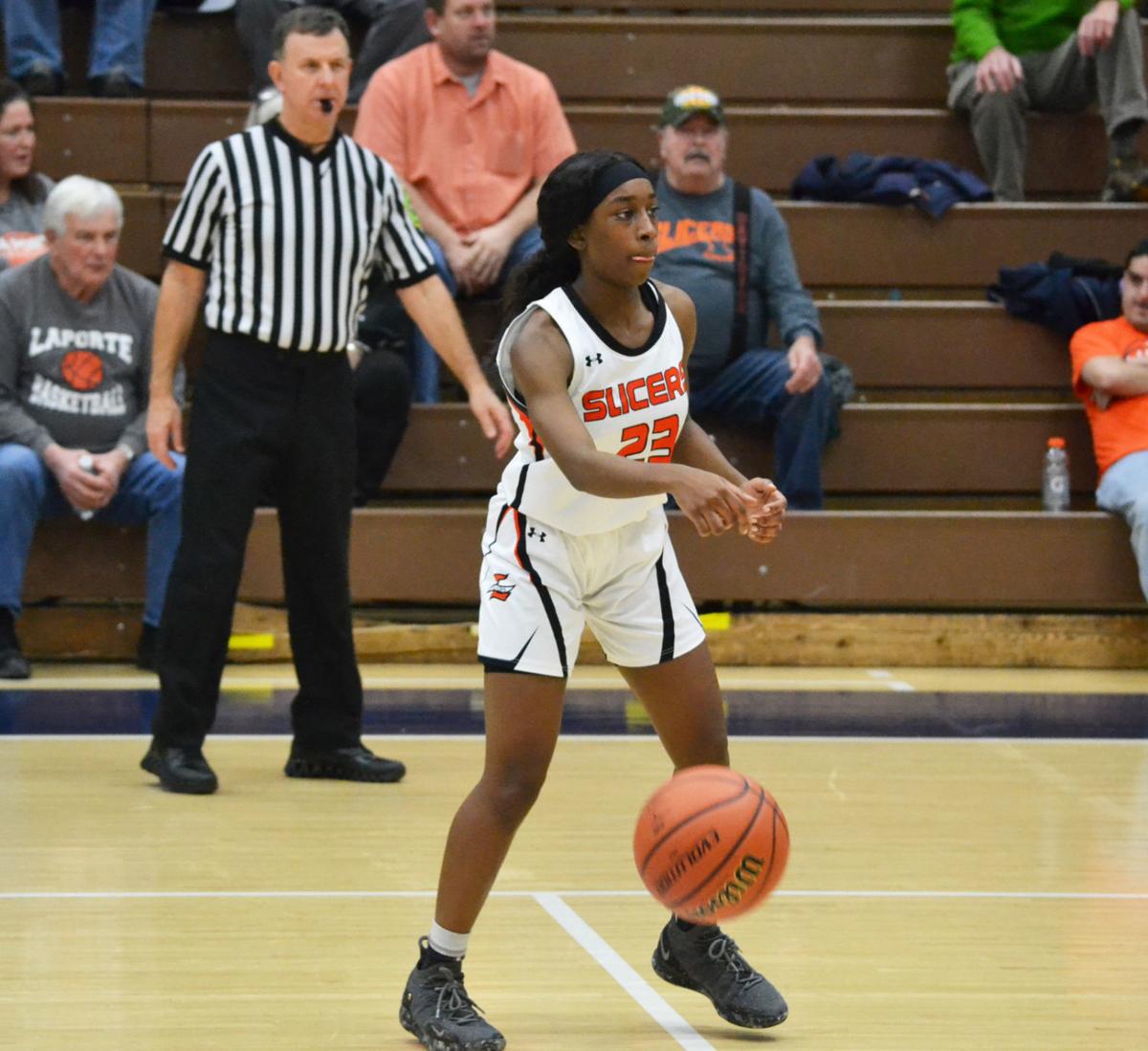 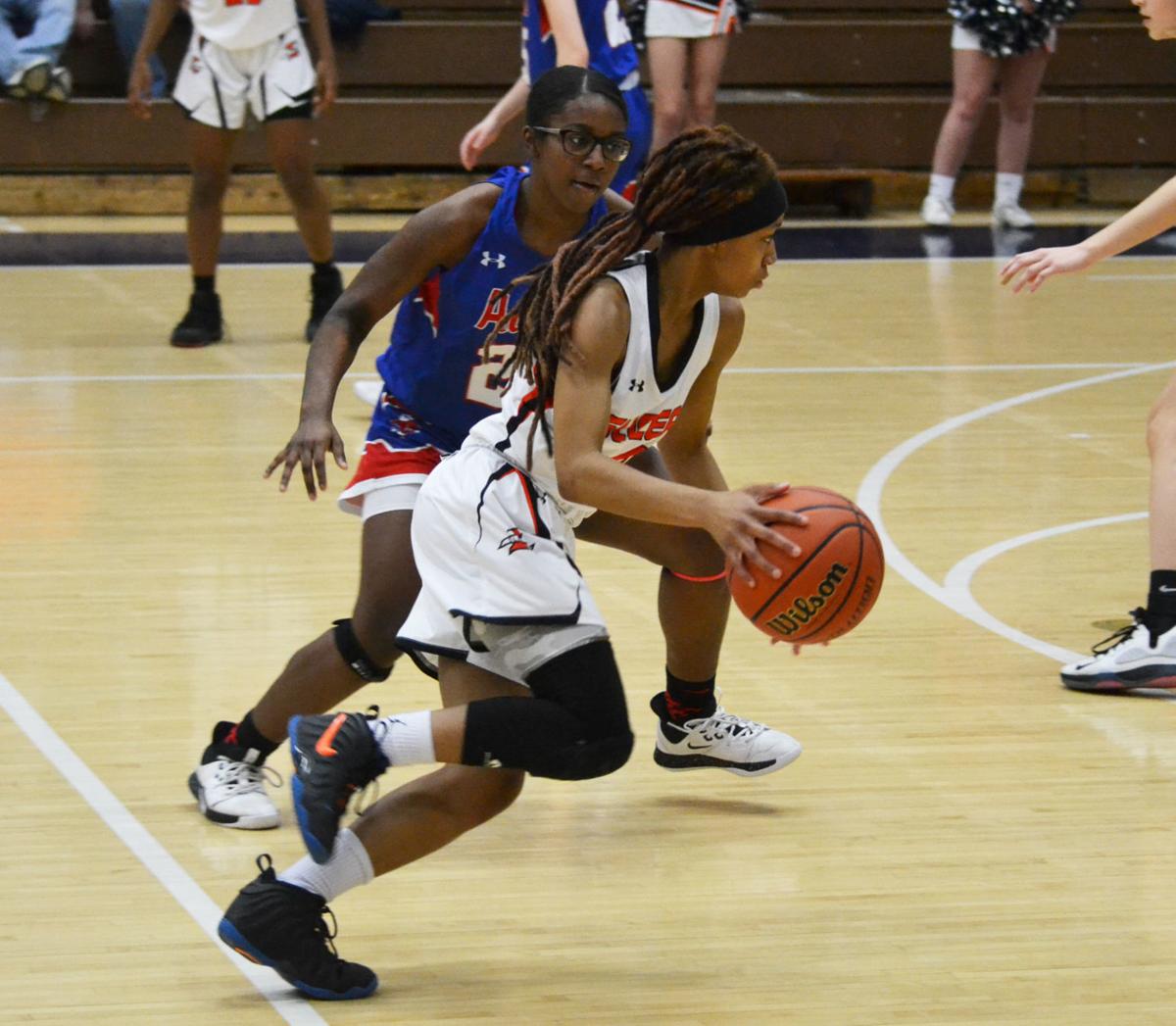 La Porte’s Kayla Jones makes a move with the ball in a Michigan City Sectional opener against South Bend Adams on February 4.

La Porte’s Kayla Jones makes a move with the ball in a Michigan City Sectional opener against South Bend Adams on February 4.

The La Porte senior duo, the only two current players who were part of the Slicers’ last regional team, is now gunning to make it deeper in the postseason than before.

The last time La Porte advanced to the regional was 2017, when it fell to Duneland Athletic Conference nemesis Merrillville 63-47. Asad and Jones will look to erase that memory when they compete in the regional once again, as the Slicers (18-7) meet Munster (22-5) in a Class 4A La Porte Regional semifinal at about 11:45 a.m. on Saturday.

Asad vividly recalls the amount of Slicer fans at the regional three years ago against the Pirates. She doesn’t doubt that experience will pay dividends this time around.

“I’m very familiar with everything,” Asad said. “That’s going to help us a lot to hopefully make sure we win. Because having that support and having those surroundings is what gets us going and gets us on our runs. That also makes us make better decisions for ourselves in a game.”

While the Mustangs haven’t been to this stage of the postseason since 2010, La Porte is making its second regional appearance in four seasons. In its last regional, it trailed 24-9 to Merrillville after the first quarter before losing by 16 points. The Slicers rallied and stayed virtually even the last three periods before succumbing.

Still, Jones feels like the situation of playing in the regional will be beneficial this time around.

“It gives us extra confidence,” Jones said. “We know we’ve been here before. Three years ago, although we didn’t make it past the first round, we believe this year we’ve got the clientele and that extra push to make it, just because of that experience.”

Sixth-year La Porte coach Rob Walker agrees that their previous regional participation will a favorable influence on the squad.

“It’s huge,” Walker said. “Kayla was a little bit further along at that time than Nyla. She was starting or sixth man as a freshman. She had two big games in the sectional to help us win it. And she played good against Merrillville in the regional. I remember putting Nyla in and she just blew us away. She got a big steal in that game.

I don’t think she converted the layup, but I was like, ‘Wow.’ She stole it from one of Merrillville’s dynamic guards, so that experience and being around those ladies that year really makes a difference.”

To complement their familiarity of playing at this stage of the state tournament, Asad and Jones have been fundamental to La Porte’s defense.

They’re two of three guards who spearhead the team’s stingy defense, along with junior Alanti Biggers, which is a hallmark of the Slicers. They’ve held three postseason opponents to only 40.6 points per game.

“Our quickness has really aided us,” Asad said. “We’re really quick on our feet. We’re able to get back really well, trap really well, just maneuver around the court. That’s what makes us so effective.”

The diminutive 5-foot-4 Jones, who makes the ball look enormous in her hands, added that speed and cohesion has been crucial to that side of the ball.

“We know we have some pretty quick guards, so if one guard isn’t quite up to it that night, the next one will do it,” Jones said. “We all pretty much rely on each other and we push each other to have the best team we can.

While they finished with just seven and five points, respectively, in the 51-38 sectional final win over Michigan City, Asad and Jones impacted the contest various ways.

That’s what has impressed their coach most in this postseason.

“They both were huge factors in the sectional championship game and neither of them scored in double figures,” Walker said. “So they were leaders on the floor. They both had big games the night before, and the game before that. But they were doing what they needed to do to win, that was rebounding, assists, playing great defense. That was a championship mentality.”

The Slicers have hoisted the sectional trophy three times in the last five years. La Porte is striving for one more victory to at least make the Elite 8 this campaign, however, after returning to the regional for the first time since 2017.

“I feel very grateful for my teammates, for the team I have, that we were able to make it this far,” Asad said. “It means a lot to the whole team, because the sectional was a big thing for us. But we’re not finished yet, we’re not satisfied. We just want to keep going as far as we can. I’m a senior and I’m glad I could be a part of it my last year.”