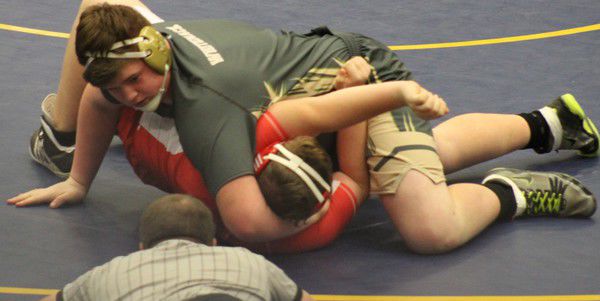 Photo by Ben BachmannHunter Whitenack of New Prairie is 31-2 at 285 pounds this season. He lost 55 pounds since football season in order to make weight. 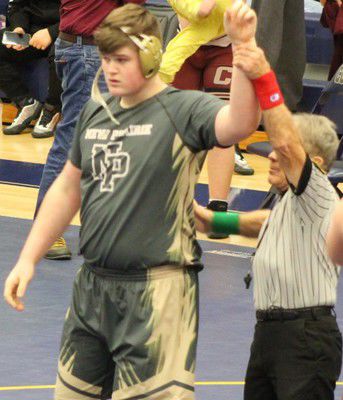 Photo by Ben BachmannHunter Whitenack of New Prairie is 31-2 at 285 pounds this season. He lost 55 pounds since football season in order to make weight.

Consuming upwards of 10,000 calories on some days, the 6-foot-7 New Prairie sophomore weighed 340 pounds when the season ended back in November.

"It was his willingness to sacrifice something," Cougars coach Bobby Whitenack said.

The younger Whitenack has a promising football career ahead of him. That's the sport that's going to pay for his college, so before he moved forward with any kind of weight loss plan, he addressed the subject with some of the schools who are recruiting him.

"Notre Dame's (offensive line) coach was all for me doing it," he said. "All of Iowa's starting linemen were great (high school) wrestlers."

While the idea reportedly doesn't fly with New Prairie football coach Russ Radtke, who makes a point of walking by Hunter during lunch, baiting him with a tray full of pizza, the colleges all prefer players do other sports.

"Russ wants him big," coach Whitenack said. "(The colleges) all want him to drop the weight, (make) the self-sacrifice. They want a multi-sport athlete. Every one of them said they want him to do everything possible. They'd actually rather see his wrestling film now than his football film. They can make him a football player. They want to see, are you an athlete?"

The task was daunting, and while coach Whitenack loves having his son on the mat, he left the decision entirely up to Hunter.

Once Hunter decided to lose the weight, he figured out how to go about it. The first 20, came off relatively easy, through practicing in a sweatsuit over the course of a week.

"Wrestling practice is tougher than football practice," said coach Whitenack, whose brothers Brian and Tyler Dolezal dropped roughly 30 pounds to wrestle heavyweight (285). "Getting down to 300 was real easy. The last 15 was tough. It's part of life as a heavyweight. I only weighed 250 in high school. I got to eat every day. I was going to try 215 my senior year, then I was like, 'Nope, that's not happening.'"

Hunter began the Keto diet, a high-protein, no-carbs regimen. He cut out pop and any beverage with sugar, switching to Powerade Zero. He consumes water literally by the gallon.

"He had to sacrifice a lot," coach Whitenack said. "Instead of eating this much, you eat this much. It makes you work hard. He's been very disciplined. He's feeling a lot better. There's not the sluggishness of being 330. He's really watching what he eats during the week so he's not gaining too much. It gives him a lot more energy when it comes to Saturdays. The first Saturdays, he was still pretty weak. I think it's a lot easier now. Once he got it down, it was just a matter keeping it down. If he can maintain during the week, on Friday, if he's five pounds over, he just needs to have a good practice."

The week of the Dec. 8 Jimtown Super Duals, Hunter didn't eat from Wednesday to Saturday. While it's not something he'd want to go through again, the sense of accomplishment when he looked at the scale numbers during weigh-in -- 55 pounds lost in five weeks -- was uplifting.

The process, of course, is an ongoing one. The family, save for occasionally his younger brother, doesn't eat or drink around Hunter, out of respect to him.

"At first, he was angry, now, he's less angry," coach Whitenack said. "You look at him now, he's a pretty happy guy. My wife always has healthy options for him. If he's not getting to eat and drink a lot, we're not going to either. I'm just not going as far as him. We've done this before with other kids. I've coached a lot of peoples' sons, but they don't go home with you. Coaching your own son is kind of special. I just enjoy being around him. I think this means more to me than he'll ever know."

Along with the weight loss, Hunter has had to make some wardrobe adjustments, whether it's rolling over the waistbands on his sweats and shorts, or cinching up regular pants a couple more loops with a belt.

"It feels weird, like I'm a different person," he said. "I was the biggest (lineman). Now when I see those guys, I'm the smallest. I want to try to play football at this weight."

Hunter still eats his chicken wings, just not nearly as many as in one sitting, and he eats them dry, save for a splash of hot sauce, which can actually be conducive to a healthy diet. He misses Black Cat Pizza in New Carlisle, particularly the cinnamon sticks with icing, and Ben's Pretzels, but he's glad he's made the changes to his diet, and hopes it can fuel a run to state in wrestling.

"I think if he played (football) right now, he'd be a lot better. At 285, he's a healthy guy," coach Whitenack said. "You see a lot of times, NFL players, as soon as their careers are done, they cut that weight off quickly because they're not eating thousands of extra calories. I think by doing this he's setting himself up for his future after his college career, knowing he can take that weight off now. In college, they'll have a certain set weight they'll want him at, and when he's done, he can get back down. He's learning way more than wrestling, he's learning a lifestyle."