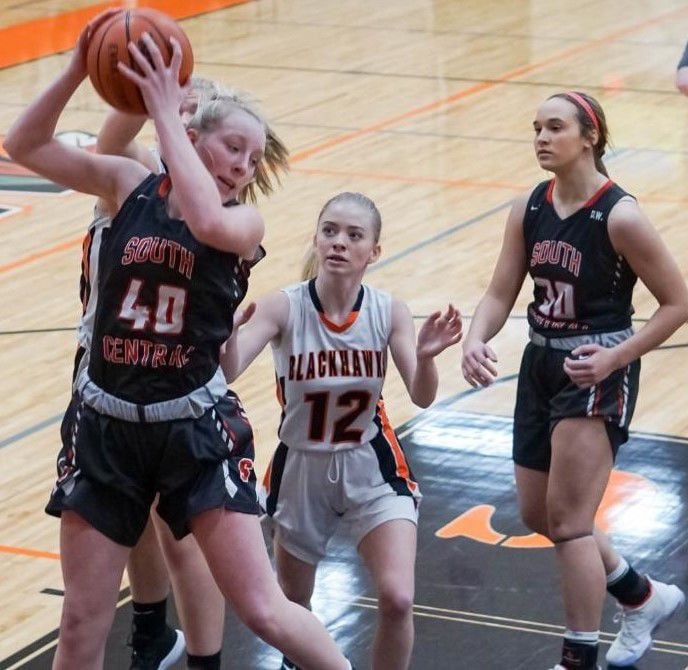 South Central freshman Olivia Marks has found a key role with the Satellites as a strong rebounder. 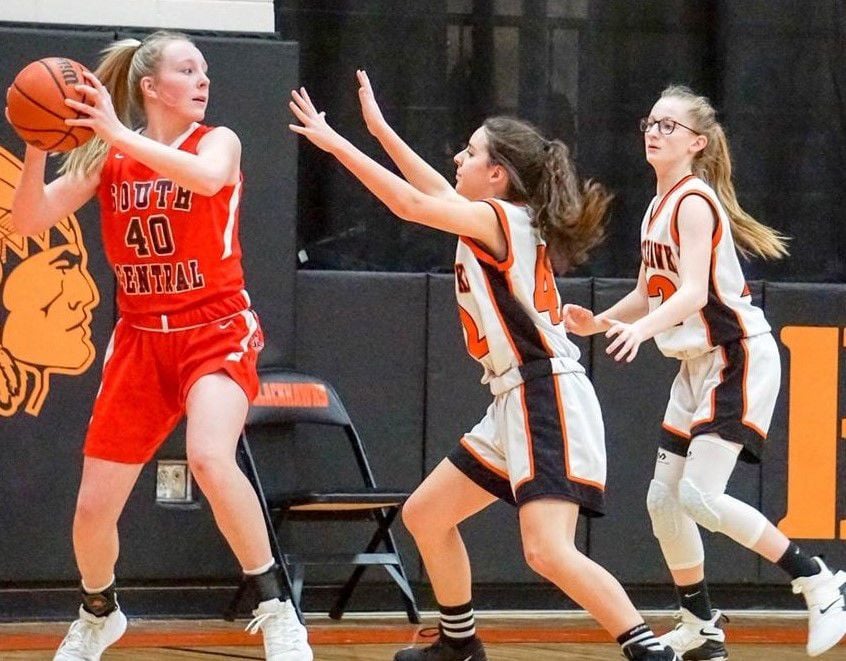 South Central’s Olivia Marks looks to pass in a game against Westville. The freshman is second on the team in rebounding.

South Central freshman Olivia Marks has found a key role with the Satellites as a strong rebounder.

South Central’s Olivia Marks looks to pass in a game against Westville. The freshman is second on the team in rebounding.

HEBRON — It should come as no surprise that Olivia Marks is an accomplished rebounder.

Retrieving the basketball is part of the South Central freshman’s DNA.

“It’s what I liked to do,” Scotty Marks, Olivia’s dad, an SC assistant and 1996 graduate, said after Saturday’s sectional championship. “My brother Keith played at South Central, too. He was a big rebounder. Our dad (Daniel) was a big rebounder, too. He played independent ball after he graduated. My wife (Bridget) played, too. She was a three-sport athlete. It’s just kind of been a family thing that’s always kind of carried on. We’ve always liked to rebound, fight, battle. It’s been fun. It’s a way you can take your anger out and not get in trouble for it.”

Scotty Marks excels at rebounding – he still plays in a Sunday league at the La Porte Civic Auditorium – even though he’s under 6-feet tall, and his daughter is no different, pulling in 6.3 boards a game despite standing a modest 5-8. She’s second on the team to 6-foot Amber Wolf (7.4/game).

“I’ve really worked hard,” Olivia said. “I’m not the tallest out on the court. That’s my opportunity to score.

When we miss a shot, I enjoy helping and putting it back up. I try to stand at a certain sport where I can see a certain way the ball’s going to go off the rim and I just sprint to the spot I think it’s going to be.”

The younger Marks snagged 26 boards in S.C.’s sectional run, including 11 in the final.

“Olivia is a very hard worker,” coach Wes Bucher said. “She is also great at anticipating, which gives her a leg up. She is pretty good at reading the ball off the rim and getting into a seam where she can get the ball. It allows her to get the team second-chance opportunities.

The other key is keeping the ball up high. Once she catches, she usually goes right back up with it. She does a good job of cleaning the glass.”

The younger Marks began playing when she was 6, recalling town ball camps at the local schools where kids would come and work on drills. By the time she was 10, she graduated to the NWI Thunder program, where her game began to take off.

“Thunder had a big impact on me,” Marks said. “I went into that not knowing how to shoot anything.”

“She had some really good scorers on her team, Sophie (Frasure) and Olivia (Burkett) from Judson, so that was her role, get rebounds and putbacks,” Scotty said. “That’s what we’ve worked on.”

Rebounding was a point of emphasis even before then as Scotty saw it as his daughter’s clearest path to success.

“We’re Charles Barkley fans actually. That was my idol. I’ve still got a few jerseys at home,” he said. “A lot of people don’t focus on that part of the game.

It’s not so important, so you can take advantage at that part of the game and excel at a younger level. You walk in as a freshman, you’re not going to be a big scorer, it’s a way to contribute to the team, play that way and handle your role. If you play physical, go hard, you’re more than likely going to get a lot of rebounds.”

As the newcomer in the group, Olivia had some trepidation about how she was going to adjust, but those anxieties were allayed almost immediately.

“Everyone warned me there would be freshman hazing and I think the seniors have done an amazing job,” she said.

“The girls were very welcoming. There’s not a lot of arguing. Everyone gets along. It just works out.

Even the first game, I was nervous, wondering how I was going to fit in, if I was going to get the ball passed to me, and they did an amazing job, making sure everyone got a chance at scoring.”

Though rebounding has been Marks’ ticket to success so far, Bucher’s quick to note there’s more to her game.

“In middle school, Olivia and Lillian (Tolmen) shared guard roles with their group,” he said. “However, Olivia has always been more of a cut without the ball, find the opening, and shoot kind of player. So, once she entered the high school program, she slid nicely into a post role. Because of her height and her shooting ability, she is able to play on the perimeter as well. She is a pretty good shooter when she gets going as well.”

While Marks has had bigger statistical games than she did in the sectional final, she’s probably not had a better stretch than the one in the fourth quarter against North Judson. With SC leading 44-33 midway through the third quarter, she scored seven straight points to put the game away, hitting five of six free throws and a reverse layup off a steal.

“It was really a good moment,” Scotty said. “We’ve been spending extra time in the gym shooting some free throws because she’s been struggling at that. They haven’t been going down when we’ve been shooting either. Sitting there on the bench, I’m rooting for her, hoping they drop so she can get her confidence back.

She was shooting well in her younger days. The biggest thing was, she missed a few, all those clutch situations, then to bounce back and knock those few down, as a dad, I’m very proud of her.”

Olivia, whose sister Sadie will join the program next season, appreciates how her dad has always kept a simple philosophy.

“Just always stay positive,” she said. “If you make a mistake, get pulled out of the game, stay positive, when you go back in, do your best.”