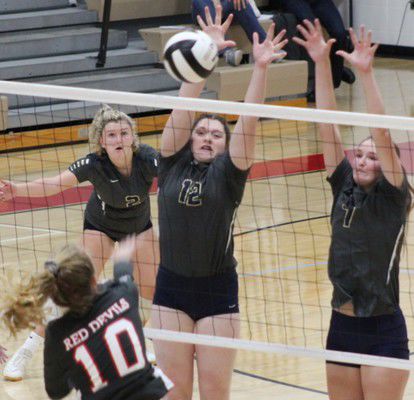 Photo courtesy of New Prairie AthleticsEllie Michiaels rises for a block in New Prairie's regional match with West Lafayette. The Cougars sophomore has been a key contributor off the bench in the team's return to semistate. 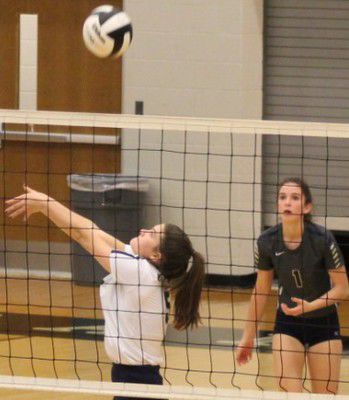 Photo courtesy of New Prairie AthleticsJosie Troy sets the ball in New Prairie's sectional match with South Bend St. Joseph. The Cougars sophomore has started since the middle of her freshman season.

Photo courtesy of New Prairie AthleticsEllie Michiaels rises for a block in New Prairie's regional match with West Lafayette. The Cougars sophomore has been a key contributor off the bench in the team's return to semistate.

Photo courtesy of New Prairie AthleticsJosie Troy sets the ball in New Prairie's sectional match with South Bend St. Joseph. The Cougars sophomore has started since the middle of her freshman season.

Often times after she makes a mistake during practice, head coach Jordan Staus doesn't have to say anything to her. Troy willl look over at Staus, tell her what she did wrong and head off the court to do the squat thrust exercise. It's a unique way to punish herself for an errant pass, getting aced or any other mishaps.

"It's the weirdest thing, but I can't complain because it makes my job a lot easier," Staus said. "I swear though, one day she's going to make a mistake in the middle of a game and run off the court and do some burpees."

While Troy's self-punishing workouts are obscure to say the least, they show a maturity not many underclassmen have. The burpees during practice set an example for the rest of the team, letting them know that it's important to recognize when you make mistakes. By doing so, Troy leads her teammates from a hard-working standpoint.

The best athletes are ones that identify something they did wrong and quickly fix it before it becomes a problem. The burpees help Troy do so, accelerating her growth as a player immensely.

"They really help me mentally," Troy said. "Whenever I do them, it just helps me quickly forget about the mistake I just made. I'm pretty hard on myself in general. So instead of getting down on myself after I mess up, I focus on the burpees and how much I hate doing them, and it just clears my mind."

Troy didn't start doing this until the beginning of her sophomore season, but it was imperative for the returning starter to continue to improve her game.

She was the only freshman to start on last year's semistate team, taking over for a senior in the middle of the season. For some, it was a bit of a shocking move to opt for the first-year player over the last-year one, but that's how Staus runs her ship. She came into last year — her first at the helm — and made it abundantly clear she didn't care what grade you're in; if you're the best one for the job, you're going to play.

"It was a pretty easy decision (to start Troy)," Staus said. "Josie had a really good chemistry with all the starters last year. She just played really well with them, so it only made sense to put her in there."

When watching this year's New Prairie team, it's obvious the chemistry with one another has been its backbone. The Cougars communicate and play extremely well with each other, knowing exactly what to do every play while working as one cohesive unit. Seeing how crucial that is to their success, it's no surprise Staus inserted Troy into the starting lineup as a freshman.

She doesn't play the typical role of the libero every play, though, with senior Katie Hancock taking charge defensively a majority of the time. But Troy's ability to consistently pass the ball to a solid spot for Shaye Tolch to set it for their lethal hitters — whether it be Hancock, junior Elise Swistek or freshman Haley Robinson — makes Troy's defensive skills invaluable to her team's success.

She also possesses one of the better serves on the team, striking the ball hard with a knuckling, zero-spin type of action. This "float" serve is extremely difficult for the opposition to return, as it dives hard and to the ground at any given moment. You can't predict when that will happen, and because of that, opposing teams often times can't pass consistently well off of it.

Staus utilizes this to her team's advantage whenever Troy is serving, giving her certain zones to pick on the opponent's worst returners. It's commonplace for the Cougars to go on a bit of a run whenever this happens, giving Staus a nice luxury that not many coaches have. Volleyball is a game of runs, as many say, and having a dominant server like Troy helps New Prairie go on those more frequently.

Her play has been instrumental in helping the Cougars go to semistate each of her first two high school seasons, and it all starts with a brutal, self-imposing workout of pushups and jumping. Troy is one of two sophomores to play contributing roles in each of the postseason runs, with one of her best friends, Ellie Michiaels, one of New Prairie's best bench players.

With Hancock leaving after this season, Michiaels is prime to step into her footsteps as the Cougars' middle blocker for the foreseeable future. Her potential has been showcased at times throughout the season, but none sticks out more than her sectional-clinching kill against South Bend St. Joseph.

Hancock dug out a spike from the Indians' hitter right to Tolch. With Michiaels lurking in front of the net, Tolch propped one up for the sophomore. Michiaels leaped and spiked it down and to her right, tipping off a St. Joseph blocker's hands and onto the floor to give New Prairie a 3-1 victory in the sectional semifinals.

She jumped up and down in pure jubilation, looking around at her celebrating teammates. The first person she sought out to embrace was her close friend Troy, and the two sophomores hugged and cheered in a monumental moment.

They both proved to Staus and others how crucial their play is not only for the future of the New Prairie volleyball program, but also to its present.