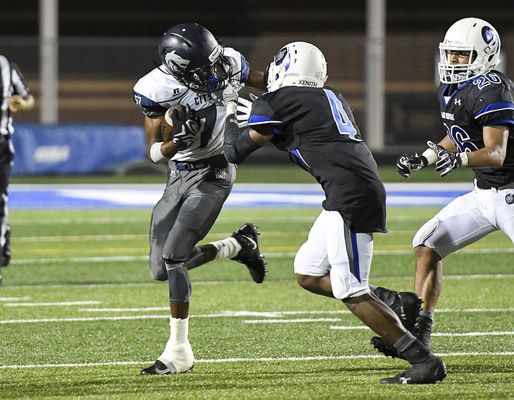 Photo by Robb QuinnMichigan City's Keyshawn McGill tries to gain more yardage after a catch in Friday's 56-14 victory at Lake Central. McGill's facemask is visibly grabbed on the play, but a penalty was not called. 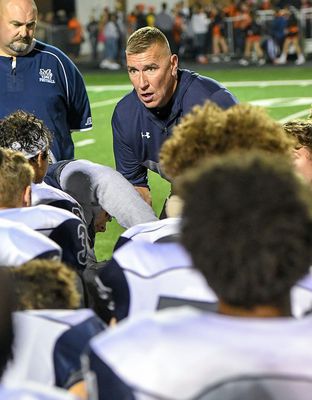 Photo by Robb QuinnMichigan City's Keyshawn McGill tries to gain more yardage after a catch in Friday's 56-14 victory at Lake Central. McGill's facemask is visibly grabbed on the play, but a penalty was not called.

Two weeks ago, after Michigan City’s 56-14 victory over Lake Central, head coach Phil Mason had a humorous diatribe in the third person that I saved for a rainy day.

We had some rain the last few days, and after City’s rip-the-heart-out-of-your-chest 58-56 loss at La Porte at Kiwanis Field on Friday night, the quote seems more pertinent.

Mason was asked about his team’s propensity to accrue penalties in games like the LC win or the Merrillville win. It was the one thing the coaching staff could lament as something to improve.

And they did the last two weeks. After having six penalties for 75 yards at Lake Central, the Wolves only had two penalties the following week against Portage.

Hence, why I held back using his monologue.

But on Friday at La Porte, despite only having two penalties for 20 yards in the first 47:58 of the contest, the 15-yarder with 1.7 seconds left — a pass interference that was questionable to say the least — made me go back to Mason’s comments two weeks earlier.

Are you ready to be entertained?

That’s what you call a premonition as everyone on the City side of Friday’s game thinks the pass interference penalty called on the second-to-last play was bogus — a “phantom call” in Mason’s words — while people donning orange and black say “of course it was a penalty.”

And by the way, it wasn’t the only blatantly missed call to go against City. It’s just the one Mason and Wolves’ fans remember most because it was at the end. But there was another, and it involved the kid who caught the final touchdown.

With City up 28-20 midway through the second quarter, La Porte scored on a 14-yard TD run by Drayson Nespo. After failing on a two-point conversion earlier, the Slicers went for two again. Quarterback Nolan Lorenz rolled to his left, dropped the ball, picked it back up and flipped it toward tight end Mark Haines. The ball clearly bounced on the ground before Haines corralled it, but it was still called a good conversion. There’s two points that shouldn’t have happened.

Don’t believe me? Visit the “Fans of Michigan City Wolves football” Facebook page and you can see that play on video and pause it to see the ball hit the ground. You can also see the video of the pass interference call on that Facebook page.

There are so many aspects of the instant classic rivalry game that should be the topic of conversation for weeks — at least until the Class 5A sectional championship game on Nov. 3.

How about the 1,020 combined total yards of offense?

How about the Wolves scoring 56 points in a Duneland Conference game for the third time in four weeks after never scoring that much in a DAC contest ever?

How about the Slicers also setting a program record for points scored in a DAC game, just surpassing the 57 they scored in a memorable 57-56 overtime win over Valparaiso in 2006?

How about the individual performances of Nespo and Michael McCullough Jr. and Lorenz and Daelon Wren and Keyshawn McGill adding to already impressive seasons?

Any of those would be great talking points. But instead, we have referee calls becoming the focus and longtime Wolves’ fans and some coaches wondering out loud if there’s a bias against City.

If there is — and I’m not going to state one way or the other on what I think — I’d like to know why. Is the infamous game against South Bend Washington two years ago that was stopped due to a fight a reason? Does it go back further?

The opinion I will state based on covering the Wolves every game this season is that Mason’s third-person rant has some credence. There were multiple bad calls in the Lake Central game, from a phantom crack-back-block call to a missed facemask on a McGill run. City probably should have won the Valparaiso game — in which the Vikings had a late TD pass to win — if not for a couple key bad calls, including defensive holding on Valpo’s final drive.

It just means the Wolves need to play even better to overcome any perceived bias or mediocre officiating.

Maybe the Slicers got a little home cooking, which happens in high school sports. All three specific games mentioned in this column were road games, and some high school refs do feel some pressure from the home crowd and the home school that’s signing the paycheck for that game, whether they admit it or not.

In less than four weeks, the Slicers and Wolves could be facing again in a sectional final for the first time ever as La Porte travels to South Bend Adams (2-6 record right now) and City heads to Munster (3-5), which lost to Lake Central to open the season. That postseason matchup would be at Ames Field.