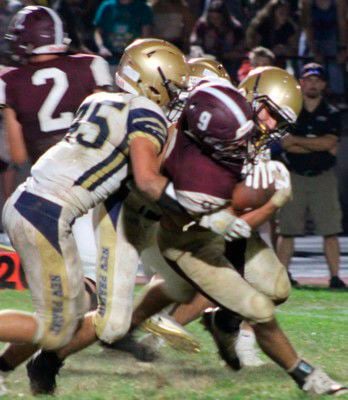 Photo courtesy of New Prairie AthleticsNew Prairie's Taylor Adams assists on a tackle in a game against Mishawaka earlier this season. 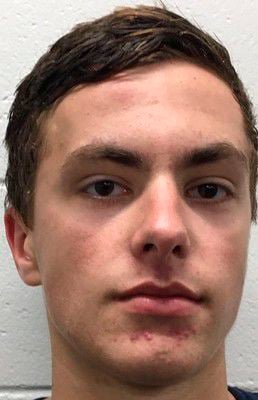 Photo courtesy of New Prairie AthleticsNew Prairie's Taylor Adams assists on a tackle in a game against Mishawaka earlier this season.

Some of New Prairie defensive coordinator Julio Cisneros' previous middle linebackers currently occupy jobs in the above professions. Aside from them having a physical prowess, he always puts a premium on his linebackers being some of the smartest kids on the team.

"I always make sure my linebackers are really smart in the classroom, but especially so with the middle linebacker," Cisneros said. "He has to know the entire defense extremely well and is in charge of everyone out there with him. He fits the mold of every player I've had in that position before. Academic-wise and in football talent, Taylor is probably in my top five for both that I've ever coached. He's one of those kids that when you give him an assignment, whether it's in the classroom or on the field, he's going to make sure he knows it to the best of his ability and makes sure everyone else knows it, too."

It's only Adams' first year playing middle linebacker, as he switched from defensive back to outside linebacker between his sophomore and junior seasons. Cisneros made the decision to move Adams from the outside to the middle before this year began in part to open up a spot for junior Brandon Kasinger, but also because he knew Adams had the mental capacity to take charge of his defense.

Adams has one of the top grade point averages on the team and is on pace to make the All-State academic team, according to associate head coach Bill Gumm. He was also recently selected to the La Porte County leadership program and the Indiana High School Sports Association student leadership conference for the past three years, based on his acedemic performance and leadership skills on and off the field.

"He's our vocal leader defensively," Cisneros said. "He's a really good kid in class, and he brings the knowledge out so we can all line up correctly each and every play. Everybody listens to and respects him because he is that senior, he's vocal and he's knowledgeable. That's the biggest thing he brings to the table."

With that leadership comes great responsibility for Adams to learn the defensive scheme quickly. Cisneros never wants to have to coach him up so he can focus on the rest of the linebacking unit, and that all starts with Adams' intelligence.

Often times when Cisneros gives Adams a scouting report, he knows it by the next day. That comes with a diligence in the film room that has Adams as one of the top three film watchers on the team, but a natural ability to soak in the information Cisneros gives him in just one day separates him from the pack. It's why so much trust is put into Adams to instruct certain things to his team that Cisneros may not be able to relay immediately.

What makes this even more impressive is that often times, Cisneros can't tell Adams what he wants him to say to his teammates, since Adams plays a majority of the offensive snaps as a combo back and receiver, too.

"With the position I play on offense, I have to know the ins and outs of every play," Adams said. "I help Chase (Ketterer) and Chris (Mays) make the reads out there, and I have to either make a block, run with the ball or go out for a pass. Having to know everything about every play on both offense and defense is a lot, for sure, but I've been playing both ways for so long now that this is normal for me."

Gumm runs the New Prairie offense and loves having the mind of Adams in there offensively. Ketterer has a 3.94 GPA and Mays an 1120 SAT score, according to their Twitter accounts, leading their intricate offense with their intelligence. Adding Adams into the mix just increases the chances for successful reads, on which Gumm's offense is predicated.

"Having someone on offense like Taylor that already knows so much about defensive schemes is invaluable," Gumm said. "He has a great idea of what an opposing defense is trying to do by the way it lines up, and that in turn helps us get into the correct offensive play call. I think him playing offense helps him out as a linebacker as well."

With an electric offense such as the Cougars', the defense isn't talked about much. But as they advance further and further into the playoffs, playing sound defense will become imperative once Ketterer and the offense get slowed down enough to make games tight.

Adams' play as the quarterback of the defense is key in executing an effective defensive attack, and more eyes will be on him as the weeks go by. Thankfully for him and New Prairie, his high football IQ will have his unit prepared each and every week for whatever offense it faces.