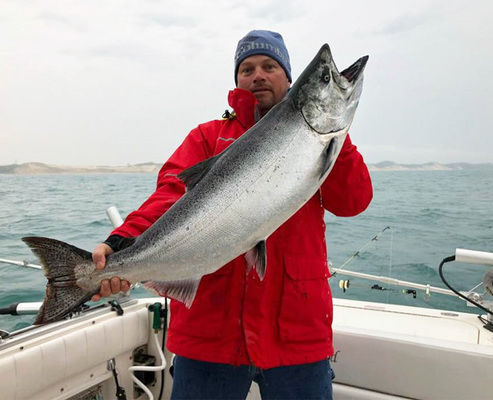 Hoosier Coho Club President Bruce Brown with a 27-pound chinook caught in May outside Michigan City. 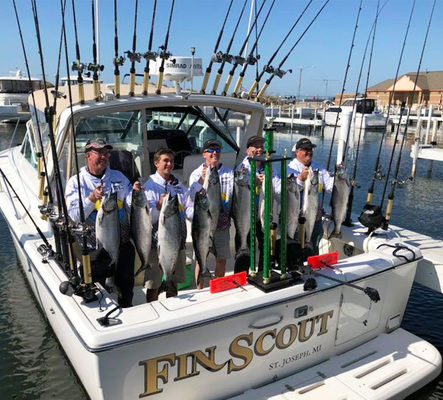 Hoosier Coho Club President Bruce Brown with a 27-pound chinook caught in May outside Michigan City.

Bigger, better and more of them.

An outstanding line-up of spring fishing contests in Michigan City is being put together by the Hoosier Coho Club's all-volunteer staff.

Foremost is the addition of a new, Lake Michigan Pro Fishing Series.

"We're expecting to have $30,000 to $40,000 in the series the first season, which starts with the Horizon Bank Classic at Michigan City," HCC vice president Joel DeVries, said. "Winners will be determined by the best three scores (place finished) out of five events (St. Joseph, Holland, Grand Haven and Ludington are the others)."

Entry fee is $500 for three contests in the Pro Series with first place claiming 40 percent of the pot, going down to 10 percent for fourth.

"We already have commitments from multiple boats, which have never fished Michigan City," DeVries added.

The first major contest organized by the HCC is the Buffalo Bill Memorial on April 20. Previously run by the Michiana Steelheaders, which disbanded in 2018, the Buffalo Bill features one division and a 10-silver fish limit.

The Bellman Oil/Morgan Tackle Pro-Am fishes April 27-28. Formerly a single-day tune-up for the Classic, the Pro-Am will fish two days with much bigger pay-outs, but with simple five-fish daily limits.

"Entry will be $300 on the pro side, but amateur entry is free with a paid entry in the Classic," DeVries said. "And the Am's will weigh just one day's catch, although they may fish both days."

The Hartman Memorial, a one-day, five-fish shootout with few rules is set for May 3.

Fishing through each of the above will be the La Porte County Convention & Visitors Bureau's Coho Capital Derby. The CCD runs April 19 to May 3 and awards cash prizes for the top three fish in five species, starting with $300 for the heaviest fish in each category. Entry is free to Hoosier Coho Club members.

The 45th annual Horizon Bank/HCC Classic, the longest running contest of its kind on the Great Lakes, is set for May 4-5.

In total, somewhere around $60,000 will be doled-out during the Classic. First place on the professional side is guaranteed a cool $12,000, while first in amateur gets $2,500.

There are also plenty of side bets in the Classic, chief among them the ALCO Big Fish (pays 10 places with 1st receiving $1,000) and Tournament Trail 333 event ($1,000 for the best 3 fish plus dozens of other prizes).

Complete contest details should be up before long at www.hoosiercohoclub.org. The Lake Michigan Pro Fishing Series will also have a website and a Facebook presence.

Last year, the best salmon fishing of the season occurred during April and May in the southwest corner of Lake Michigan. All-time winning marks were set for three consecutive contest weeks in Michigan City followed by a sensational three days in St. Joseph, Michigan.

Here is hoping it happens again.

Steelhead fishing was respectable at mid-week with some fresh fish snapping in the middle and lower sections of Trail Creek, although fishing pressure and clearing conditions could slow the bite this weekend. Check the results of Saturday's State Stream Tournament at nwisteelheaders.com.