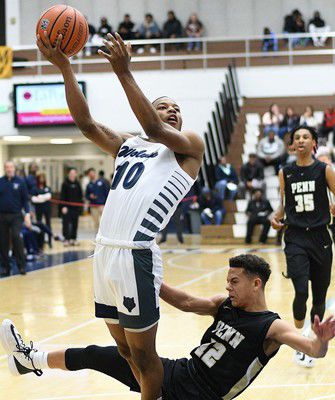 Photo by Robb QuinnMichigan City's Caron McKinney maneuvers inside as Evan Groves of Penn attempts to draw a charge in Saturday's game. 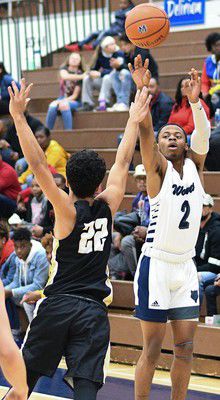 Photo by Robb QuinnTahari Watson of Michigan City had five first-half 3-pointers Saturday against Penn. He finished with 21 points. 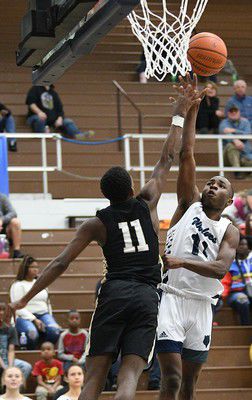 Photo by Robb QuinnJamie Hodges, Jr. of Michigan City floats a shot over the outstretched hand of Penn's Markus Burton in Saturday's game, won by the Wolves in overtime.

Photo by Robb QuinnMichigan City's Caron McKinney maneuvers inside as Evan Groves of Penn attempts to draw a charge in Saturday's game.

Photo by Robb QuinnTahari Watson of Michigan City had five first-half 3-pointers Saturday against Penn. He finished with 21 points.

Photo by Robb QuinnJamie Hodges, Jr. of Michigan City floats a shot over the outstretched hand of Penn's Markus Burton in Saturday's game, won by the Wolves in overtime.

MICHIGAN CITY — At this rate, Tom Wells might have Jamie Hodges, Jr. stay on his apple sauce diet.

The Michigan City freshman, who missed Thursday's game with East Chicago Central after having four wisdom teeth pulled last Monday, returned to action Saturday against Penn, but the talented guard did so on just two practices and no solid food over the prior five days.

"I'm feeling all right," said Hodges, his words still a little hampered by the dental work.

"We talk a lot about trying to win battles, stack up battles to see who wins the war, and we won just a few more," Wells said. "I was really worried. They are so fundamental, I didn't know if we could speed them up. There were times when they got easy baskets and times we sped them up and turned them over, too. It was just enough."

Watson did the bulk of the damage in the first half, nailing five 3s to spark City's hot shooting. Eight triples carried the Wolves (6-1) to a 40-29 lead.

"We didn't respect '2' enough," Penn coach Al Rhodes said of Watson. "That's my fault. We knew he was an excellent shooter, but with a young team, I try not to do special defenses. We kept somebody with him in the second half and he didn't have open 3s."

The City junior didn't require much room with his quick release, launching and connecting a couple times over unsuspecting defenders from the volleyball line (over 30 feet). He earned a team-high 21 points.

"If I'm open and I feel it, I'm gonna shoot it," Watson said. "They're not expecting it, so they just stand back a little bit. If their hands are down, I'm shooting."

A modest contributor last season, Watson credits the high volume of shots taken over the summer for his spike in range and accuracy.

"The shooting drill we do, in theory, makes shooting on the arc easier," Wells said. "We go on the arc, NBA 3s, then back on the arc. When you're shooting those and go back to the line, it seems easier."

Penn (3-3) adjusted defensively to City's torrid 3-point sniping and roared back into the game with a 14-3 start to the third quarter.

"I look up in the third quarter and they've got five team fouls in two, three minutes," Wells said. "I'm thinking, 'OK, now we've got to either throw the ball inside or attack the rim.' If you throw it in there just enough, it helps the perimeter game."

Hodges scored nine of the Wolves' next 12 points, all at the free throw line, as they edged back in front 55-50.

"The third quarter, they started coming back and (Wells) wanted all the points coming (inside), either drive or get it in the paint," Hodges said. "We just had to slow it down a little bit. The big man switched on me so I can drive. I was expecting a hedge, but they didn't do it. They were making it easy for me."

"How many times did we just go high ball screen and let Jamie create?" Wells said. "We try to pick the biggest, slowest guy, we go head tap, they always switch, and now we've got a big guy trying to guard Jamie. He's too hard to guard. We rode that horse for a long, long time. It became pretty simple play-calling. We kept going to it and he kept getting to the rim."

The Wolves led by six in the final minute but Penn's own slick freshman, Joe Smith, canned a pair of 3s to tie the game at 70. In a frantic finishing sequence, Evan Bush's rebound basket put Michigan City up two, but a long in-bounds pass barely eluded his grasp and Derek Derda scored with 1.2 seconds left, forcing overtime.

Watson followed his own miss to score in his only bucket inside the arc to initiate a decisive 9-0 City run in OT.

"Coach always preaches to us to follow our shot," Watson said. "I thought it was money, but it was off. We fight. Coach always says, 'What are we going to do in adversity?'"

"Credit their pressure on our guards, on our whole team, they're an excellent defensive team," Rhodes said. "Our guards are young, they went after 'em. (Hodges) played really, really well. Even when we were in a zone, they went to the basket and we weren't willing to take charges. We tried to block shots with guys who aren't shot blockers. Our whole team didn't set up very well. We're very inexperienced, a brand new team. Most of them are playing their fifth, sixth game. I like the fight we showed, we just have to learn to play smarter basketball."

"Caron works so hard," Wells said. "He practices that way, too. That sets a tone for us. We talked about what happens when it gets hard? Outside of the Gary West Side game, we haven't had a lot of these moments. I'd rather not have gone to overtime, and boy, can we draw on this for a long time."