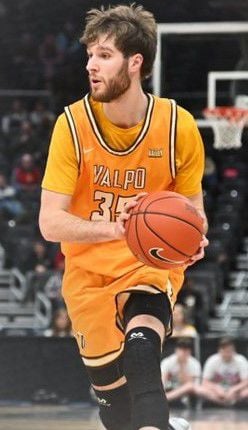 With the completion of four online classes this spring, Ryan Fazekas will earn his degree in business administration from Valparaiso University.

After five years of illness and injury, the Marquette Catholic graduate has been through enough physical setbacks to receive an honorary Master's in the field of perspective.

"The thing about Ryan that is really unique is he's been able to continue to deal with adversity," Crusaders coach Matt Lottich said. "It was disappointing, but he was never like, 'What could have been?' It was the hand he was dealt and he didn't make excuses."

All the stories have been told of Fazekas' misfortunes. It started with a broken thumb two weeks before his freshman season at Providence. He played nine games with his left hand heavily wrapped, then was sidelined by mononucleosis for a month.

He returned, but with a still compromised immune system, his production fell off significantly. The following summer, he reached his peak strength and weight, and took that momentum into his sophomore season, starting the first seven games. A torn labrum in his left shoulder sustained in practice hampered the balance of what would be Fazekas' final season as a Friar, his minutes declining to single digits in 13 of the last 15 games.

"One thing I was able take away from my college career, no matter how many times you get knocked down, things don't go my way, you keep getting back up," he said. "That was the story of every year of my college basketball career."

Fazekas transferred to Valparaiso, undergoing surgery while sitting out the season. Healthy again to tip off 2018, he made it through 16 games, averaging 12 points, before the injury bug bit again, this time an ankle injury. He missed five weeks, then broke the same thumb in a different place, ending his season after a four-game return.

The 2019-20 season started with a splash, a career-high 23 points against Toledo. Ten minutes into the second game Nov. 9 at Saint Louis, Fazekas fell and broke his left wrist on the impact with the floor. His litany of physical misfortune had taught him how to cope with the grind of the recovery process, but Fazekas had reached his emotional capacity.

"I thought that was it for me," he said. "It was pretty tough. I'm not one to cry, but when I got back from the hospital and heard what the doctors had to say, I saw coach outside the bus and I broke down."

Was college basketball over for Fazekas? Would he look into coming back?

"If I didn't return and was medically out, I could've appealed for a sixth year, but the process would have been out of my hands," Fazekas said. "There was no guarantee. That was a big factor. If it had been my right hand, I wouldn't have been able to play."

For once, the best-case scenario happened for Fazekas. The wrist healed quickly and on Jan. 23 at Missouri State, he was back in uniform.

"He was trying to get back, but to get back for the team, not get back for himself," Lottich said. "He selflessly went about it. The group had gotten into a little rhythm, but he knew the value he brought and how he could add more to that. That's what winners do."

After three games, Fazekas was back in the starting lineup.

"My mindset was to make the most of it, enjoy it at the same time, have fun and finish my college career off," he said.

Valpo went into the Missouri Valley Conference tournament 16-15, a long shot that needed to win out to make the Big Dance. After escaping 10th-seeded Evansville, it upset No. 2 Loyola in the quarterfinals and held off Missouri State in the semis. The lowest seed (seven) to ever reach the finals in the 30 years of Arch Madness, the Crusaders went toe to toe with Bradley into the final 10 minutes before the Braves pulled away to win 80-66.

"They hit us with a zone and it took a lot of effort and focus to beat it," Fazekas said. "We just didn't have enough gas mentally, physically. Even though we got the shots we wanted, we just weren't able to make them. It really took us out of the pace of the game. We were scoring quick and it slowed us down. Despite not having what it took to win the game, we fought hard to the end and I was proud of the group for doing that. We made a run no one expected. Everybody doubted us except the guys in the locker room. We came together as a group, we did something special and despite the loss, I couldn't be more grateful for the journey."

A few days later, all hell broke loose with the coronavirus, wiping out remaining conference tournaments. Subsequently, the plug was pulled on the NCAA tournament as well as all of its underlings, including the College Invitation Tournament (CIT), which was going to extend a bid to the Crusaders.

This time, Fazekas' career was over for real.

"I've dealt with it pretty good," he said. "We got to play our conference tournament. It felt good to have a chance to win that. (VU senior John) Kiser and I had a big conversation about it, if we had won our tournament, we wouldn't have been able to play and that would have hurt more than actually losing. Don't get me wrong, it hurt a lot, but, personally, I've been able to experience two March Madness-es. I know guys, I've talked to guys on teams who've never gotten to one, who would've gotten bids, and now they're graduating. I can't imagine how hard it is for those guys. We got a little taste of March Madness, which was better than nothing."

Another week or so separated from it, Fazekas was even more appreciative.

"I've been able to put it to rest, transition through the time, that my college career is coming to an end," he said. "I've reflected, looked back. I had a lot of great moments, everything I learned, how much I've grown over the years, how grateful I am to play college basketball and get an education for free."

"And he was never really healthy," Lottich said. "The talent's undeniable. He's tall, he's tough, he shot at a high level. I'm happy he had some fantastic moments and I'm proud of the legacy he left."

So what's next, once the classes are done? Even Fazekas isn't entirely sure. He's enjoyed the down time, albeit an odd period dictated by coronavirus restrictions, to simply relax.

"I haven't put much thought into it," he said. "I'm kind of stuck in the middle. I've been talking to coaches, people have reached out, I could have a chance to play, more so overseas. Right now, I'm focusing more on getting my body healthy again. It's nowhere near where it needs to be. I had to play with tape on my wrist, so it didn't help my range of motion. In the recovery process, I continued playing, so I wasn't able to do much strength training, I couldn't really push it in practice. You take enough beating in practice. To continue playing at that level took its toll."

The next step, at least physically, is to get his body back to where it was going into his sophomore year at Providence, then see where he's at in terms of his future and whether it includes a basketball.

While his degree is in business, Fazekas ultimately plans to go into law enforcement -- his dad, Bill, is a violent crimes detective with the Gary Police -- and ultimately make it to the FBI.

"I'm too active to sit behind a desk," he said.

His on-court impact will be missed, but Fazekas' steady presence will still be felt.

"We want all the team to have the attitude he had," Lottich said. "You look at where we were a year ago, it looked like the program was falling apart when, really, we were coming together. He was the personality of the team. The program was taking the face of Ryan, the face of John. We'll try to build on that and it's up to (next year's) seniors to take us to the next level."