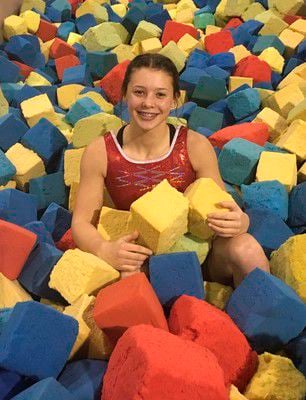 Photo by Jim PetersMakenna King sits in the foam landing pit at Lisa's Gymnastics, where the South Central sophomore trains. King placed in two events at Level 9 Nationals and is approaching Level 10 status. 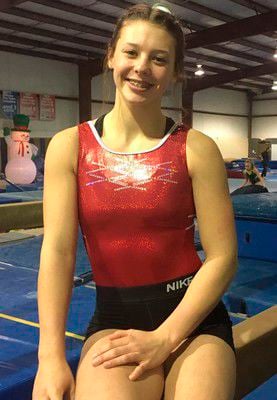 Photo by Jim PetersMakenna King sits in the foam landing pit at Lisa's Gymnastics, where the South Central sophomore trains. King placed in two events at Level 9 Nationals and is approaching Level 10 status.

UNION TOWNSHIP — The pressure of a gymnastics meet had never fazed Makenna King before.

She had performed in Level 9 club competition without a blink. Just a week earlier, the South Central freshman had breezed through the powerful Chesterton Sectional on her way to the all-around title.

Even her warmup the day of the Valparaiso Regional was fine.

"I went into the meet and I'm like, 'Mom, mom, I'm nervous. what do I do?'" King said. "I go to regular meets for club, I don't know anyone and no one knows me, no one has cowbells. The commotion and stuff, everyone's watching me, it got to me. I was just like, oh no, oh no, I've got to do good. It was not the typical meet."

The meet quickly unraveled for King, who fell on uneven bars, the collective groan of the crowd only compounding her angst.

"She was so emotionally distraught, I've never seen her like that," Corey King, Makenna's mom and assistant coach, said. "The whole day was unusual."

The spiral continued on floor exercise, where Makenna fell twice.

"You know how they take pictures during your routine? I was crying, I had hives down my neck and my eyes were this big," she said. "I've never had to call my mom into the hallway and tell her I was crying."

The punctuation mark on the day was a vault mishap where King hit her head on the bottom of the vaulting table during her rotation landing.

"That was just a good ending touch," Makenna said, rolling her eyes. "It made my day."

Those misfortunes aren't the reason Makenna returned for her sophomore high school season -- she was going to do that regardless -- but it undoubtedly added to her motivation.

"It made me want it more, but I knew I was going to do high school season," she said. "Everybody I met, they were all so nice. I love it. Even if I did really well, I was still going to do it again, not necessarily to prove anything, but just for fun."

After the regional, Corey reiterated with her daughter, 'If you don't fail as a child, you're going to be a terrible adult.' Makenna got tired of hearing it that day, but in the end, she knew her mom's advice was right.

"I'm stronger mentally," she said. "If I go into meets differently, prepare differently, I'll have a better outcome."

"I'm excited to take Makenna," Garcia said. "I have a lot of experience, keeping kids' heads in the game. Those are intimidating meets. It's hard being by yourself. You don't have anyone to calm you, to keep you focused. She had the freshman jitters. It takes a year. USA Gymnastics, you don't get a crowd screaming and hollering. When you start younger, you have meets of people watching you, but Makenna started kind of late, so she's a little fresher. I have some tricks up my sleeve to keep her mind in the game this year."

Garcia hadn't been coaching recently but had worked in the gym with Makenna a few years back.

"Makenna works hard," Garcia said. "She's very devoted to what she does. She has a natural talent a lot of people wish they had. It's amazing. I saw it from the day I walked in the gym and said, 'Lisa, who's that kid?' She's a great kid. One thing I can say that comes out of Lisa's gym are all-around gymnasts. They may not win an event, but they're going to be in the all-around. That's the kind of gymnast you want."

Makenna's rebound from the regional actually started just two weeks later at Level 9 state. She fell on bars, but pulled herself together to finish the meet strong. She qualified for Eastern Nationals as an all-arounder at the regional and, despite spraining her ankle at softball two days earlier, she placed on beam (fifth) and floor (sixth) there.

"She puts a lot of pressure on herself and you just need to do it for you, just do the best you can do," Corey said. "It doesn't matter what anybody else expects. You've always got to be proud of yourself."

Now approaching Level 10 status, Makenna has upgraded the tumbling on her floor routine. Otherwise, it's a matter of becoming more consistent in her skills.

"She needs to come in the gym and not do one and done, she has to do repetition," Garcia said. "Makenna's very intellectual. I can talk to her, get a lot more out of her. I explain things to her and she gets it. We are a team."

There will come a point in time when Makenna will have to decide if she wants to do college gymnastics. If that's the case, she'll have to focus on that. For now, she will continue to play softball, which she also continues to practice in the winter.

Makenna will compete in six regular-season meets, four duals and two invitationals -- Chesterton and Valparaiso -- prior to the tournament series.

"We're not going to focus on (last year)," Garcia said. "Put it behind you and move forward. Kylee fell on beam when she won state, so you can have a fall, you just can't let it defeat you."

While the nerves, Makenna concedes, are still going to be there, it's just a matter of dealing with them at the moment.

"I'm excited for the season. I know what to expect now," she said. "I don't really have an end goal. Just come back mentally and physically better. If all that falls into place, the results will come."