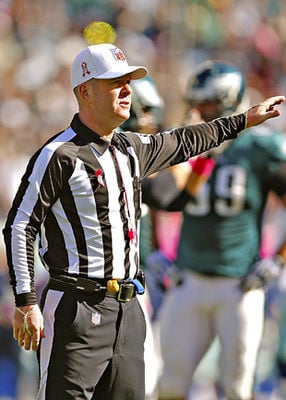 John Parry officiated two Super Bowls during his 19-year career in the NFL. The Michigan City native and Rogers graduate retired in April to accept a position with ESPN. He will debut Monday night on the Texans-Saints game in New Orleans. 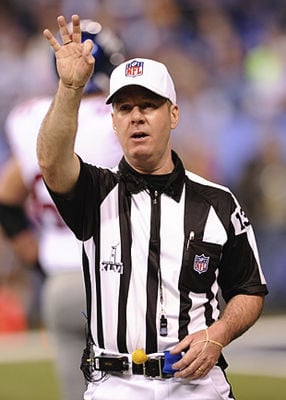 John Parry officiated two Super Bowls during his 19-year career in the NFL. The Michigan City native and Rogers graduate retired in April to accept a position with ESPN. He will debut Monday night on the Texans-Saints game in New Orleans.

Michigan City native John Parry and his officiating crew were working the Houston at Philadelphia game.

Due to a bad angle, they missed what he described as a 'massive facemask.'

"It was brutal," he said. "It felt like a facemask, it smelled like a facemask, but we didn't see a hand on the mask. We got together and said, 'Did anybody get a good look at it?' Everybody said no, so there was no enforcement. The Philly fans went nuts. They're booing. During the TV break, they show it on the Jumbotron, so they're like, 'How could you miss that?!' We had a roughing the passer penalty on Philadelphia right after that, and that just escalated it. I wanted to crawl under a rock."

That would prove to be the last regular-season game the 19-year NFL official with three Super Bowls on his resume would officiate. And while the turn of events that day didn't have much bearing on Parry's future plans after arbitering Super Bowl LIII, it certainly reinforced the long-standing idea of how thankless a job that it can be.

"You don't get used to it," Parry said of the verbal abuse. "(Compliments) never happen. In 30-plus years, I've never gotten any phone call from people telling me, 'that was a really great call.' It doesn't happen."

While he won't be wearing black and white stripes on Sundays during the NFL season anymore, that doesn't mean he doesn't have anything to do with football now. The 54-year old who got his start in the trade when he was a 16-year old at Rogers High School was hired April 1 by ESPN as an officiating analyst.

"This is an all new canvas for me to paint any way I want, based on what they've given me, until I figure something else out," Parry said. "I've officiated at every level up to this point. Selfishly, I could have easily stuck with what I was doing another four, five, six years and done one more Super Bowl then call it a career. That would have been the easy path. Then this opportunity came about surprisingly, so it was kind of the perfect storm, a good way to take on a new challenge, to re-invent myself."

The season started with Thursday's Packers-Bears game with the rest of the Week 1 games on Sunday and Monday, including the Texans-Saints game in New Orleans where Parry is heading. He will be in booth at the Mercedes-Benz Superdome with the game crew. In additon, Parry's Tallmadge, Ohio home has been set up so he can do live spots during the week for ESPN.

"I've been working since May 1, doing what I normally do during the travel season, the weekends, all that comes with it," he said. I'm doing all the same prep work that I did when I was on the field, going over the new rules and points of emphasis to make sure I'm dialed in for that."

In addition to providing input on calls and reviews, Parry will be doing segments that will give fans another look at the challenges of officiating.

"There aren't enough people entering the field," he said. "Schools are struggling to fill spots with a body, let alone quality people. Some are doing three, four games a week. Numbers are declining in every sports. It's not a good situation. It's not as easy as it looks. I can't describe what it's like to be on the field, the speed at which the game is played. In Pop Warner, Little League, Biddy Basketball, we have to find a way to get parents out of the stands and onto the courts and fields. It's the catalyst for an off-field ESPN vision. It's going to a huge platform long-term."

Parry's already begun efforts on a localized level, inviting folks once a month to the basement of a local church for pizza, pop and a discussions on officiating.

"We've gone from Little League up to Division I officials," he said. "We started with six people and it's gone up to 30."

While Parry's remained closely involved with the game and officiating, he's still intrigued to see what it's going to be like to not to referee a game. For the first time in some 30 years, he went to a high school game last Friday -- his son is a junior kicker -- and sat peacefully by himself at the top of the stands.

"It's a completely different feeling," he said. "We'd do three pre-season games, too. I miss the crew camaradrie, the preparation, packing the stripes in the bag, getting in the locker room, walking out, smelling the grass. I miss it all. I hope it goes away quickly."

ESPN's 'Booger' McFarland is part of Parry's broadcast team and the former NFL lineman has helped him in his transition.

"I've had some great mentors," Parry said. "They tell me I'll find (the feeling) in a different way. I just have to wrap my arms around it. It's a transition period. They told me, you're going to miss it, but just give it time."

Note: Parry chatted about a wide variety of subjects ranging from instant replay and how his Michigan City background still impacts his life. Those topics will be written about in future articles.