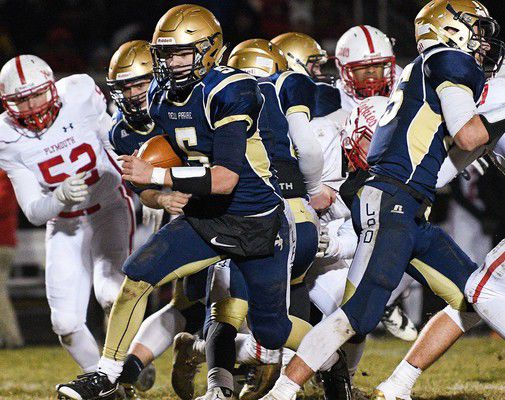 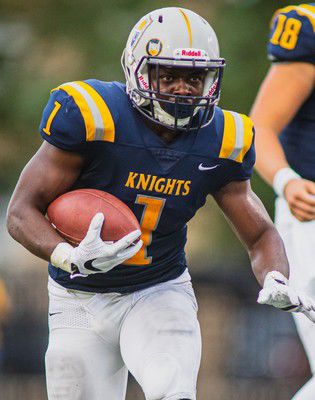 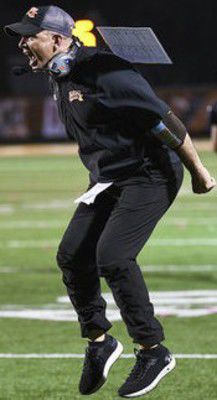 Photo by Robb QuinnJeremy Lowery went 3-8 in his first season as La Porte football coach after taking over for Dave Sharpe. 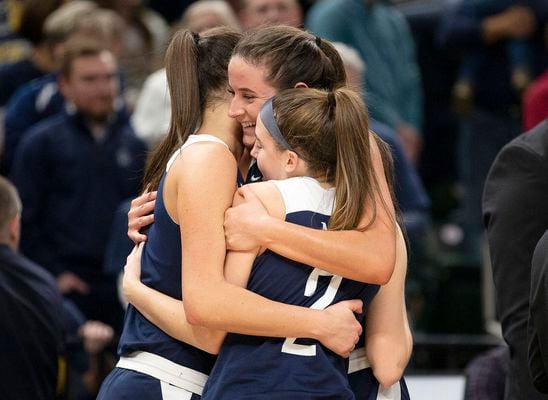 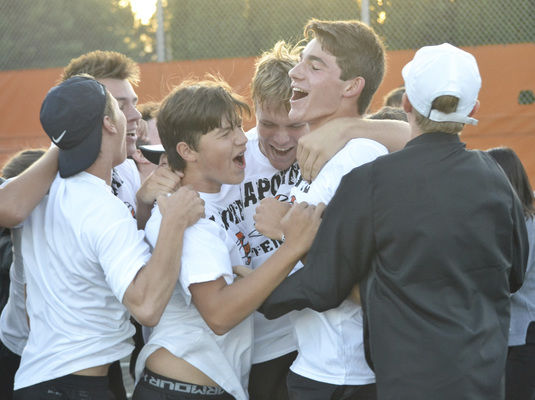 Photo by Zack EldridgeLa Porte boys tennis players celebrate after topping South Bend St. Joseph 3-2 to win their own regional at the LeRoy Courts on October 9. 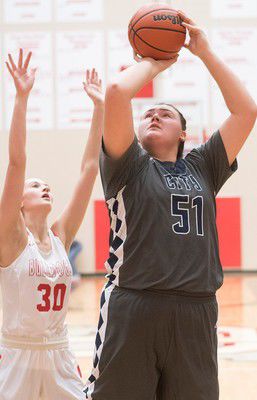 Photo by Robb QuinnHannah Noveroske finished her career as Michigan City's all-time leader in points and rebounds. The Indiana All-Star is now a freshman at Indiana University. 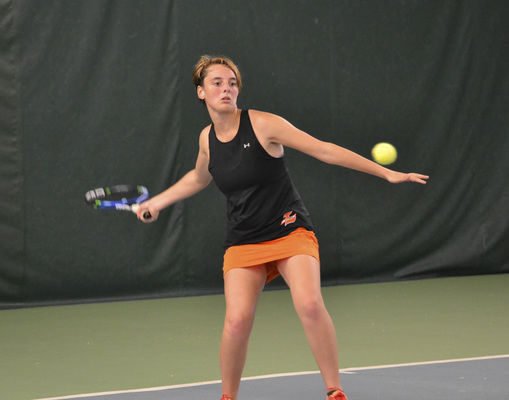 Photo by Zack EldridgeLa Porte’s Alaina Majors hits a return shot at No. 1 singles in the sectional final against New Prairie at the Northwest Athletic Club on May 16. 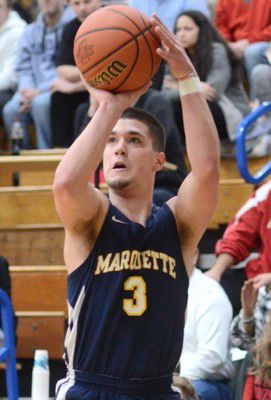 Photo by Robb QuinnJeremy Lowery went 3-8 in his first season as La Porte football coach after taking over for Dave Sharpe.

Photo by Zack EldridgeLa Porte boys tennis players celebrate after topping South Bend St. Joseph 3-2 to win their own regional at the LeRoy Courts on October 9.

Photo by Robb QuinnHannah Noveroske finished her career as Michigan City's all-time leader in points and rebounds. The Indiana All-Star is now a freshman at Indiana University.

Photo by Zack EldridgeLa Porte’s Alaina Majors hits a return shot at No. 1 singles in the sectional final against New Prairie at the Northwest Athletic Club on May 16.

La Porte County made a case for being the girls basketball capital of Indiana in 2019 as the Nolan sisters, Hannah Noveroske (Michigan City) and Riley Ott (La Porte) were all named to the Indiana All-Stars. Emma and Sophia Nolan finished their careers at the top of the Marquette scoring list with 1,969 and 1,964 points, respectively. Noveroske graduated as M.C.'s top all-time scorer (1,790) as well as its No. 1 rebounder, while Ott (1,486) wound up just eight points shy of the LP points mark held by Beth Lapaich. In addition to the Nolans at St. John's, Noveroske is playing at Indiana and Ott at Purdue-Fort Wayne. South Central also won a sectional, adding to the county's impressive resume' for the season.

What goes around comes around

When Tom Wells was let go at La Porte after a 19-7 season in 2016-17, he didn't rule out a return to coaching, only stipulating that it would take the right fit at the right place. After two years getting his hoops fix by officiating, Wells found his new home on the other side of the county at rival Michigan City. He brought on two former Wolves, Will Walker and Antonio Hurt, as assistants, as well as adding one of his former players, Jake Parker (Portage), to his staff. Adopting the motto '84 Fast,' Wells implemented a wide-open, fast-paced style that was an instant hit with his players. City raced to a 6-1 start, fueling hopes that the school can win its first sectional title in the consolidation era.

After flying under the radar in 2018, the New Prairie volleyball team didn't have the luxury of sneaking up on anybody in 2019, but the heightened expectations didn't hinder the Cougars, who rolled to another Class 3A regional title. NP downed host South Bend St. Joseph in the championship in four games, avenging a five-game loss to the Indians early in the season. The Cougars (29-8), coached by Jordan Staus, swept Kankakee Valley and West Lafayette in the Hanover Central Regional before falling to Bellmont in four games in the Plymouth Semistate. New Prairie junior Elise Swistek, a Valparaiso University commit, was the La Porte County Player of the Year.

Behind record-breaking quarterback Chase Ketterer, New Prairie went 11-2, attained the No. 1 ranking in Class 4A, defeated Penn for the first time, shared the Northern Indiana Conference title and won a sectional title before it fell to Hobart in the regional. The Cougars racked up some big numbers along the way, scoring at least 48 points seven times, and also had a flair for the dramatic with suspenseful wins over Mishawaka (28-27), Penn (21-17) and Plymouth (35-27), the latter in the sectional final. Ketterer, the county offensive player of the year, rushed for 2,496 yards and 33 touchdowns while passing for 775 yards and 10 scores. Chris Mays ran for 1,407 yards and 23 TDs. Brandon Kasinger (4.5 sacks, 12.5 tackles for loss) was the county defensive player of the year. The sectional crown was coach Russ Radtke's fourth in eight years at New Prairie.

A change at the top

La Porte football coach Dave Sharpe resigned last fall in order for his family to be closer to Indianapolis, where they had begun the Jacob Sharpe Foundation after the death of their infant son the prior summer. Sharpe was 26-17 in four years with the Slicers. He spent the 2019 season as an assistant at Hamilton Southeastern before recently accepting the head coaching position at Noblesville. Jeremy Lowery, previously the coach at Paoli, took the La Porte job and went 3-8 in his first season, highlighted by a sectional win over rival Michigan City.

Jack of all trades

A year after losing a bitter sectional semifinal to New Prairie, La Porte's boys tennis team made amends for that setback, and then some. The Slicers claimed the sectional title, including beating the Cougars 3-2 in a semifinal, and upended Duneland Athletic Conference stalwart Valparaiso, 4-1, in a regional semifinal. They came back a day later and ousted perennial power South Bend St. Joseph, 3-2, to capture their own regional, their first regional crown since 2007. La Porte finished with an 18-7 record and was one step short of state. Its improbable tourney run ended with a semistate loss to three-time defending state-champion and undefeated Carmel, who went on to earn its fourth straight state title.

La Porte's unprecedented success on the tennis courts began in the spring. The Slicers' girls tennis team captured an undefeated regular season with a 19-0 record. They finished a perfect regular campaign for the first time in 41 years to become the undisputed Duneland Athletic Conference champion for the first time in 40 years, while also earning their fifth consecutive sectional title. La Porte rolled through Marquette and New Prairie in the sectional, then followed by falling in a regional semifinal to stout South Bend St. Joseph, who advanced to state in 2018. The Slicers claimed an exceptional 21-1 mark and set many milestones along the way. Singles players Alaina Majors and Rachel Kaminski paced LP all season at No. 1 and No. 2, respectively.

La Porte graduate Charles Salary was named the NAIA Player of the Year after leading the Marian University football team to the national championship game. Salary was the star offensive threat for a Knights  team that averaged nearly 420 yards per game. The workhorse back ran for 1,697 yards and 18 touchdowns, eclipsing 1,000 yards for the third straight year. For his career, Salary amassed 4,729 yards and 45 scores. He graduates as the school's No. 2 career rusher. Top-ranked Morningside outlasted No. 2 Marian 40-38 to defend its title.

Marquette captured its fifth consecutive boys basketball sectional title, topping North Judson 59-49 in the 2A championship at Winamac. The Blazers suffered a 71-70 loss to eventual state champion Andrean in the regional. Colin Kenney eclipsed the school scoring record, punctuating his career with 1,884 points. The Marquette guard was an all-star snub, but is now playing at Furman.

South Central won its sixth consecutive Class A softball sectional, while the Satellites baseball team advanced to the regional for the fourth straight year. S.C. had two baseball players go on to play at the Division I level -- Kyle Schmack (Valparaiso), who was also named to the North All-Stars, and Carson Husmann. Satellites coach Ryan Kruszka stepped down to pursue another career opportunity and was replaced by Zach Coulter.

Michigan City's Justin Wozniak placed second in the state in the discus with a throw of 177 feet, 2 inches, while teammate Ryan Stefanko finished third in the shot put with a toss of 56-8. Also sectional and regional champions in, the Wolves pair graduated as the school record-holders in their respective top events.