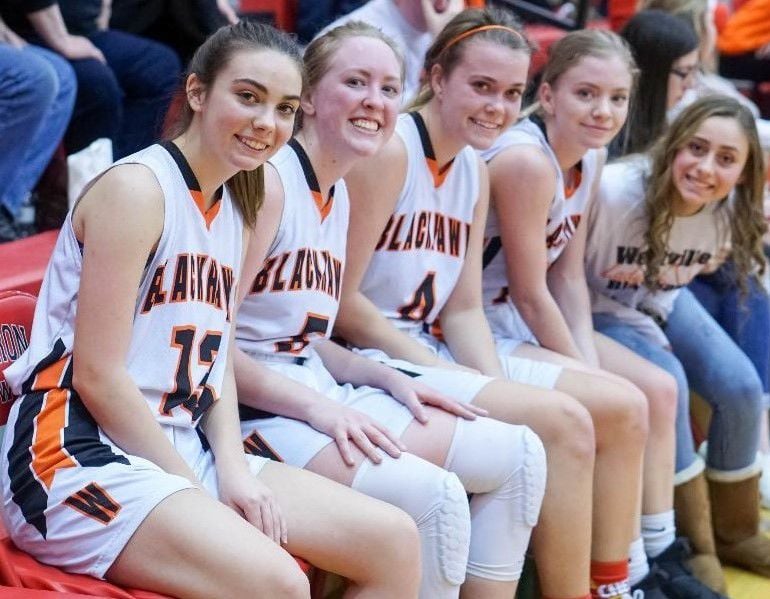 Westville seniors, from left, Chloe Fortune, Peyton Rodgers, Sarah Weston, Nicole Albers and Tina Horton played in their final game Friday at Hebron. The class is the first at the school to have four winning seasons. 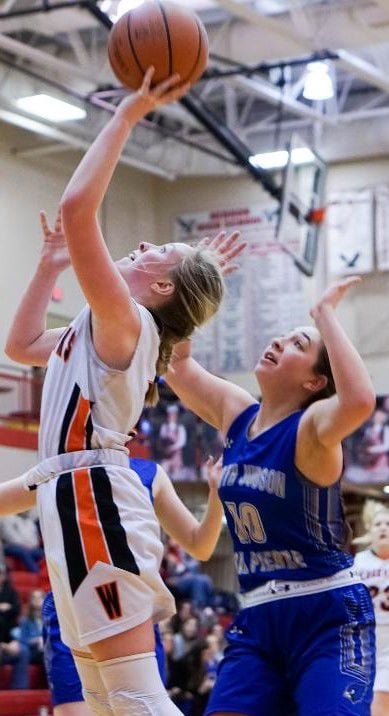 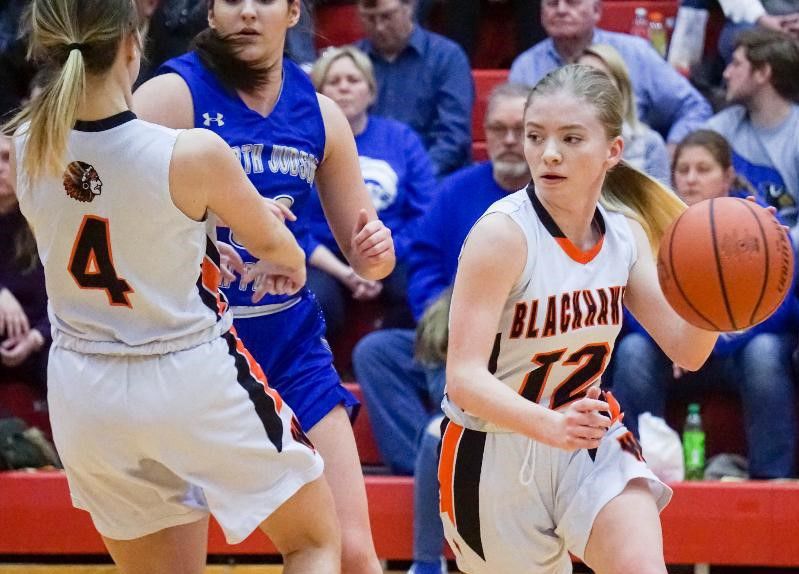 Nicole Albers dribbles around a North Judson defender Friday with the help of a screen by Westville teammate Sarah Weston.

Westville seniors, from left, Chloe Fortune, Peyton Rodgers, Sarah Weston, Nicole Albers and Tina Horton played in their final game Friday at Hebron. The class is the first at the school to have four winning seasons.

Nicole Albers dribbles around a North Judson defender Friday with the help of a screen by Westville teammate Sarah Weston.

HEBRON — As the Westville seniors began leaving the court in the final minute Friday, the outcome of its Class 2A Hebron Sectional semifinal with North Judson long since determined, the magnitude of the moment began to take hold.

“I definitely didn’t think it would hit me this hard,” Nicole Albers said. “I didn’t think I was going to cry, but I cried as soon as I got to the bench.”

The 55-38 loss to the Bluejays ended the hoops careers of the group of five, a point all but a select few endure as seniors. The difference here is the connection amond four of Westville’s five runs way deeper than high school.

“It’s harder because we’ve all been playing together since we were in fifth grade,” Peyton Rodgers said. “All of these years together and we’ve never been split. We see each other every single day.”

While attending a smaller school like Westville can make it difficult to have sustained athletic success, the beauty of it is kids really get to know their classmates. In this instance, Albers, Rodgers, Sarah Weston and Chloe Fortune haven’t only been on the floor together for eight years, they’ve been in school together for 12.

“Since elementary,” Weston said. “Most of us have classes together. (Basketball)’s the only sport we all play together. We talk about it every day, watching film, scouting report. It’s going to be different. Some of us are done with high school sports, so it’s weird.”

The exception in the group is Tina Horton, who moved to Westville from Alabama last summer, becoming the adopted senior, as it were.

“I’m just happy I got to spend my senior year with y’all,” Horton said.

Back in the warmth of June, July and August, the seniors didn’t know how their senior year was going to go. They didn’t even know, for a period of time, who their coach was going to be. Josh Goehringer took an administrative job elsewhere and was replaced by Kyle Stage, but Stage was gone before the school year.

In stepped John Marshall, who coached the program from the 1999-2000 season to 2011. He never had a winning season in his first tenure, an 11-11 finish in 2010 the best his teams ever did. Most of the girls had him as a teacher in sixth grade, so it’s not like he was a stranger, but it was the cohesiveness of the senior class that bridged the transition.

“I think it was the lack of practice we were able to have,” Rodgers said. “Definitely knowing how we played together as a team helped. If we didn’t know each other, it probably would’ve been tough.”

“We would’ve been a mess,” she said. “We usually do summer leagues, go to tournaments, have open gyms a couple days a week. We couldn’t do any of it.”

Undersized and short-handed, Westville raced to a 10-0 start before the teeth of its schedule took its toll – games with South Central (twice), Merrillville, Morgan Township and North Judson – and the Blackhawks, once 13-1, went 2-6 to close the season.

“Everybody’s a hard matchup for us at this level,” Marshall said. “We don’t have a lot of depth. We get tired. It’s been the story of the whole year. We walked a fine line every game. We’re not big and we’re not deep. We get in foul trouble, especially with Sarah, and we’re hurting. We just couldn’t get over that hump. It’s not from a lack of effort.”

It never was. Consistently out-sized with no one taller than 5-foot-10 junior Ashley Hannon, the Blackhawks had a narrow margin for error. It was the same Friday, when foul trouble saddled Weston and Hannon. Down double digits at the half, they scrapped in typical fashion to get within four in the third quarter, only, also in typical fashion, to hit the wall, and run out of gas.

“It must be the water,” Marshall said. “Our luck, we’d get a 6-5 kid and they’ve never played ball before, like, what’s this thing? I’m proud of ‘em. Our senior class was really good. They worked their tail ends off. They’re good kids. They got a lot accomplished.”

Westville was one win short of tying the school record (16) set in 1991. They had to cancel a game last Saturday at Argos as illness left them short on players. Still, the seniors will leave as the first class to enjoy four winning seasons, going 53-35 in their careers.

Without hesitation, though, their greatest pride came Dec. 6 when they seized the PCC Kup from LaCrosse. Westville hadn’t held it in 39 years.

“One thing we were working for since our freshman year was getting the Kup and we finally got it,” Weston said. “It was our dream.”

“We were so excited, we started decorating it that night,” Albers added. “We’re satisfied. We’re happy.”

Despite a few sniffles and some red, watery eyes Friday night, that sense of satisfaction came across from the Blackhawks seniors, knowing they did as much as they could possibly do.

College will take them in at least three directions. While Weston is going to Indiana State and Fortune either to Purdue or Indiana, Albers, Rodgers and Horton will attend Ivy Tech in Valparaiso for the next two years. With some help from social media, the bond of 12 years, eight of them on the court, will keep them close.

As they finished reminiscing, they put their hands together and yelled, ‘one, two, three, team,’ for one last time. Come Monday afternoon at 2:40, when the bell rings for the end of the school day, they’ll have to fight the instinct of heading to the gym.

They’ll all be missed, too.