Photo by Scott AllenMichigan City's Will Walker works inside during Sunday's game against Chesterton in the La Porte County alumni tournament. 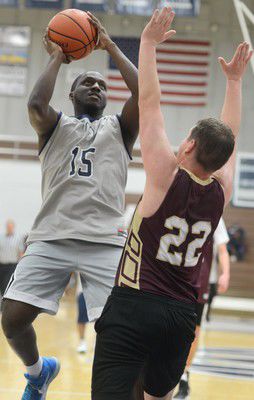 Photo by Scott AllenShereff Knight rises in the lane during the Michigan City-Chesterton game Sunday in the La Porte County alumni tournament.

Photo by Scott AllenMichigan City's Will Walker works inside during Sunday's game against Chesterton in the La Porte County alumni tournament.

Photo by Scott AllenShereff Knight rises in the lane during the Michigan City-Chesterton game Sunday in the La Porte County alumni tournament.

MICHIGAN CITY — Time doesn't diminish a rivalry, at least not when Wolves and Slicers are involved.

"I was telling Owen Streiter it feels just as good as a 37-year-old adult," La Porte's Nick Otis said. "I was guarding Vic Walker. He beat us on a last-second shot my senior year, we beat them in the sectional championship my junior year (2000). I'm glad (MC coach) Tom (Wells) organized this. It's a good fund raiser for their program. Every guy I reach out to, it was, 'Oh, I can't wait.'"

LP won 79-72, holding off City after blowing a double-digit halftime lead. Zach Stewart's 3, one of three he hit in the fourth quarter, tied the game at 65, but Gage Ott's tip-in touched off a decisive 10-0 La Porte run that featured two Jacob Jones treys.

"That was fun," Ott said. "A bunch of Michigan City guys play in a La Porte league so we play against each other all the time. It was fun to compete with them. It's big-time pride. I hate to lose. I'm a big-time competitor. It's ultra competitive as soon as you see those two logos. We didn't get any trophies, but we've got a lot of bragging rights that are going to be around for a minute. It was pretty cool to come back here and play."

Ott last ran at the Wolves Den in 2014, when the Slicers fell to Lake Central in a regional semifinal. The result was better this time for him and former teammate Josh Fleming.

"It's cool coming back here," Fleming said. "Everybody knows the rivalry. Being graduated, a little older, it's competitive, but there's no disrespect or anything. We just come out and compete at a high level. It's a good time. Most of us play together three, four times a week, so the chemistry is already there. We come out here, it's just a walk in the park. It's what we do. We got a whole year of bragging rights. We never would've heard the end of it (if we had lost)."

Like most of his teammates, 2002 LP grad Jeremy McCelos hadn't been in City's gym since high school.

"Maybe once," he said. "We knew they weren't going to let that go down in their home building. That's not them. They were going to make a run, but we held it together. It's one of those things where you get the bragging rights at the end. We're gonna make sure they know."

"That's about all I can do anymore," said Otis, an attorney in La Porte who played in college at Belmont. "I don't play any defense. I think I had some good games here. I really got my scholarship because of a game here. Belmont came to watch Steve Drabyn and I had a really good sectional. It was fun coming and playing in this gym. Everybody loves playing here. It's one of biggest gyms in the United States. (Michigan City's) really good. They're probably younger and more athletic than us. We're all pretty unselfish guys."

"We'll have to figure something out so we can play them ASAP," Will Walker said. "We didn't play great perimeter defense in the first half, which caused for some late rotations, which caused some wide-open jump shots and they're a 3-point shooting team. That put us in a hole really early. We tied it but the bodies got tired. We got back there and lost the gas."

Hurt had 18 points and Vontrell Jones 15.

"Michigan City versus La Porte, every time they come that way, you want to beat 'em," Walker said. "Even in the rec league, they're usually hard-fought games. Even though they may be down in the middle of the mix and we're at the top, when that game comes, everybody's on top of their game. A rivalry's a rivalry. It's always going to be that way."

A crowd of 171 attended the event, which also featured Chesterton and Westville.

"It was a good turnout," Walker said. "I'm happy a lot of people came out. It seemed like they enjoyed it. It seems like it's something we should keep doing for years to come."