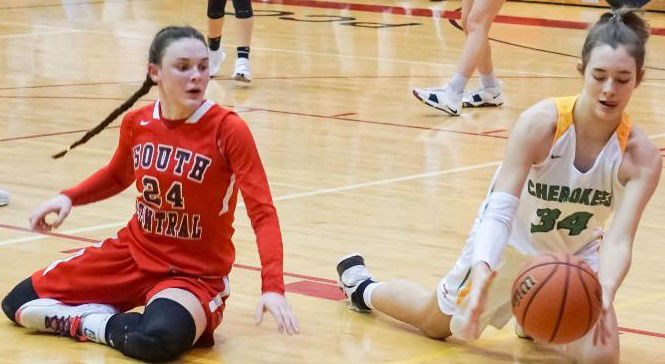 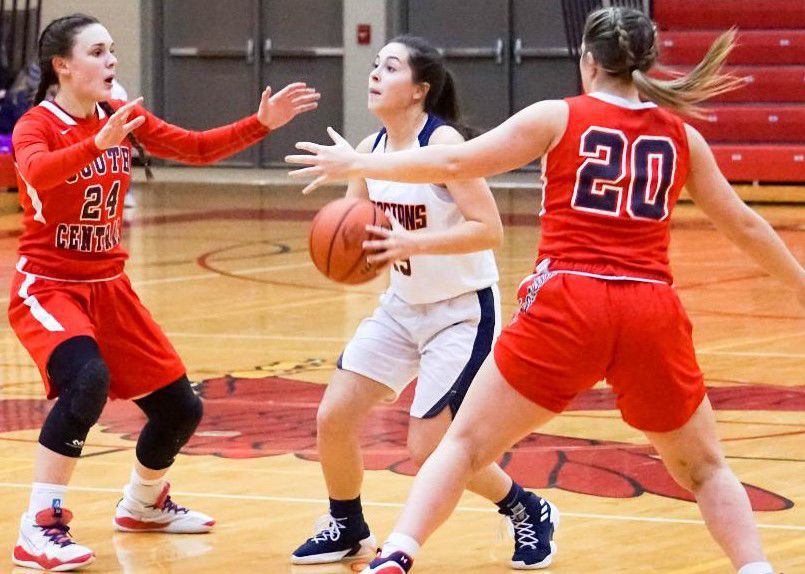 Abbie Tomblin tore the labrum in her left shoulder last April, and while the South Central sophomore guard is fully recovered following surgery a month later, there are still some hurdles to clear.

“It doesn’t really bother me a lot, but there’s still a little mental block there,” Tomblin said. “It took a while to get adjusted to it, to get back into the game. I feel like I’m always shielding it. I don’t want to get hit. It’s weird. I tell myself no, but some part of me still feels I want to be smart with it.”

S.C. was playing a softball game last April when Tomblin, a shortstop, ranged back into shallow center field for a pop up. The good news was she caught the ball. The bad news was she landed awkwardly on her left shoulder.

“It hurt, but I didn’t really think about it,” she said.

At a basketball tournament that weekend, Tomblin noticed the shoulder bothering her, but didn’t say anything to her coaches. She went to the doctor, had it x-rayed, and was told it was probably just overuse. The following weekend, during another tourney, it was even worse.

“It was the worst pain I’ve ever felt,” Tomblin said. “I consider myself to have a high pain tolerance, and I was almost crying on the court. I couldn’t even jump rope before practice. I got taped and wore a long-sleeved shirt, but it was unbearable by the end of the weekend.”

This time, an MRI was done, revealing the labrum tear.

“My mom’s a nurse, she saw the MRI on the screen and said, that doesn’t look normal,” Tomblin said. “I started bawling. It was the worst feeling ever. I wasn’t expecting anything bad. I have multi-directional instability, loose ligaments. It’s good because it allows me to do things other people can’t do, but my bones pop out a lot. I don’t really notice it anymore. It also made me more susceptible to tearing my labrum.”

When her surgery was scheduled for May 20, Tomblin was already counting the months, weeks and days.

“They said, you’re young, you’ll bounce back from it quick,” she said. “Six months put me right at November. I was just mad because it was May 5 and 15 days is a lot.”

During the out-patient surgery, Tomblin had nine small, plastic screws inserted into her shoulder and the ligament was also tightened to give her more stability. The timing of the operation wasn’t ideal with finals going on and Tomblin loopy from her medication, also unable to use her left (writing) hand.

“I came to school one time,” she said. “It was terrible. My Math final, someone had to write for me. It took like two-and-a-half hours. I wasn’t on my medication at the time.”

The recovery took an emotional toll on Tomblin, too. Depressed about the situation, she’d sit in her room and cry. She lost her appetite and dropped about 20 pounds.

“In seventh grade, I was playing travel basketball at the Courts, I went up for a layup and came down on a girls foot,” Tomblin said. “I broke the fifth metatarsal in my foot. I was out for a couple months. Mentally, it took me a while to come back from that. It was the same thing with my shoulder.”

Slowly but surely, Tomblin was released for increased physical activity, eventually getting her last clearance Nov. 7, two days before the season opener.

“It felt so freeing,” she said. “I was so worried, I was hounding him, when am I going to get released? It was such a long process. I was in a sling six weeks. It was so bad, I couldn’t do anything. I couldn’t swim. I had to walk really carefully. I had a weird tan line. When I ran a mile, I was so out of shape. It makes you appreciate it more, the time you have.”

Satellites coach Wes Bucher knew he had to temper expectations for Tomblin, who had stepped right in to a key role for S.C. as a freshman.

“There were some moments last year where I was like I don’t even know how she’s getting the ball to the rim and she’s able to get the ball in there,” Bucher said. “The problem is, not being able to do anything at all for six months, it really slows you down. When you miss a couple months, you’re not going to see the things you saw before. It’s a stumbling block. She wants to be further along than what she is. She’s so competitive, she sets some astronomically high goals for herself, which is wonderful. No one is going to stop her from doing that, but sometimes, I think she gets deterred in not hitting them at the point she wants to.”

After a solid start to the season, Tomblin hit a rough patch where she scored in single digits five times in a span of seven games. It might have gone unnoticed in a lot of cases, but given what Tomblin did as a freshman (9.8 points, 3.6 steals, 3.2 rebounds, 2.4 assists, 1.1 blocks per game), she knew and Bucher knew.

“She sees the numbers,” he said. “Getting bumped is affecting her every once in a while. I told her, look, kid, those goals have to become team goals. It’s not that she’s not team-oriented, she 100 percent is, it was just affecting the way she was playing. She was trying to force the issue. We’ve been trying to push her to get to the basket instead of settling for jumpers. She’s doing it. If the shots aren’t falling, you’ve got to be multi-dimensional. From that point, she started attacking and kicking the ball instead of forcing one up into the trees. That is big. Even last year, at her high point, she would put that shot up.”

So while the points (11 per game) haven’t soared, the assists have climbed.

“For us, that’s a big moment,” Bucher said. “We have that point guard, that top of the key person, someone willing to not only drive and score. It has been a blessing in its own way. She’s added passing back into her game. I would say she’s about 90 percent right now. When all’s said and done, she’s going to 100 percent overcome this. She just needs to keep pushing herself. Something about her game, when she hits that physicality, the point where she’s fully invested in what she’s doing, it’s hard to stop her, with how ambitious she is.”

Tomblin hasn’t been taping her shoulders for about a month, just wearing a long-sleeved Dry Fit shirt for some security. She will focus on basketball going forward, and believes her travel season, which she missed due to the injury, will springboard her into her junior year.

“I’m still limited in what I can do,” Tomblin said, showing the difference in range of motion between her arms. “The (NWI) Thunder season always helps me getting prepared. It’s not that I want this season to end, but I can’t wait get back to Thunder. Basketball is my passion. I love all my teammates. I haven’t played with them in about a year. In the summer, we play a lot of competitive teams. It’s really physical. Once I get back to that, I feel like next season I won’t have as much of a mental block. I think I will overcome it.”