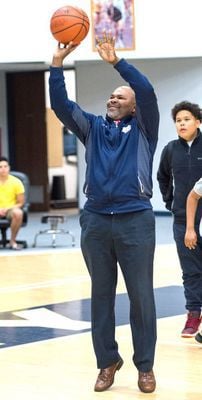 File photo by Scott AllenMichigan City boys basketball coach John Boyd has always been memorable for multiple reasons, including his reluctance to play Marquette despite every other sport at the two schools playing each other. 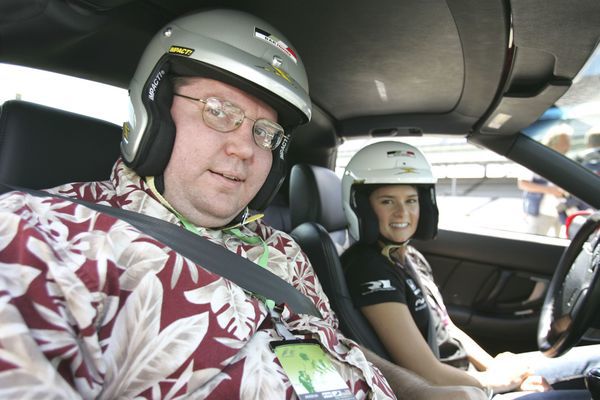 File photo from Bar HondaYes, that's me in a trademark Hawaiian shirt back in 2005 as I got the chance to ride in a Honda NSX sports car with Danica Patrick at Indianapolis Motor Speedway the week of the United States Grand Prix Formula One race. 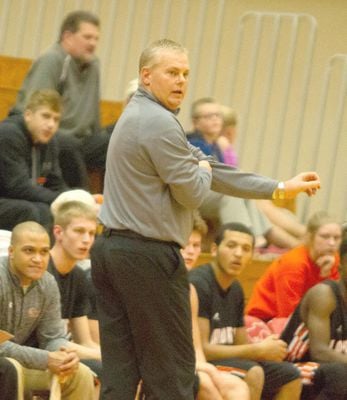 File photo by Charles MitchellFormer La Porte boys basketball coach Tom Wells is part of a not-so-fond memory as he was unfairly voted to not be retained last year by the La Porte School Board.

File photo by Scott AllenMichigan City boys basketball coach John Boyd has always been memorable for multiple reasons, including his reluctance to play Marquette despite every other sport at the two schools playing each other.

File photo from Bar HondaYes, that's me in a trademark Hawaiian shirt back in 2005 as I got the chance to ride in a Honda NSX sports car with Danica Patrick at Indianapolis Motor Speedway the week of the United States Grand Prix Formula One race.

File photo by Charles MitchellFormer La Porte boys basketball coach Tom Wells is part of a not-so-fond memory as he was unfairly voted to not be retained last year by the La Porte School Board.

Saying goodbye is hard to do in most situations. After living in Northwest Indiana for 46 of my 47 years on this Earth, I can honestly say some tears rolled down my cheek as I wrote this — my final Gorch on the Porch column.

But then I thought about the 12 straight days of 15-degree or lower temperatures we had around the holidays, and the 15-plus inches of snow we got last weekend, and I wanted to sing Janet Jackson’s hit song with an added word: “Miss You Much … NOT!”

In the last week while out and about I’ve had a woman behind a store counter say, “I love the snow and winter,” and a man park his 4x4 pickup truck next to my fuel-efficient compact car last week during our days-long snow and ask, “Having fun in that little thing?” I said ‘No’ and he responded with “I’m having fun in my 4-by-4.”

I wasn’t quick enough to respond with, “My little car will be just fine in 80 degrees and six inches of sun while your truck would be meaningless.”

Yep, you guessed it. After three years at The News-Dispatch and Herald-Argus, almost 19 years at multiple newspapers in Northwest Indiana and 15 different jobs in my lifetime — including a good old-fashioned paper route when I was a kid growing up in north Hammond — I’m headed to the home of the 2017 College Football National Champion.

No, not Tuscaloosa, Alabama. That’s the fake national champ. After being away from my wife and son for six months, I’ll be living in Orlando, Fla., home of the undefeated Central Florida Knights.

And so is Florida. It was a quest of my best friend and former News-Dispatch and Herald-Argus photographer, Charles Mitchell, to relocate to Florida. He died on Nov. 4, 2016, so it’s my job to follow his dream while he’s looking down upon me.

It’s also been a goal of my family to eventually move to the Orlando area with at least one of us working for Disney. That would be my wife, while I will be employed by NBC Universal, which is Disney’s competitor.

I’ve always wanted to sleep with the enemy.

I won’t miss the weather or the terrible air quality or myriad other nauseating things I’ve had to deal with in this business. But there are plenty of things I will miss and some fond memories as an ink-stained wretch.

So many high school events I fondly remember covering …

Hanover Central and Lake Central winning the softball state title in the same year in 2004.

Gary West Side winning the boys basketball state title in 2002, led by current Michigan City coach John Boyd, who had much more hair (and very stylish) back then.

And Marquette’s state title in 2014, which I covered for the NWI Catholic newspaper after I was unceremoniously laid off from another region paper a couple weeks before.

Outside of the state titles, there’s plenty of other events I’ll truly miss, such as the New Prairie Cross Country Invite and the Porter County Conference basketball tournament.

I’m sure I missed a name or two or five, so don’t hold it against me.

I’ll miss dealing with La Porte athletic director Ed Gilliland. He’s a class act and one of the best in the state. But I won’t miss the La Porte School Board, which wrongly let boys basketball coach Tom Wells go when there was clearly a conflict of interest among a pair of the board members.

I’ll miss going to cover events at several schools for multiple reasons, whether it's the ambiance or people or extracurricular perks (such as doing the North Newton football preview in early August after stopping at Fair Oaks Farm to grab a pint of awesome ice cream). Football games at Munster are awesome with head coach Leroy Marsh's wife cooking for media members in the press box. My mouth waters just thinking about it.

I mostly covered prep sports, but the occasional pro coverage will stick in my memory forever.

I covered Tiger Woods winning the Western Open at Cog Hill in Lemont, Ill. I really think this item helped me get an interview for my new job in Florida.

I was within three feet of Miami Heat coach Pat Riley, interviewing him after a Bulls playoff game.

I had a one-on-one interview with Bulls vice president John Paxson in January, 2006, at around 10 a.m., at the Berto Center in Deerfield, Ill., for a story on Gary Steelheads (CBA team) player, Randy Holcomb, who was picked up by the Bulls on a 10-day contract. I still recall Paxson having disheveled facial hair and strong coffee breath.

I covered multiple NASCAR races at the Brickyard and Chicagoland Speedway, witnessing Jeff Gordon, Tony Stewart, Dale Earnhardt Jr. and Jimmie Johnson win. I also was on hand for Juan Pablo Montoya’s press conference announcing he was switching from Formula One to NASCAR.

I also covered the F1 United States Grand Prix at the Brickyard, and as part of that coverage in 2005, I got the chance to ride next to Danica Patrick (fresh off a fourth-place finish in her Indy 500 debut two months earlier ... see attached photo as proof) in a Honda NSX sports car going about 140 miles per hour. By the way, my wife didn’t speak to me for two days after that.

I covered Merrillville High grad Mike Neal’s first two days in Green Bay Packers training camp in 2010 (yes, the year they eventually won the Super Bowl, so I’ll take credit for that). While waiting in the locker room for Neal, I glanced to my left and saw Aaron Rodgers getting dressed.

I might be the only person in the entire world who rode a racecar with Patrick and witnessed Rodgers getting dressed, and now they’re dating. This tidbit might have helped me get my current job since it came up in my second interview.

So many coworkers I will never forget.

There’s my last boss, Adam Parkhouse, who is easy to work with. But I’ll still remember the column he wrote saying that bowling isn’t a sport, and the response column I wrote while at another newspaper (though I'm not proud of actually challenging him to a game of bowling as a younger, sometimes arrogant writer). After all, I’ve covered 18 of the 19 Indiana High School Bowling state finals, and bowling is my top participatory sport — I have 17 career 300 games, six 800 series and was named Lakeshore Bowling Association bowler of the year in 2011, though I’ve been shot down in recent years while on the ballot for that association’s hall of fame (oops, there's the arrogance returning for a moment).

I’ll never forget John O’Malley, Anthony Nasella, Mike Hutton, Michael Osipoff, Chris Luchene, Aaron McKrell, John Mutka, Michael Raines (who will be about an hour away from me in Florida, so I can visit him in the sun), Kevin O’Keefe, Greg Smith, Jim Peters, Al Hamnik, Jon Gard, Tom Wyatt, Jeff Majeske, Jeff Mayes, Cindy Galligan, Kate McGowan, Matt Fritz, Rich and Isis Cains (from separate newspaper jobs), and the newest addition to my newspaper list of coworkers, Mike Whitlow, who is a great guy and has a bright future in the business.

I may be getting old with 50 coming up in a couple years, but I truly feel rejuvenated … and warmer since the temperature is around 83 degrees where I will be.

I’ll be back to visit since I still have a handful of friends and relatives in the area, but it will likely be in the spring, summer or fall since I’ve had enough winter for a lifetime.

Thanks for the memories, good and bad. And for you golfers, whenever you play a round, keep me in mind.

You can think of former sports editor Steve T. Gorches when you look at trees with no leaves during winter in Northwest Indiana. You can still email him at sgorches@gmail.com or follow him on Twitter @SteveTGorches.