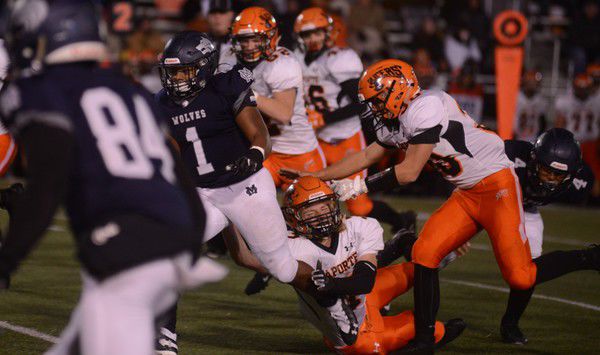 Photo by Scott AllenMichigan City's Jonathan Fleminigs breaks free from the La Porte on defense on a 34-yard run in the third quarter of Friday's game at Ames Field. 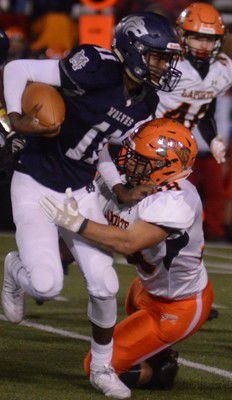 Photo by Scott AllenMichigan City's Jonathan Fleminigs breaks free from the La Porte on defense on a 34-yard run in the third quarter of Friday's game at Ames Field.

No wonder the Slicers were so thrilled after scoring the game-winning touchdown with 3:59 left to knock off their rivals, 14-10, in a Class 5A sectional semifinal at Ames Field.

“This is the most happy I've ever been,” La Porte senior linebacker Zach Purnell said. “Losing to these guys all through high school, and then coming out on their own field and beating them as a team, not just one player. All of us sticking together, not ever backing down.”

To put in perspective the Wolves’ recent domination over the Slicers, they were averaging more points per game (36.5) than La Porte scored in those four contests combined (28).

On Friday night, the Slicers exacted some revenge, spearheaded by their tremendous defense.

“I'm so stinkin' proud of our kids,” first-year Slicers coach Jeremy Lowery said. “I'm so proud of how they continued to battle. But it's no surprise. That's what our kids have done all year long. It's been a grind since Day 1.”

Quarterback Robbie Kiner connected with a wide open Justin Forker in the middle of the field on a 18-yard touchdown pass with just under four minutes remaining on second down and 13. That put La Porte (3-7) ahead 14-10 after Javier Robles' extra-point kick ensured City (4-6) needed a touchdown.

“We sat on it all game long,” Lowery said. “We wanted to get in the right moment when we could use it. We've worked on that for two weeks and we had a really nice feeling it was going to be really good. (Assistant) Coach (Bob) James started the whisper for it. As soon as I heard it, I knew where we were on the field, it was time.”

Forker said he asked for the play before halftime but didn't get it.

Just two plays earlier, the Slicers' Isaac Alexander pounced on a Jonathan Flemings fumble to set up the game-winning score at the Wolves' 15-yard line.

Trailing by four late, City tried to mount a rally, moving the ball down to the visitors' 34, almost exclusively on passes. But La Porte's defense held on fourth down and 5, forcing an incompletion to turn the ball over on downs. That set off a wild celebration on the Slicers' sidelines.

Most of the night, La Porte's defense was swarming to the ball and severely limited the Wolves.

That permitted the visitors to build an early 7-0 cushion and control most of the contest.

Lowery singled out Alex Lewis, Connor Stalbaum and Jacinto Garcia for playing on both sides of the ball.

"Those guys up front had to do a lot of double duty tonight," he said. "Jamaal Salary played out of position. He played a different spot. He had to get ready for that. Hats off to those guys. When you play defense like that, it's a group effort. We held up well in the back end."

The linebacking corps of Purnell, Jaden Browder and Gavin Zolvinski were pivotal as well, as La Porte had numerous tackles for loss and held City to 165 yards of total offense.

The usually run-dominant Slicers also used a balanced offensive attack. Kiner, who was starting in place on injured starting signal caller Collin Bergquist, was effective. He finished 7-of-10 passing for 101 yards with a touchdown.

After a Wolves punt, La Porte struck first, scoring on its second play from scrimmage as Jeremiah Ruiz raced 73 yards untouched up the middle to build a 7-0 lead a little over four minutes in.

Most of the opening half, La Porte’s defense seemed to have the home team out of rhythm offensively.

Zolvinski recovered a fumble on City’s second possession at its 42-yard line, but the Slicers couldn’t capitalize and were forced to punt. Leland Fergueson had an interception at its own 29-yard line to quell a Wolves’ threat.

Midway through the third, the Wolves' offense came alive. They took advantage of a short field after a poor punt to tie the contest, 7-7. Kaydarious Jones had a 4-yard TD run to the right side to knot the score. Flemings set up that touchdown with a 34-yard run to the 6.

City's defense followed by forcing three plays and a punt, another shanked boot that set up the Wolves inside La Porte territory. The home team parlayed that into Nathan Stevenson's 34-yard field goal to make it 10-7 City with 8:27 to go. Flemings had an excellent 27-yard run on the drive, switching sides of the field from left to the right when it appeared like he was going to be tackled for a loss.

The Slicers responded, though, eventually getting the key fumble and game-winning TD late to prevail.

"Our kids played hard," Mason said. "It was a tough loss, a tough year. You can't take anything away from La Porte. I thought we made a few plays, they just made a few more. They've played pretty hard the whole year. It's definitely a feather in their cap."

Ruiz paced the Slicers with 88 yards rushing, including averaging 11 yards per attempt, with a touchdown. Forker led La Porte in receiving with 51 yards, while Grant Ott-Large was reliable with four catches for 41 yards.

Flemings guided City with a game-high 114 yards on the ground. Gio Laurent went 9-for-21 passing for 56 yards with one interception. Demetrius Garrett Jr. paced the Wolves with 38 yards receiving on six catches.

La Porte next hosts perfect Valparaiso (10-0) in a Class 5A sectional final next Friday night. The Vikings thumped Munster 69-6 on Friday night.

"This is the best victory of the year," Forker said. "Michigan City's always our rival. We just came out ready to play and we beat them. It went down to the final moments and we outplayed them."

The Slicers’ Jeremiah Ruiz rushed for 88 yards and a touchdown.