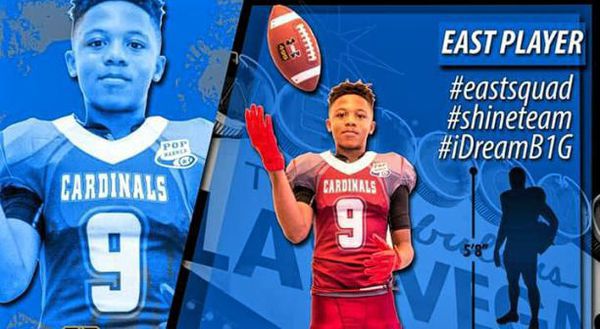 Jaden Hart will be one of 50 sixth-graders from across the country playing in Las Vegas this weekend for the Diamond Sports All-American East/West Bowl. 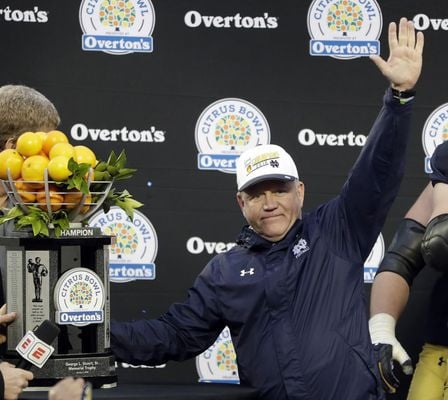 Notre Dame head coach Brian Kelly has won 67 percent of the 172 games he's coached since taking over in 2010.

Jaden Hart will be one of 50 sixth-graders from across the country playing in Las Vegas this weekend for the Diamond Sports All-American East/West Bowl.

Notre Dame head coach Brian Kelly has won 67 percent of the 172 games he's coached since taking over in 2010.

I'm fully expecting Pop Warner stud Jaden Hart to have a football scholarship waiting for him after this upcoming weekend and then help Michigan City win another sectional title or two before he heads off to college as a five-star recruit in the 2025 class.

Hart, a sixth grader in Michigan City, has been selected to represent the East roster at his grade level for the Diamond Sports All-American East/West Bowl this upcoming weekend.

He'll be an impact playmaker for Notre Dame head coach Brian Kelly in eight years. There's no doubt in my mind.

•Speaking of Notre Dame football, let's just end this argument before it even starts again: there's no such thing as "bowl game momentum". Just because you win a bowl game and finish a season with 10+ wins, doesn't mean you're going to be a playoff favorite next year. So no, Notre Dame isn't going to make the playoff next season and that's with an easier schedule than in previous seasons in 2018 and the No. 8 overall recruiting class, according to 247Sports.

There's more to it than that. When you factor in the Irish are losing Josh Adams, Mike McGlinchey, Quinton Nelson, Equnamious St. Brown, Durham Smythe, Greer Martini, Nyles Morgan and potentially Alize Mack to the NFL draft and/or graduation, along with your two top assistants in offensive line coach Harry Hiestand to the Chicago Bears and defensive coordinator Mike Elko to Texas A&M, that's hard to overcome the very next season.

Chase Claypool is Notre Dame's top receiver coming back and he missed the Citrus Bowl win over LSU with shoulder surgery. Brandon Wimbush is the Irish's top returning rusher and he may not be the starting quarterback come Sept. 1 against Michigan, who returns to Notre Dame's schedule for the first time since 2014.

This year won't get any easier for Brian Kelly. He bought himself some time with an overachieving 10-win season this season, but another tough challenge awaits him in 2018, even with the talent he does still have. (Hello, Miles Boykin.) Notre Dame won't be bad enough to finish 4-8 again, but if they're not near the New Year's Six bowl hunt, could next season be Kelly's last in South Bend? I thought that this season and I'm still thinking that for next season.

•As for actual teams that will make the playoff next season, that finish to the Alabama-Georgia title game was one of the best and one of the most head-scratching finishes you'll ever see. A walkoff bomb down the sideline from a lefty freshman quarterback who came in during the second half to win a title? There's only two people that can get that to work for them: Bill Belichick and Nick Saban.

The beautiful thing with the title game is that you don't have to watch the single broadcast. You can be like myself and many others that are sports nerds and watch the Coaches Film Room. When they ran that play back, you can see Tua Tagovailoa look off potential All-American safety Dominick Sanders like he's Tom Brady and throw an absolute strike for the win. I was entirely confused when on 2nd-and-26 in overtime, Georgia let a receiver run completely free down the left sideline! How do you play two high safeties and allow that to happen?! Good ol' Mel Tucker, right Bears fans? (Also, Duke head coach David Cutcliffe called Alabama winning the title on that play.)

I felt terribly for Georgia because some friends of mine are Georgia fans, Monday was virtually a home game for them and in Kirby Smart's first season, he had a chance to win the Dawgs' first title since 1980 when some running-back-turned-MMA fighter named Herschel Walker led them to a perfect 12-0 record, including a 17-10 Sugar Bowl over ... Notre Dame.

•Let's make some NFL playoff picks that you can call me out on when I'm wrong: Falcons over Eagles, Patriots over Titans, Steelers over Jaguars and Vikings over Saints.

I'm here for the potential revenge story 20 years later for the 15-1 Vikings' 1998 NFC title game debacle. Gary Anderson (who hadn't missed a kick all season) missed a 39-yard field goal with the Vikes up seven late in the fourth quarter and a dropped interception from All-Pro safety Robert Griffith would've iced the game. Instead, the Falcons survived in overtime, did the Dirty Bird all over the old Humphrey Dome and then got destroyed in John Elway's final NFL game.