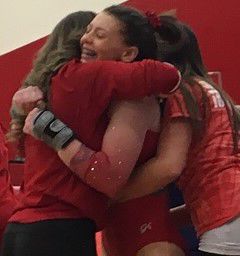 Makenna King of South Central gets a round of congratulatory hugs after scoring 9.9 on vault in Saturday’s Portage Regional. The Satellites sophomore won the event, two others and the all-around with a record 39.125. 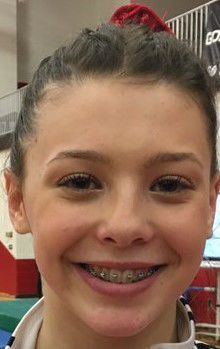 PORTAGE — About a year ago, in the midst of Makenna King’s low point of her promising, young gymnastics career at the Valparaiso Regional, her mom Corey told the 14-year-old she had to experience such a failure in order to ultimately achieve her goals.

“She was mad at me for a long time after that meet,” Corey said. “She didn’t want to hear that.”

It was a stark contrast, an 180-degree difference, from Saturday’s Portage Regional, when the South Central sophomore sparkled like a diamond, setting a meet-record with an all-around score of 39.125 that included firsts on balance beam (9.8), floor exercise (9.85) and vault (9.9).

“Amazing, absolutely amazing,” Makenna said, admitting that, yes, she was mad at her mom and, yes, she was right. “It was a great comeback. It was phenomenal. I’ve never hit all four events in a meet this year, so this was extra, extra good. I cried before bars, but I just told myself I could do it. I took some deep breaths. I had what I had and if I didn’t, I didn’t. I couldn’t change it. All I had to do was just do my skills.I didn’t come out here expecting to win, it was just 37.225 and that’s it, and whatever happened, happened.”

The 37.225 represented the qualifying score for the state meet.

By the time King reached vault, her final event, all she needed was a modest 8.05 to match that mark. Suffice it to say, she exceeded it, nearly claiming a second perfect 10 to go with the one she garnered on vault earlier this season.

“Her power really comes into play there,” Garcia said. “She can really use her body. It’s one and done, you run down and you do it. Everything else has more margin for error, you can fall on beam, stub your toe on floor and trip, you’re flying around on bars. It’s not just having wow stuff, it’s how she presents it. Makenna has a style and power to her that you just don’t see in a lot of kids. She just goes 150 miles per hour going down that vault runway, going into that double back. That’s what I tell her, go 150, please. She knows what I mean. Her first one would have been a 10 if she hadn’t taken that step. She was too close to the vault.”

Merrillville coach Diane Roberts, who had judged vault and given King her 10, thought otherwise, flashing fives with both hands.

The day started in comparatively modest fashion with a 9.575 on uneven bars that would ultimately stand for third place.

“She was a ball of nerves coming in. She had a fall during warm-ups and actually knocked the wind out of herself,” Garcia said. “She was a little bit apprehensive. It was her first event. That’s where you have to get those jitters out. She’s still human. Falls happen. She’s not part alien, I promise. She’s not bionic. She practices hard all week long. She was really tired, so we let her have (Friday) off. I think that helped bring some of that energy down.”

King’s remaining three scores were a scant 0.35 away from numerically perfect.

“It’s a confidence builder for her,” Garcia said. “She needed it.”

The beam performance was especially satisfying for King.

“I’ve never hit my beam routine and I did,” she said. “My back handspring layout series, I never make it. I went in the gym and worked really hard. Just be confident. Let my body take over.”

In the end, she wound up 0.425 ahead of two-time state champion Mia Pak of Chesterton with fellow Trojan Sophia Hunzelman, the 2018 all-around champ, tied for third with 38.475.

“Going to state was my goal; just make it there and whatever happens, happens,” King said. “I’ve already made my goal. I’m excited for the experience. I don’t expect (to win), just hit four for four (routines) the best I can do.”