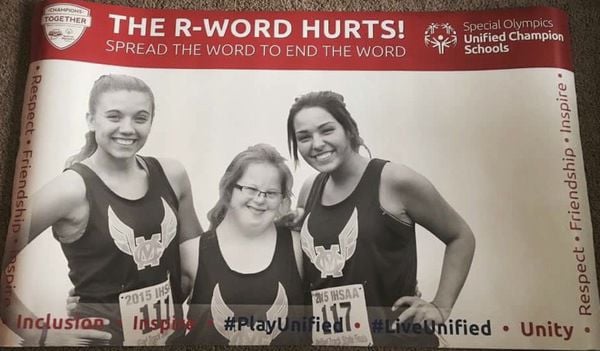 Photo of IHSAA banner provided by Jennifer Winski-HeathThe IHSAA released banners last fall promoting its unified track and field program while also providing a strong message about not using 'the R-word' to describe any special needs athletes. Michigan City athletes (from left) Kasey Pawlik, Libby Heath and Marissa Tilden are seen on one of the banners that hangs in the La Porte County Auditor's office. 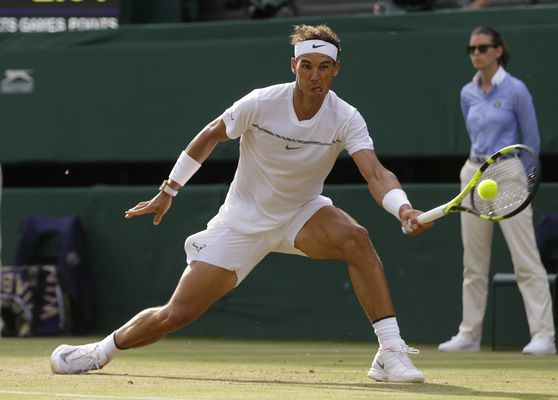 Photo of IHSAA banner provided by Jennifer Winski-HeathThe IHSAA released banners last fall promoting its unified track and field program while also providing a strong message about not using 'the R-word' to describe any special needs athletes. Michigan City athletes (from left) Kasey Pawlik, Libby Heath and Marissa Tilden are seen on one of the banners that hangs in the La Porte County Auditor's office.

The banner was released last fall after they competed in unified track the previous spring, and it features Heath in the middle between City teammates Kasey Pawlik on the left and Marissa Tilden.

It’s definitely a cool thing from the IHSAA and provides plenty of pride for the kids and their families.

“Not only do I have a photo, I have three copies of the actual banner if you’d like one,” Libby’s mom, Jennifer, said when I asked for a photo of the banner.

Across the top of the banner it reads, “The R-Word hurts. Spread the word to end the word,” referring to a word that has been used over the years to describe people with special needs.

The unified track program is one of the IHSAA’s banner — pun intended — achievements allowing students who wouldn’t normally be able to compete in sports to now proudly call themselves student-athletes. And many of those athletes turn into adults faster than others. Take Heath, for example, who graduated in 2016.

“She came back to assist with the first few unified track practices (in 2017),” Jennifer told me. “She loves being on the poster, helping promote unified sports.

“As parents, we’re extremely proud of her accomplishments. Libby has always had a way of reaching the goals that she has set for herself.”

If you want to see the banner in person instead of asking Jennifer Heath for one of those extra copies she has, you could stop by the La Porte County Auditors office in La Porte where one hangs, and then compliment the auditor, Jolie Winski, who is Jennifer’s mother and Libby’s grandma.

• Greatest Wimbledon ever?: Maybe you haven’t noticed, but the annual fortnight of tennis in England could be the greatest ever, based on the numbers — at least on the men’s side of the draw.

I love tennis grand slams, but there’s just something about Wimbledon that makes it more special than the messy clay of the French Open or the hardcourts of the Australian Open and U.S. Open. Granted, I still watch all of them loyally, even when the air time of the Australian and French aren’t exactly convenient — like 3 or 4 a.m., for the first 10 days of the event.

Wimbledon is slightly better, starting at 6 a.m. the past week with Sunday off. Now we get into the final 16 and I will be watching every men’s match intently, just like former Michigan City and current La Lumiere tennis coach Earl Cunningham.

That last part refers to Roger Federer, the Swiss star who continues to add to his title of greatest men’s player ever.

Now before anyone calls me sexist, I love watching women’s tennis, too. In some grand slams, it’s more compelling and enjoyable than the men. But this year, with the greatest female player of all time, Serena Williams (most grand slam titles in the Open Era with 23, and just one behind Margaret Court for most all time) missing most of the schedule due to being pregnant, it’s just not as watchable.

I guess her sister, Venus, is a possible narrative to watch, at 37 years old, looking to win her sixth Wimbledon title while dealing with the stress over a car accident last month in which another vehicle slammed into her car in a Florida intersection, killing a 78-year-old man in that other car. It was originally determined Venus was at fault, but the local police amended that assessment the other day, saying the investigation shows she didn’t do anything illegal.

It’s just hard not to be enthralled with the men’s draw this year in anticipation of the greatest semifinals ever — maybe in any sport.

Federer is part of what is being billed as the “Big Four” who are the top four seeds — Federer at No. 3, Novak Djokovic at No. 2, Rafael Nadal at No. 4 and Great Britain’s very own Andy Murray as the top seed.

Three of those men are among the top four all-time in career grand slams — Federer at the top with 18 after winning the Australian this year, Nadal second with 15 after winning the French this year, and Djokovic, who is tied with Roy Emerson in fourth with 12 (two behind Pete Sampras’ 14 slams).

That has never happened before in tennis. If you want to compare it to other sports, imagine the final four teams in an NBA postseason being the current Golden State Warriors, the 1960s Boston Celtics, the 1980s Los Angeles Lakers and the 1990s Chicago Bulls — the San Antonio Spurs from 1999 to 2014 and the 2000s Lakers could be wildcards in there.

Sure, there have been some other memorable Wimbledon semifinals. In 1980 and 1981 the final four consisted of Bjorn Borg, John McEnroe and Jimmy Connors — all great players in their era, but none holding more than eight career slams. The 1982 women’s semifinals consisted of Martina Navratilova, Christ Evert-Lloyd and Billie Jean King — the latter well after her last grand slam title in 1975 and the other two well before the end of their careers in which both won 18 slams.

Even 1987 has a star-studded women’s final four with Navratilova beating Evert in the semis, then edging Steffi Graf in the final. But that was early in Graf’s career before most of her 22 slam crowns.

This year, Federer, Nadal and Djokovic are still going strong in their careers, while Murray and his three slams is right there skill-wise and this is his favorite surface.

It’s historic and everybody should pay attention this week, even if you aren’t a huge tennis fan. It may not happen again — at least until the U.S. Open later this summer in which they will likely be favored to reach the semis again.