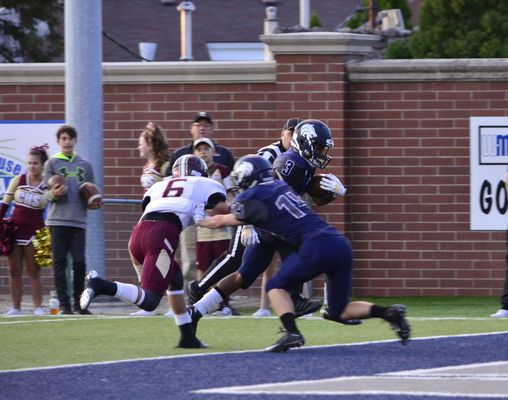 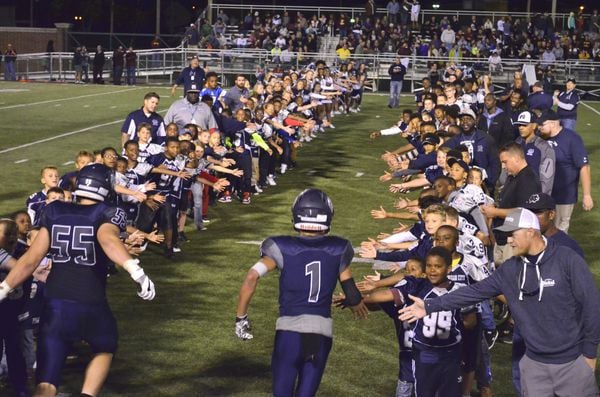 Photo by Jennifer HeathOn Pop Warner Night at Ames Field, Michigan City Pop Warner players, coaches and cheerleaders line up to give MCHS football players high fives as they head out onto the field for the second half of their game against Chesterton on Friday night.

Photo by Jennifer HeathOn Pop Warner Night at Ames Field, Michigan City Pop Warner players, coaches and cheerleaders line up to give MCHS football players high fives as they head out onto the field for the second half of their game against Chesterton on Friday night.

Don’t ever let any football fan undersell the importance of special teams.

Sure, offense and defense get the bulk of practice time during the week, whether you’re talking about high school, college or the pros. But every season there always seems to be a couple games where special teams directly affects the outcome, and it indirectly affects every game at every level of football.

In Friday’s 35-14 Michigan City victory over Chesterton at Ames Field, special teams played a major role, and it wasn’t the normal special teams aspect that people think about.

Yes, there was a missed field goal by Chesterton that would have tightened a seven-point game at the time, and there was an onside kick late recovered by the Wolves. Oh, and how about that kickoff to open the game by the Trojans’ Chris VanEekeren that went out of the endzone? You don’t see that often in high school.

But it was the punting by VanEekeren and City’s Michael McCullough Jr. — who is known more for his talent as the Wolves’ quarterback — that stood out.

How’s this for a rarity in a high school game: Both players had three punts and averaged at least 50 yards per punt. McCullough averaged 50.7 yards with a long of 55, while VanEekeren averaged 51.0 with a long of 63.

The unusual part is that they arrived at those similar averages at very different ways.

VanEekeren has a leg. Those long punts flew almost all of the distance.

McCullough’s weren’t anything to sneeze at before they landed at around 35 yards per effort. But that Ames Field turf was very kind to McCullough with the bounce and roll resulting in three consecutive Chesterton drives starting at the 1, 14 and 3 yard lines.

It was frustrating to Chesterton coach Mark Peterson, who thought it was partly his team’s fault.

“We gave up too many plays on special teams in the first half,” he said. “We let the ball bounce around; we have to make those plays against an athletic team like Michigan City.”

• H-F carry over: That blowout loss at Homewood-Flossmoor in Week 2 could be reaping benefits for the Wolves the rest of the season. But that doesn’t mean City head coach Phil Mason wanted to see a repeat on television.

“Last Saturday IMG Academy (a powerhouse prep school football team in Bradenton, Fla.) was on TV and I watched a little and thought, ‘hey, I just saw this team,’” he joked.

What’s not funny is how the Wolves bounced back from that game and will the rest of the campaign.

“When you’re beaten by a dog, you can either run with your tail between your legs or you can bite back,” he said.

• Penalty propensity: One thing Mason lamented again after Friday’s win was his team’s penalty yardage. The Wolves racked up 12 infractions for 105 yards — it would have been more if not for one 15 yarder that was half the distance to the goal line and only eight yards.

But Mason blamed himself and his staff more than his players.

“There were a couple penalties I’m still shaking my head at … but once we clean that stuff up, we’ll be even better,” he said. “I’m putting that on me. I’m not putting that on our kids. They’re playing hard. We need to clean it up as coaches.”

After the MCHS band was done. Two groups were honored — Michigan City Schools teachers and Michigan City Pop Warner football players, coaches and cheerleaders. The second group not only were introduced, but they formed a human tunnel for the City high school players to run through and get high fives when they returned to the field for the third quarter.