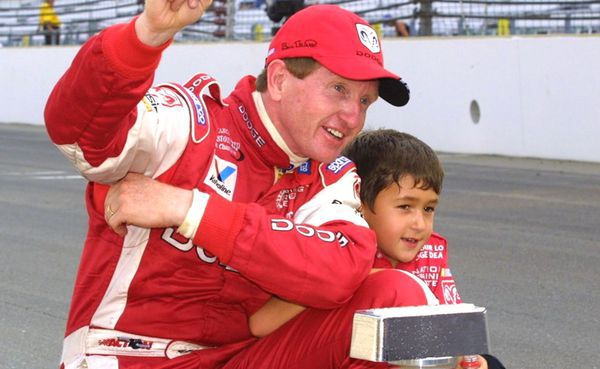 Indianapolis Motor Speedway photoBill Elliott poses with his 6-year-old son, Chase, and the Brickyard 400 trophy back in 2002 when he won the race. 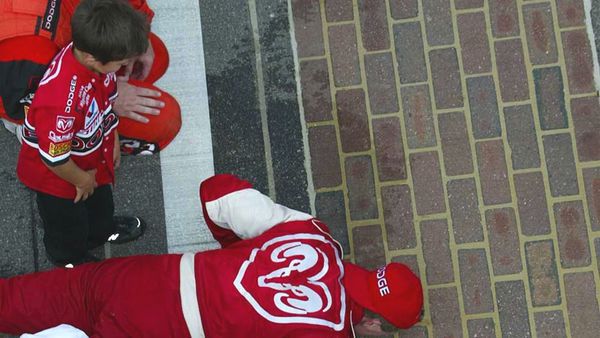 Photo from Explore The Brick pinterest siteBill Elliott kisses the bricks after winning the 2002 Brickyard 400 while his 6-year-old son (and current NASCAR driver), Chase, stands behind him contemplating whether to join in the kissing.

Indianapolis Motor Speedway photoBill Elliott poses with his 6-year-old son, Chase, and the Brickyard 400 trophy back in 2002 when he won the race.

Photo from Explore The Brick pinterest siteBill Elliott kisses the bricks after winning the 2002 Brickyard 400 while his 6-year-old son (and current NASCAR driver), Chase, stands behind him contemplating whether to join in the kissing.

It’s not nearly as iconic of a father-son photo as a small John F. Kennedy Jr. hiding under his dad’s desk in the Oval Office when JFK was President in the early 1960s, but it could be part of a feel-good NASCAR moment on Sunday when the Brickyard 400 takes place at Indianapolis Motor Speedway.

Back when Bill Elliott won the 2002 Brickyard 400, he performed the traditional “kissing of the bricks” at the historic finish line (which was started by Dale Jarrett and his crew chief Todd Parrott after Jarrett won the 1996 Brickyard 400).

When some camera angles captured Elliott and his crew willingly allowing dirt and rubber touch their lips, you could see standing Elliott's six-year-old son Chase standing behind dad. The image is being used on NBC to promote Sunday’s race coverage at the most famous speedway in the world (after all, the Indy 500 has been going on more than 100 years at the 2.5-mile track).

Chase admits he questions his younger self, wondering why he didn’t kiss the bricks with dad.

Maybe he’ll get a second chance on Sunday.

In this unusual season of young NASCAR drivers rising through the ranks of the top series, Elliott still hasn’t won a race in his two-year career in the Monster Energy Cup Series. He’s captured the pole three times — both years at the Daytona 500 — and finished runner-up three times (all at Michigan).

First-time winners this season are Ricky Stenhouse Jr., who has won twice to shake the label of “Danica Patrick’s boyfriend” and instead be labeled as a NASCAR winner, Austin Dillon, who drives the iconic No. 3 car that used to be driven by the late Dale Earnhardt, and Ryan Blaney.

Another young gun, Kyle Larson, won his second race in a young career.

So it’s time for Elliott to join the party, and the Brickyard would be perfect considering the history he’s connected to at the track. Besides his dad being one of the most well-liked drivers in NASCAR history and a Brickyard winner, Chase drives the No. 24 Hendrick Motorsports car that’s known more for it’s previous driver, Jeff Gordon.

Gordon holds the record with five Brickyard wins, including the first in 1994, and coincidentally, he will be the pace car driver on Sunday.

Want another coincidence? This is the 24th Brickyard 400. Things that make you go hmmm.

So if my pick of Chase doesn’t win, who else would be considered in the short list of favorites?

Defending Cup and two-time defending Brickyard champion Kyle Busch seems due to win a race this year. He’s accumulated plenty of points, but hasn’t broken through for a win. Last year he won both the XFinity and Cup races at IMS, so he knows and loves the track.

Jimmie Johnson also loves the Brickyard. He could match former teammate Gordon with his fifth time kissing the bricks.

If Chase Elliott is feel-good story No. 1, his Hendrick teammate Dale Earnhardt Jr. has to be a close No. 2. Junior announced that he’s retiring after this season, and it would be nice for him to get a win within the next month and a half to get into the playoffs (coincidentally called “The Chase”).

Junior’s dad also won the Brickyard in 1995, so why not end his career with kissing the bricks.

• For those of you watching the race for the first time, here’s some tidbits for you.

It’s not a great spectator race on television. The pomp and circumstance of the facility outweighs the race itself because there has rarely been a close finish. The expansive track just doesn’t lend itself to photo finishes for stock cars, unlike the open-wheel cars in the Indy 500 with plenty of barn-burners in that race.

It’s actually much better to see the Brickyard 400 in person, like Jim Saylor of Michigan City and Terri Shinn of La Porte will be on Sunday. Since crashes and passes can happen almost anywhere at the huge track, most of the seat locations are good. In fact, being in one of the turns is probably better than being at the finish line because of the lack of close finishes.

Then again, there’s a first time for everything and maybe Elliott and Earnhardt Jr. can combine for a neck-and-neck battle at the end.