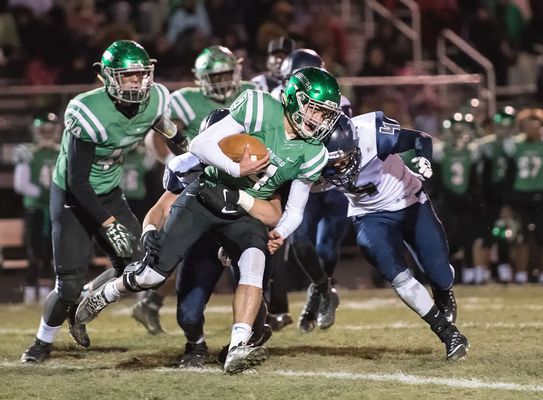 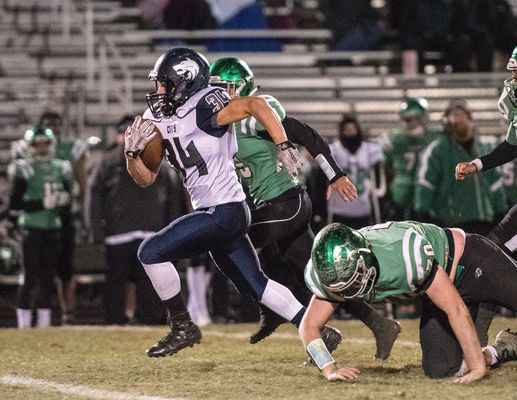 Photo by Robb QuinnMichigan City's Daelon Wren breaks through the line for a big run in the Wolves' 21-7 regional victory at Concord on Friday night.

Photo by Robb QuinnMichigan City's Daelon Wren breaks through the line for a big run in the Wolves' 21-7 regional victory at Concord on Friday night.

Driving into the News-Dispatch office on Saturday, I saw something that I’m betting isn’t as common as in other communities.

On Chicago Street, just east of the Indiana State Prison parking lot, there were about 10 kids playing football. On November 11. In 33-degree temperatures.

I’m betting the cold air didn’t bother them because they have Michigan City football fever.

Let’s revisit a statement from one of my columns a year ago when City football was gaining steam and in contention for the Duneland Conference title.

This has never been a football town. Basketball? Oh yeah, big time. Volleyball? Off and on over the years, that sport’s been pretty popular, too. TR Harlan has Wolves’ volleyball on the right track.

But football has been an afterthought. Ames Field rarely fills to capacity. I’ve covered La Porte-City games there in the past that didn’t fill the stands. The two county rivalry games there last year and this season (the sectional championship 10 days ago) were packed.

Too bad Friday’s game wasn’t at Ames. It would have been a frenzy.

Too bad this week’s historic semistate game isn’t at Ames. Instead, it’s at Kokomo (7 p.m., Central time, on Friday) and I hope fans will head south down U.S. 31 in droves to pack Cross Field down there (hey, Kokomo has a nice Waffle House, so you can pack that place, too, and get some loaded hash browns).

I know one person who would go if she could.

“I’m 88 years old and I’ve been waiting a long time for this, just like the Cubs,” said Dorothy Glancy, who has been a Michigan City resident almost her entire life. “Those boys are playing great.”

That’s an understatement. Maybe someone who knows Glancy can buy her a ticket and take her to Kokomo since she would be a great inspiration to the players and coaches.

The turnaround is simply amazing. And it’s not just about Phil Mason.

The Wolves have had good head coaches with more history in the city and county. Bob Holmes, Ken Bye, and Mike Karpinski, whose dad, Bill, coached at both Rogers and Elston back in the day, were all good coaches. Craig Buzea was a very good coach who came from Portage, so he didn’t have a history in Michigan City. But he was a Duneland Conference guy who knew the challenge of succeeding at City, a basketball school through and through.

(Remember that non-conference game in Week 2 at Buzea's current school, Homewood-Flossmoor? H-F lost in the second round of the Illinois postseason while City is still playing. Just saying.)

What those coaches didn’t have was the perfect combination of talent and an all-star staff.

The familiarity between Mason and his defensive coordinator, Roydon Richards, goes way back — to 1995 to be exact. Coincidentally, that’s the year Rogers and Elston consolidated into Michigan City High School.

Before Mason notched his first head coaching job at Hammond Clark, he was an assistant under Richards when the latter was in his second year as head coach at East Chicago Central.

Back then, Mason was the defensive mind. Now things have come full circle with Richards being the defensive guru — based on the last two games, he definitely deserves guru status — and Mason running a high-powered offense.

The location of this week’s semistate is also comes full circle since Mason’s first game as Richards’ assistant in 1995 was at Kokomo. For their sake, hopefully the result is better since that was a 36-21 loss by E.C. Central. In fact, they also lost to Kokomo at home the next year.

If you’re not a football fan in Michigan City, you might want to jump on the bandwagon while there’s still room. Besides the logical goals of winning more games and bringing home titles — by the way City athletic director Craig Shaman, you better order that new football banner for the gymnasium since there never was a need for one before now — one of Mason’s original goals was to build a program with staying power.

Last year he started with 45 players on the freshman team, and those guys will be juniors next year ready to continue a new winning tradition.

It’s just a matter of those kids being part of a defending regional champ or defending semistate champ.

Or you can dare to dream about Thanksgiving weekend jubilation. I’m sure managing editor Adam Parkhouse — a Michigan City High School graduate — and City golf coach Drew White, who was part of the first MCHS graduating class, also dream about that possibility.

But they’re also both Cubs fans, like Glancy, and know it’s one step at a time.