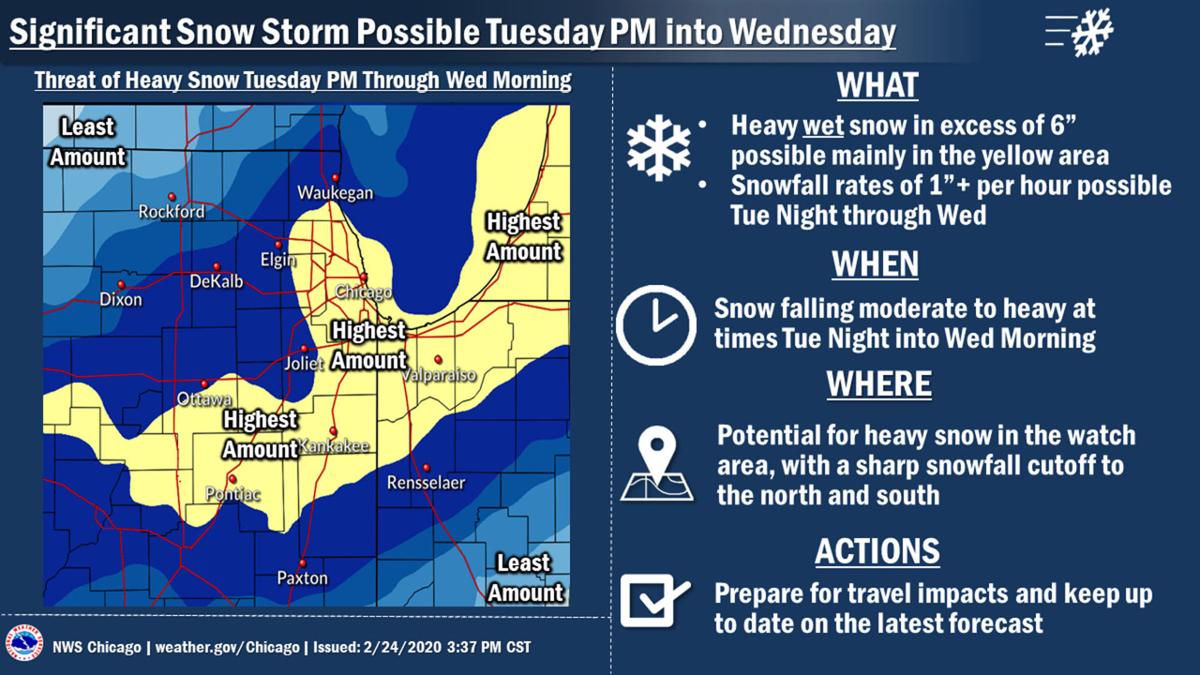 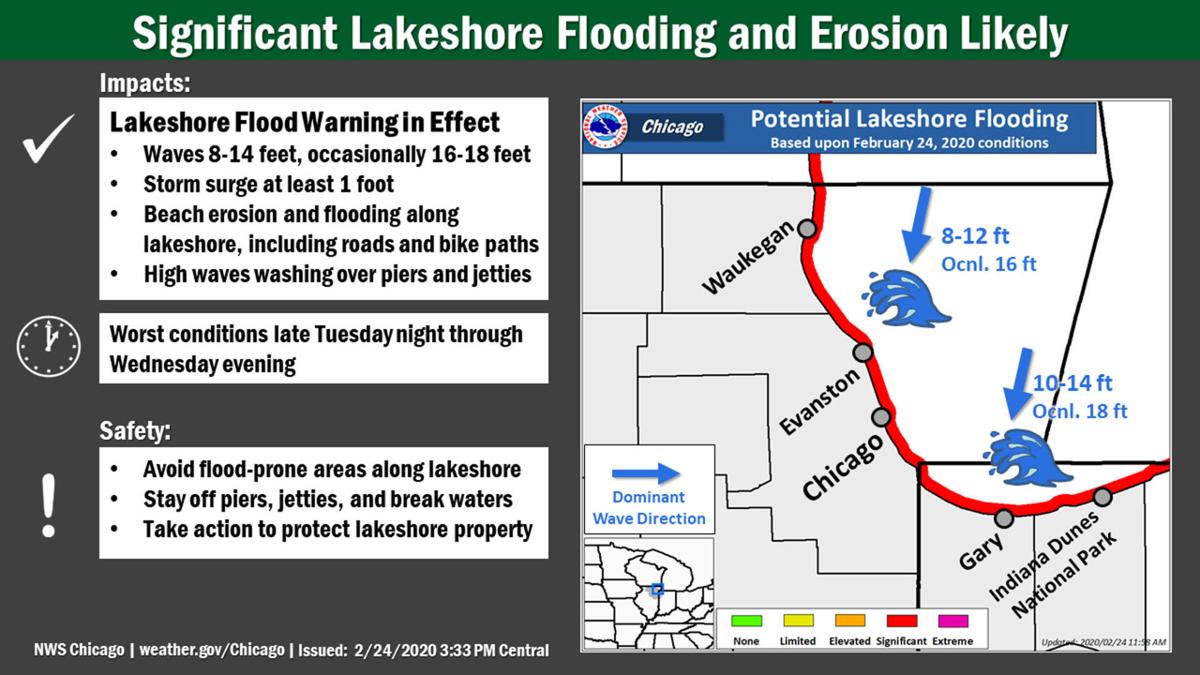 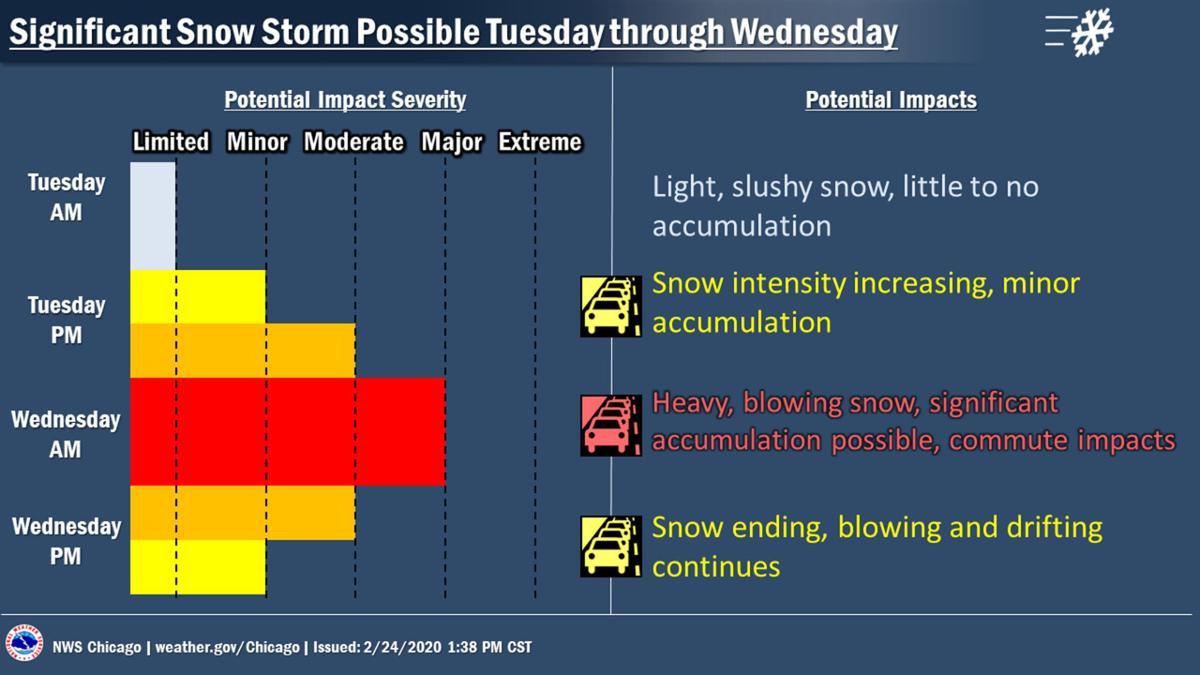 MICHIGAN CITY — After a weekend in the 50s that seemed to be a harbinger of spring, Northwest Indiana could be hit with its biggest blast of winter this week.

A major winter storm which was originally forecast to track well north of the region has been shifting southward, according to computer models.

And the latest indication is the largest snowfall of the year is expected to hit the area, with La Porte and Porter counties expected to get 6 inches – and some models suggesting as much as a foot.

The National Weather Service has issued a Winter Storm Watch to be in effect from northern Illinois through northern Indiana and Southwest Michigan from 6 p.m. Tuesday evening through 11 p.m. Wednesday.

It calls for snow accumulations in excess of 6 inches that will make travel “very difficult,” especially for the Wednesday morning and evening commutes.

The lakeshore is also expected to to take another beating from the storm, with a Lakeshore Flood Warning in effect for 6 a.m. Wednesday through noon Thursday, according to the Weather Service.

“Severe beach erosion and lakeshore flooding will develop,” the Weather Service said in the advisory. “Strong northwest to north winds, along with record high Lake Michigan water levels, will create strong wave action along the coast.”

Waves are expected to average 8-12 feet over that period.

Precipitation will begin as rain overnight Monday and into Tuesday morning, gradually shifting over to all snow Tuesday night into Wednesday, according to the Weather Service.

“Confidence in exact snowfall amounts is low at this time but significant accumulations are possible across Northwest Indiana and southwest Michigan” before quiet weather returns by the end of the week, according to the NWS Northern forecast discussion.

Wednesday could be a particularly difficult travel day.

“The potential for moderate snow Wednesday morning accompanied with gusty winds coming after accumulating snow through the overnight Tuesday is certainly there,” NWS said.

“That will likely lead to travel issues during the Wednesday morning commute, especially for Chicago and into Northwest Indiana. Whether or not blowing snow becomes an issue is somewhat challenging to say. Northerly winds will gust 30-35 mph and snow composition will dry out but much of the snow that will have fallen will be of the wetter type.”

Wednesday could also see a storm surge of 1-1.5 feet on Lake Michigan, which will “exasperate impacts from the waves,” NWS said.

And while wind direction could mitigate some of the impacts to the shoreline, “significant impacts are expected.”

The official forecast as of Monday afternoon called for rain Tuesday, mixing with snow and becoming all snow after 10 p.m. – 1 to 3 inches is possible overnight.

Snow could be heavy at times on Wednesday with a high near 33, and accumulation of 4 to 8 inches possible before ending overnight.