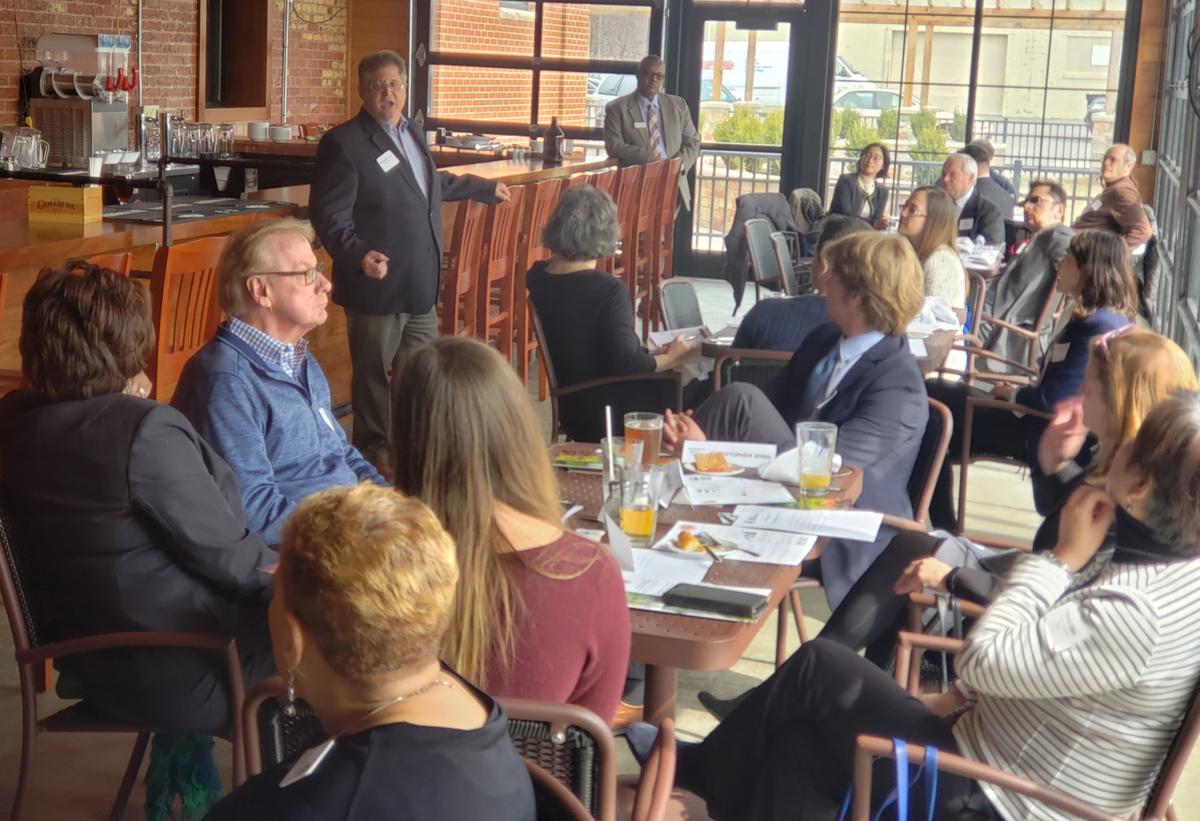 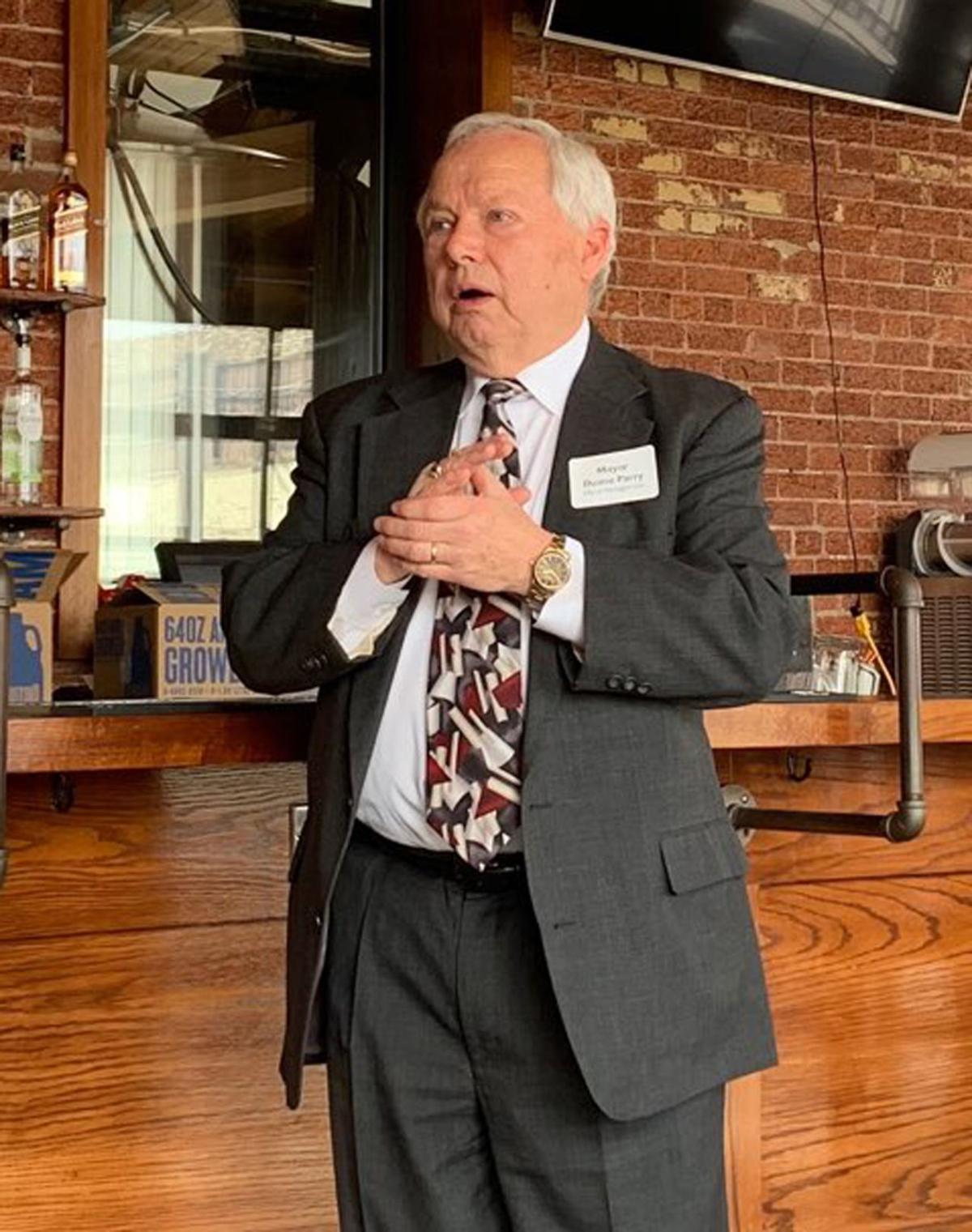 Mayor Duane Parry speaks to foreign trade representatives at Shoreline. Parry said he hoped they will “establish themselves here, benefit from our workforce and all the other wonderful things we have here in Northwest Indiana ...” 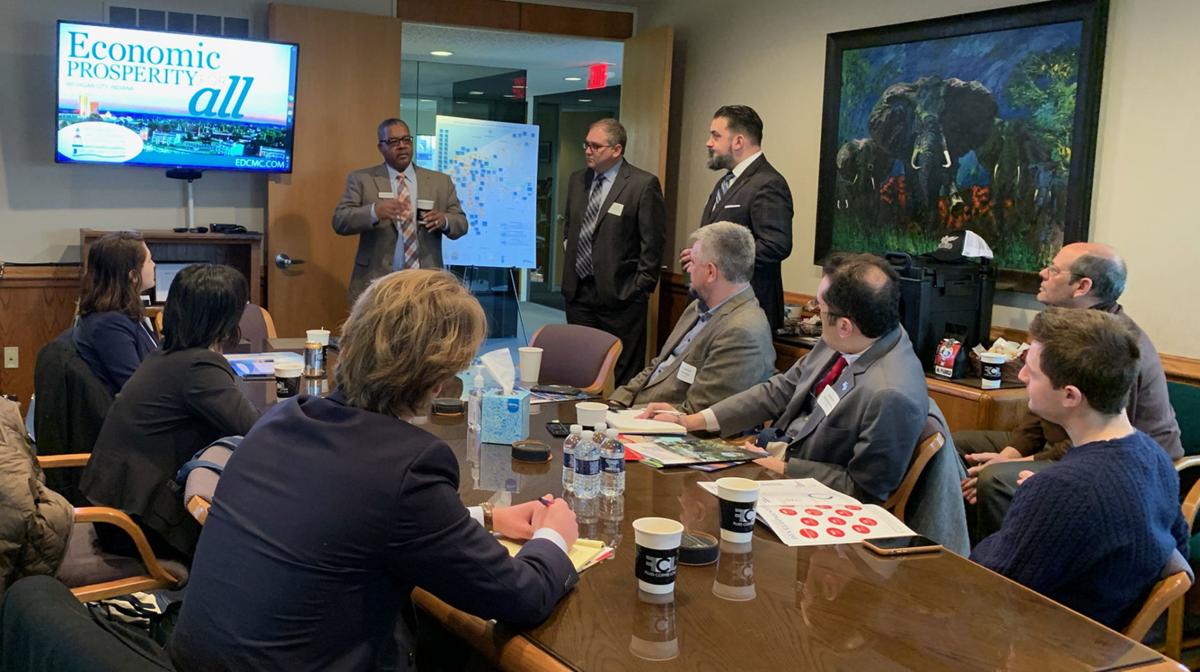 Clarence Hulse, executive director of the Economic Development Corporation Michigan City, speaks to trade reps at the EDCMC office before their tour of Michigan City. “Michigan City is a fantastic community,” he said. “We’re the hub of commerce, and we’re trying to make sure the world knows what’s going on in Michigan City.”

Mayor Duane Parry speaks to foreign trade representatives at Shoreline. Parry said he hoped they will “establish themselves here, benefit from our workforce and all the other wonderful things we have here in Northwest Indiana ...”

Clarence Hulse, executive director of the Economic Development Corporation Michigan City, speaks to trade reps at the EDCMC office before their tour of Michigan City. “Michigan City is a fantastic community,” he said. “We’re the hub of commerce, and we’re trying to make sure the world knows what’s going on in Michigan City.”

MICHIGAN CITY — Trade representatives from eight countries toured Michigan City last week to get a firsthand feel for the community and to gather information.

“We’re excited to have trade representatives from eight countries in Michigan City learning about us firsthand,” said Clarence Hulse, executive director at EDCMC. “Michigan City is a fantastic community. We’re the hub of commerce, and we’re trying to make sure the world knows what’s going on in Michigan City.”

The trade reps who attended Thursday’s tour stopped first at the EDCMC office for a short presentation. Then they embarked on a bus tour down Michigan Boulevard, U.S. 20, Franklin Street and Washington Park to showcase the city’s tourism and manufacturing backgrounds, and the general quality of life.

The group took a brief tour at Marbach and learned about the German manufacturer’s process in setting up shop in Michigan City last year. They also got a look at Sullair, the city’s police and fire services, investment opportunities at the Marquette Mall site, some recently annexed land, industrial and business parks, and the Uptown Arts District.

“The goal is for them to go back and plant that seed with the folks within their countries,” Hulse said, “so they’ll come to Michigan City to visit and also to come and invest in our community, whether by buying a house or bringing a new business to Michigan City.

“So, for me, this is planting the seeds for long-term growth and also developing cultural relationships.”

After the tour, Rocio Rivera, from the economic department at the Mexican Consulate in Chicago, said, “I was very impressed with the city, with the companies that are investing here, with the structure that you have, the real estate development and the local business.”

Yaninne Vega of Business France North America said, “A really nice place to live and do business, Michigan City. I was really surprised about the air compressor hub being here. I didn’t know about it and I will totally explore that.

“A lot of different opportunities … that you have. I already knew about the Crossroads of America being Indiana … but it was good to see it.”

Michigan City was the fifth community visit for Vidmantas Verbickas of the Consulate General of Lithuania in Chicago.

“Every time, I’ve learned something about development; diversification; how counties, cities, councils are coping with economic challenges,” he said, “which are opportunities for investment, for doing business, and in which area businesses are clustering.

“We have, from Lithuania, interest in United States for exports as well as attracting foreign direct investment. And also, we have Lithuanian businesses coming to the United States. So, for me to know where and who I can suggest, it’s a big deal.”

Select Chicago is a nonprofit economic organization that works with 30 different municipalities within about 186 miles of O’Hare Airport to foster economic development in economically-challenged communities, according to organization president Michael Edgar.

“Over the last five years, we’ve built up a really good bench of communities and foreign trade commissioners to create a real dynamic for bringing people here and taking people there,” Edgar said.

Select Chicago and CITCA offer community tours on the second Thursday of each month, allowing trade representatives to get an up-close look at each of Select Chicago’s community partners.

According to Jenilee Haynes Peterson, economic development manager at EDCMC, Michigan City is the only community in Indiana to have partnered with Select Chicago, providing a major advantage for local investment opportunities.

“We’re casting our future here; we’re making new friends,” he said. “Michigan City is, as we all know, a diverse community. We have a very impressive industrial heritage, and I have a heavy industrial background.”

But it’s light industry that Parry said he most hopes to attract.

“My philosophy is, Michigan City needs a balanced economy,” he said. “The tourism that we have; the retail that we have; our wonderful businesses, such as the Blue Chip Casino, Hotel & Spa. But we need a light industrial base for the people who either do not want to work in the industries I mentioned, or cannot.

“And this is what I hope to introduce our new friends to. Many of them have never been here before; they do not know the history of Northwest Indiana,” Parry said.

“We are a blue-collar area of America. We are the heartland of America. And we embrace the industry that they’ve enjoyed for years. We hope that they will establish themselves here, benefit from our workforce and all the other wonderful things we have here in Northwest Indiana – low cost of living, our labor force and our international port.”