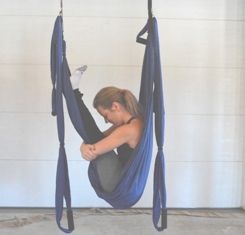 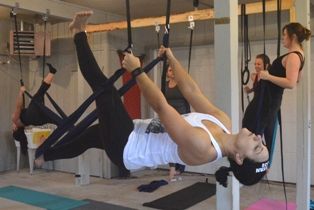 When Deauke Robbens and her husband were forced to relocate from their home in Belgium, it was either northwest Indiana or China.

Robbens, impulsive and adventurous, said she was rooting for the small city La Porte.

When looking for a in house in the small town, the big red barns they continually saw on the country roads drew their interest.

“Looking for houses wasn’t easy because styles are different and I didn’t find anything cozy,” Robbens said. “It was just the two of us here. We are leaving everything behind: Our friends, family, our cozy home in Belgium. So I wanted to feel really, really at home here right from the start.”

They finally got lucky, she said.

“We bought the house for the barn because it was so beautiful,” she said. “While we were looking for a house we thought, ‘Wouldn’t it be great to live in a red barn?’”

They decided on the house located at 1612 W. 400 S. And while it may look ordinary from the outside, behind it sits an anything-but-ordinary barn.

The two story red barn with a look-out steeple on top. Outside the barn are two horses – who were flown over from Belgium named Luke and Spietje.

Inside is a work-out room unlike most found at the local gym. Hanging from rafters are swings designed for aerial yoga; mats line the floor to help with traction for High-Intensity Training movements and other blankets and props accompany the music needed to release into relaxing positions.

Robbens knew when she came to the U.S. she would never be excited for a 9-to-5 job in an office situation.

She spent the first few months of her new life here pondering the questions “’What do I want to do? Who am I?” She began working out at the La Porte YMCA, becoming certified in exercise programs, and working on fixing the horse pasture at her house.

Suddenly, she had everything needed for her dream job: Mind, body and nature.

In the summer of 2015, the barn became the home to three programs within her new business Barn Sante.

The first class she offers is called HIT the Barn, a 28-minute session focusing on keeping the heart-rate up while moving.

The second class is called Bodyflow, a 30- or 45-minute combination of yoga, pilates and tai chi.

The final program offered is the most recent added to the schedule. Go Aerial, is the aerial yoga workout, brought to Robbens by April Kelly, a former Jazzercise instructor who found her calling in aerial yoga, without really knowing that she was looking for it, she said.

“I saw the workshop offered and said, ‘Ahh, this is what I want to do!’” Kelly said. “I was impulsive and just wanted to do the workshop. Afterward, I didn’t know what to do. I thought, ‘Did I just spend almost $1,000 to teach this class in my garage?’”

Through a friend of a friend, the women found each other; one in search of someone and something to help expand her business, and the other in search of a space.

“April told me about the aerial yoga, and I had a good vibe from the start,” Robbens said. “I asked, ‘Am I ready for this?I just started my business? But then this aerial yoga is unique, and I needed to grab this opportunity!”

The class turnout has ranged from one or two people to six, which is the maximum. The HIT program allows for 10 people and the Bodyflow only allows two.

“When it’s just one or two people, there is more quality time and personal coaching,” Robbens said. “That’s why this place is different, this is not a gym. I don’t want to create that type of atmosphere. I want small and welcoming.”

On Saturday, the studio was full and included one of the regulars, Mandi Westlund, who said she has been to all three classes since the business opened.

“Aerial or Bodyflow are my favorites,” she said. “It is relaxing after the work week and it is just relaxing to come here and have fun with the other girls.”

The workouts incorporate the body and the mind aspects of Robbens’ three-word mantra.

For the nature aspect, she created workshops to learn how to use nature, in the form of her horses, for health.

In the first workshop she offered a few weeks ago, Robbens led a group of women into a half-day of walking, meditating, reading poetry and learning how to just be with the animals.

“In Belgium, I wanted to do something with horses and people, but not really just learning to ride,” Robbens said.

For years, Robbens said, her horses would react similar to how she was feeling.

“I read this book, about the horse is the mirror of your soul, and I actually believe that because when I am insecure or not in a good state of mind and I go to my horse then he is also in a bad mood,” she explained. “So when I am just there, not expecting the horse to do anything, then the horse will get better and friendlier too, and I thought, ‘Wouldn’t this be great to share with other people?’”

The workshop with the horses, and the workouts inside the barn, have been amazing, according to feedback Robbens has received and the attendance of regulars.

“One woman told me this is her happy place,” Robbens said smiling. “If I can make this a happy place for other people, I would be so proud.”

Come and go as needed

Robbens offers the classes throughout the week and on Saturdays. People are encouraged to sign-up at least three hours before of the beginning of class to secure a spot.

She does not offer memberships, but rather invites people to come and go when they need it, and believes the non-membership routine is more intimate and friendly.

Since starting the classes, Robbens has accumulated her regulars and many new friends throughout the area. She hopes to expand and continue growing the business, introducing children, more men and adding more classes to the schedule.

“I had in mind a vision for the future, because I want to make a difference in La Porte,” she said, “and make a contribution to help the community in anything and everything that is body, mind and nature related.”

More information on the workshops and classes can be found on the Barn Sante website at www.barnsante.com and on their Facebook page.