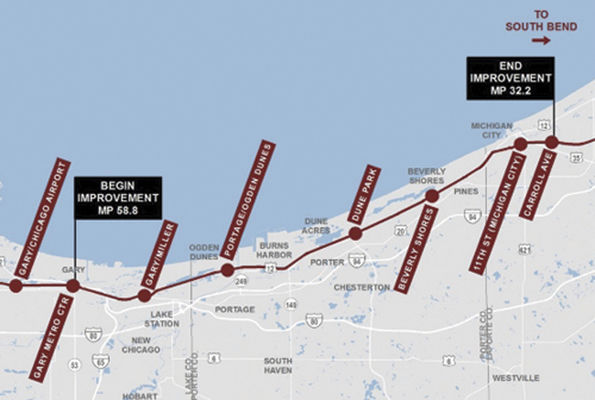 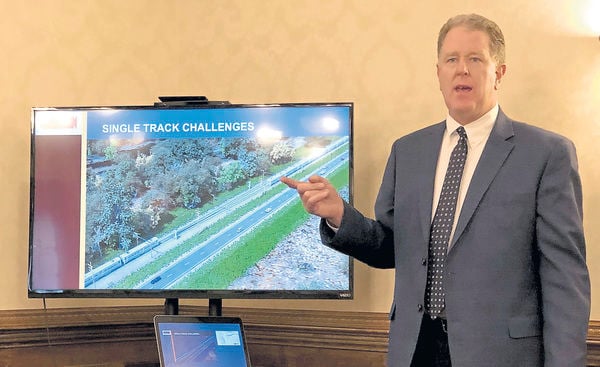 Photo by Ted YoakumNorthern Indiana Commuter Transportation District President Michael Noland shows a photo of the single South Shore Line track between Gary and Michigan City during his presentation to the Rotary Club of La Porte. He said the ambitious Double Track project will improve train service to and from Chicago – and bolster the Northwest Indiana economy. 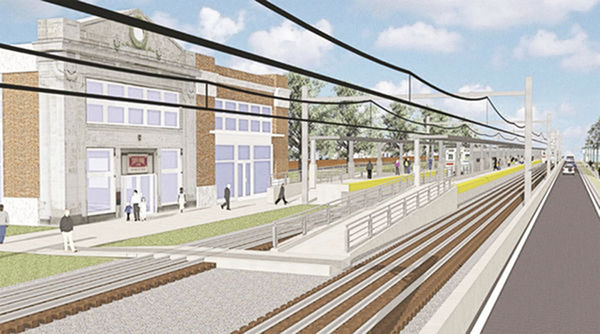 Photo by Ted YoakumNorthern Indiana Commuter Transportation District President Michael Noland shows a photo of the single South Shore Line track between Gary and Michigan City during his presentation to the Rotary Club of La Porte. He said the ambitious Double Track project will improve train service to and from Chicago – and bolster the Northwest Indiana economy.

La PORTE — After decades of dreaming, planning and dealing, the South Shore Line’s $300 million Double Track project is on the cusp of becoming reality.

With it will come massive economic development and higher wages for not just communities adjacent to the commuter rail line, like Michigan City, but those throughout the region.

Those are the conditions Northern Indiana Commuter Transportation District President Michael Noland forecast during a presentation to the Rotary Club of La Porte.

Noland, who oversees operations of the South Shore, discussed the current state of the long-awaited Double Track project, and how it will benefit both the rail service and region as a whole.

The proposed initiative – a partnership between NICTD and local, state and federal entities – will make vast improvements to the line, which runs from downtown Chicago to South Bend.

Chief among the enhancements is the installation of a second mainline track from Virginia Street in Gary to Michigan Boulevard in Michigan City. Though the service runs two-way traffic across the line, there is about a 25-mile stretch between the two cities where trains run across one line, which can cause severe delays.

“If you have any kind of an issue where one train is late, then every train gets put back,” Noland said.

With the installation of double-tracking, NICTD officials anticipate service to speed up immensely, Noland said.

Michigan City residents using the service to commute to Chicago presently can expect a 90-minute commute. That travel time is on top of the 15 minutes or more they need to get to one of the city’s two stations, as well as approximately 15 minutes to get from the Chicago station to their workplace, he said.

“That’s over four hours of commute time a day,” he said. “It’s not for the faint of heart.”

With double-tracking in place, travel time should drop down to about an hour.

The project also calls for four new bridges and overhauls to five existing stations, including the 11th Street stop in Michigan City.

One of the improvements slated for the downtown station includes installation of high-level boarding platforms, which allow passengers to walk right onto the train instead of walking up a narrow staircases from the street. Not only is this scheme easier to navigate, but should also dramatically decrease the time it takes trains to load and unload passengers, Noland said.

In line with NICTD’s goal of improving safety along the line, officials also have major overhauls in mind for the current layout of the track inside the city.

Plans call for the closure of 20 grade crossings inside city limits, with the remaining 14 receiving fully-automated gates, lights and bells, Noland said.

“If I were king of the world, I would close all grade crossings – cars and trains need to be separated,” he said. “But for right now, I’ll take the improvement.”

More significantly, the district will remove the nearly 2 miles of embedded, in-road railroad on 11th Street, replacing it with a dedicated line separated from car traffic with a barrier. Meanwhile, NICTD plans to fully acquire the right-of-way on the south side of 10th Street, further isolating the tracks from street traffic, Noland said.

To fulfill these lofty ambitions for Michigan City, NICTD is looking to use federal funds to acquire 62 local homes through eminent domain.

“That’s never an easy thing to do, and I tell people you don’t do it lightly,” he said. “You should only do it if the reason is for something that's for the greater good, some kind of transformational project that is going to benefit an overwhelming number of people. That’s why we’re doing it.”

Those benefits include a drastic rise in ridership on the South Shore. NICTD officials expect to double its current annual passenger count of 12,000 over the next 20 years, Noland said.

The project is also expected to raise the region’s economic fortunes.

Officials forecast $668 million worth of private sector investment over the next 20 years in Michigan City alone after the double track is in place. They also project the creation of 429 local jobs during that same period, with a total of 1,000 in the next 30 years.

The improvements to the South Shore’s speed and reliability will also make it more viable for young professionals to choose to remain in La Porte County and commute to Chicago.

“We need to retain talent and attract talent,” he said. “We need to make it easy to give people the opportunity to earn a living in Chicago and then come back here and live in Northwest Indiana. That’s what we really want to open up.”

NICTD would like to spread the increased prosperity to communities just outside the South Shore service area, as well.

The district recently established a “feeder” bus system in Valparaiso, which allows residents to ride a bus to the nearby Dune Park station. Once the double track is in place, Noland hopes the district can take advantage of the higher ridership to implement a similar bus network in La Porte, ferrying passengers to the Michigan City station.

To make these boons come to reality, though, NICTD will require around $300 million in funding.

Over the past several years, the district has received funds from the four counties it services – including La Porte, which is pledging $18.25 million, with Michigan City chipping in the lion’s share of $12.2 million. The state of Indiana is also investing heavily in the project, with NICTD counting on the Federal Transit Administration to provide the remaining dollars.

Although NICTD officials estimate the project to cost $300 million, the FTA requires a mandatory 33 percent contingency cost, bringing the price up to around $420 million.

NICTD hopes to hear from the FTA within the next four to six weeks as to whether the agency has approved the project to enter the engineering phase, which virtually guarantees it will receive federal funding, Noland said.

If all goes as anticipated, the district will begin construction in 2021, setting a target date of completion in March 2024.

While a lot of work remains ahead of them, Noland is optimistic about the project, and the potential it can have on Northwest Indiana.

“We know that if we leverage this correctly – if we reduce the travel time, increase ridership – we’re going to be successful,” Noland said.