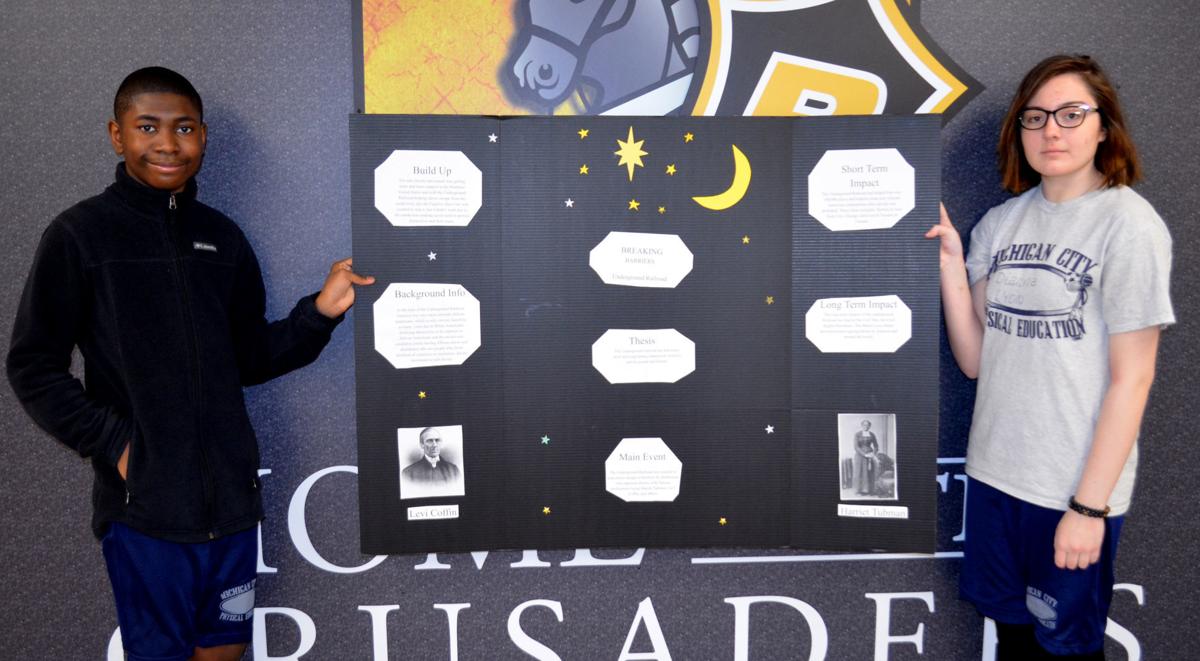 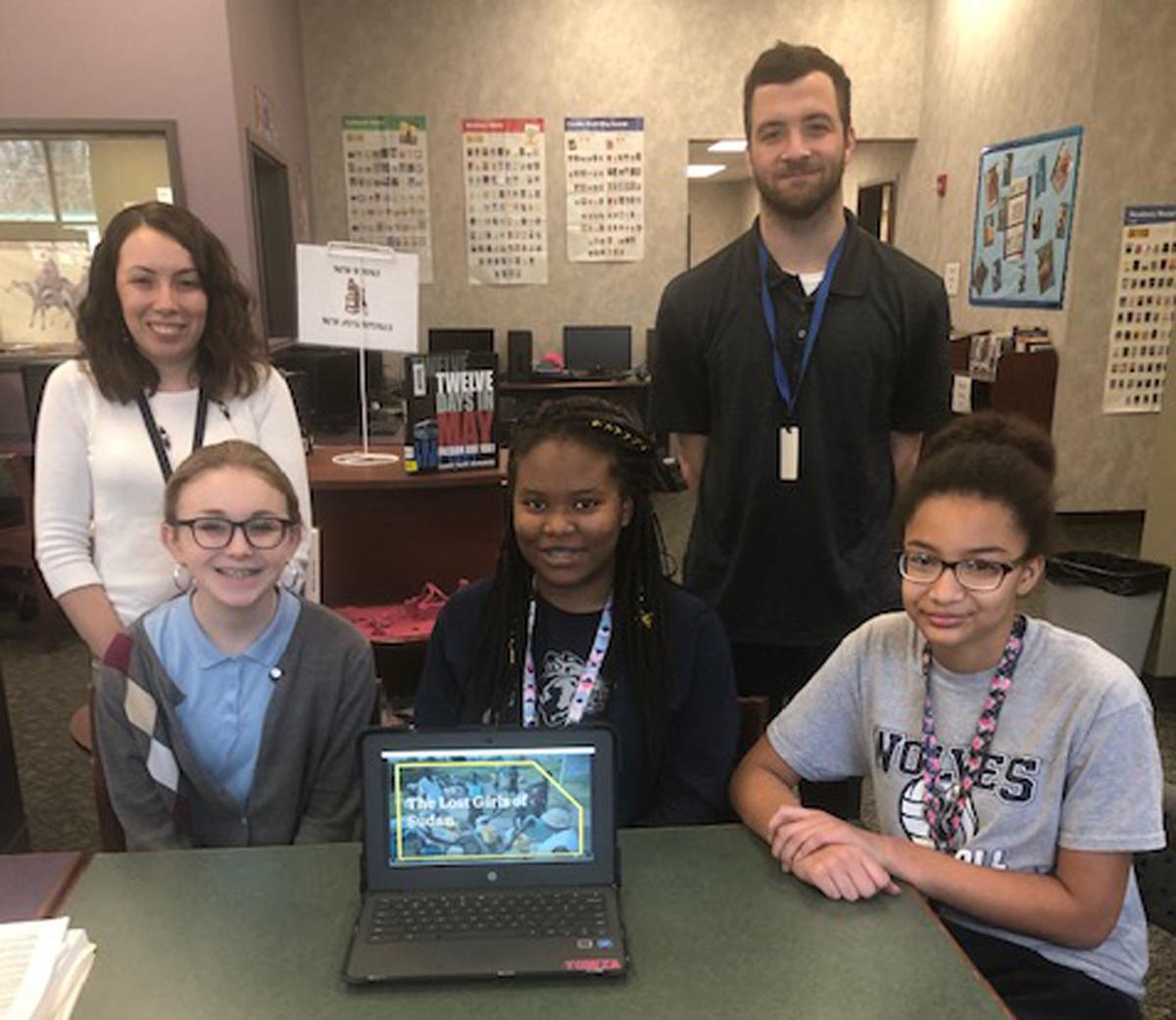 Barker Middle School teachers Mariah Pol and Michael Eldridge stand behind seventh-graders, from left, Bailey Chavis, Brielle Jones and Hannah Parker whose documentary, “The Lost Girls of Sudan” was among the entries in the school’s history fair. 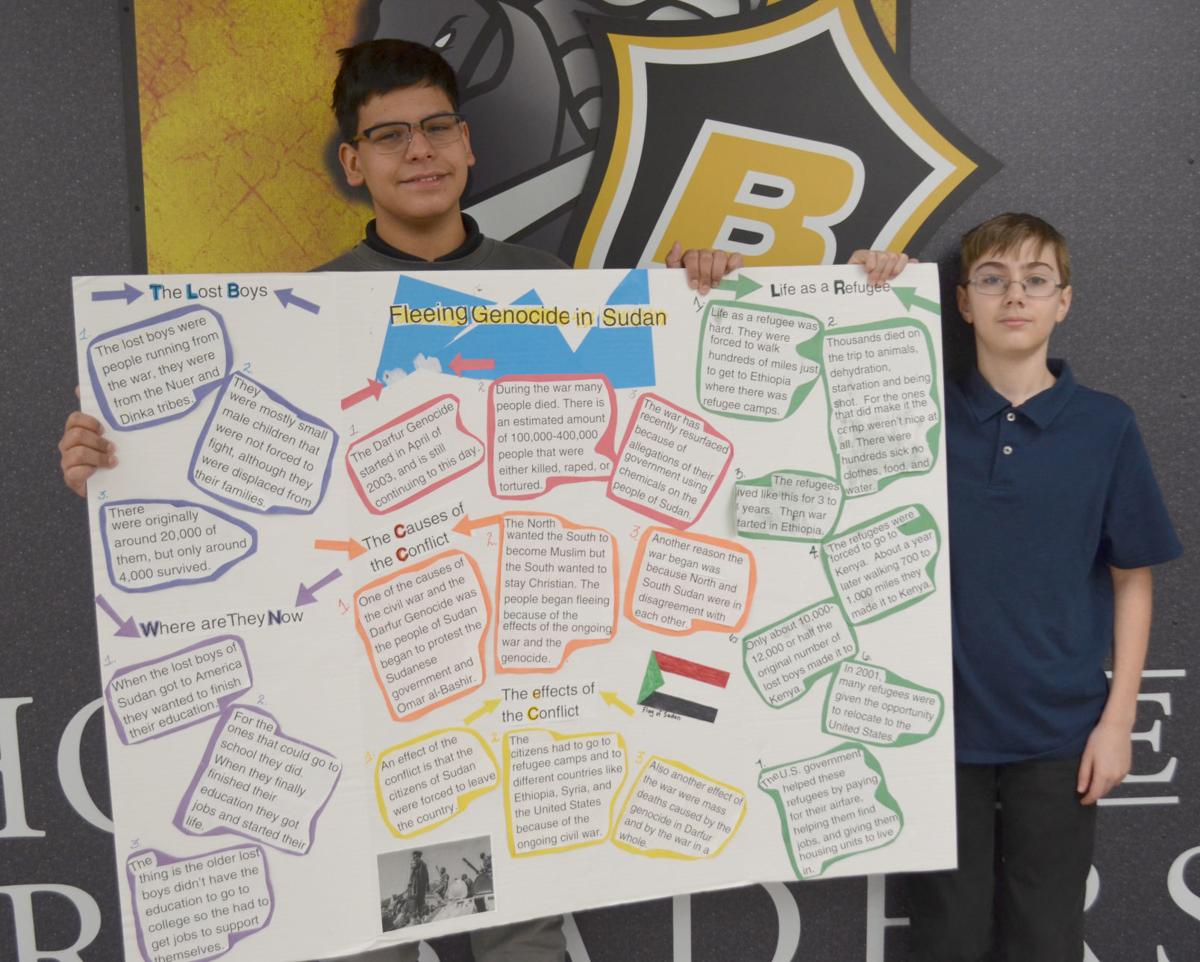 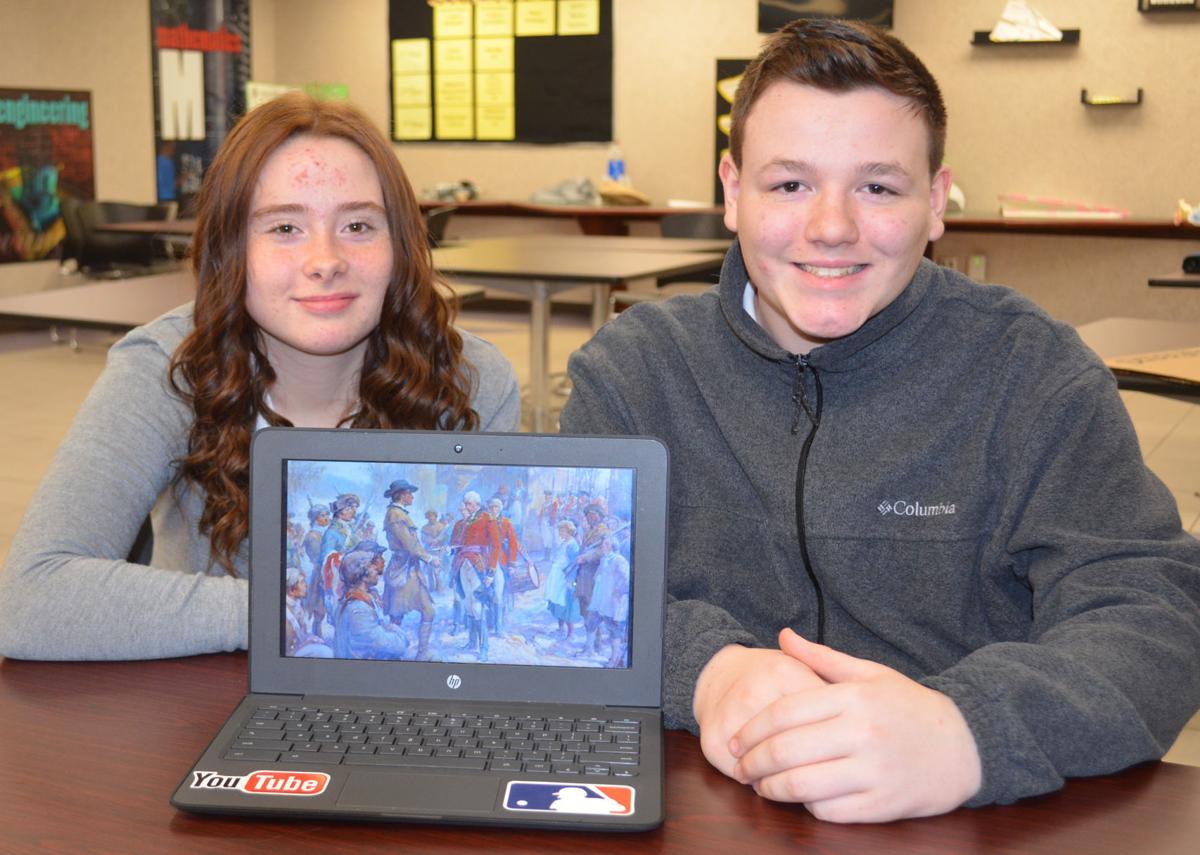 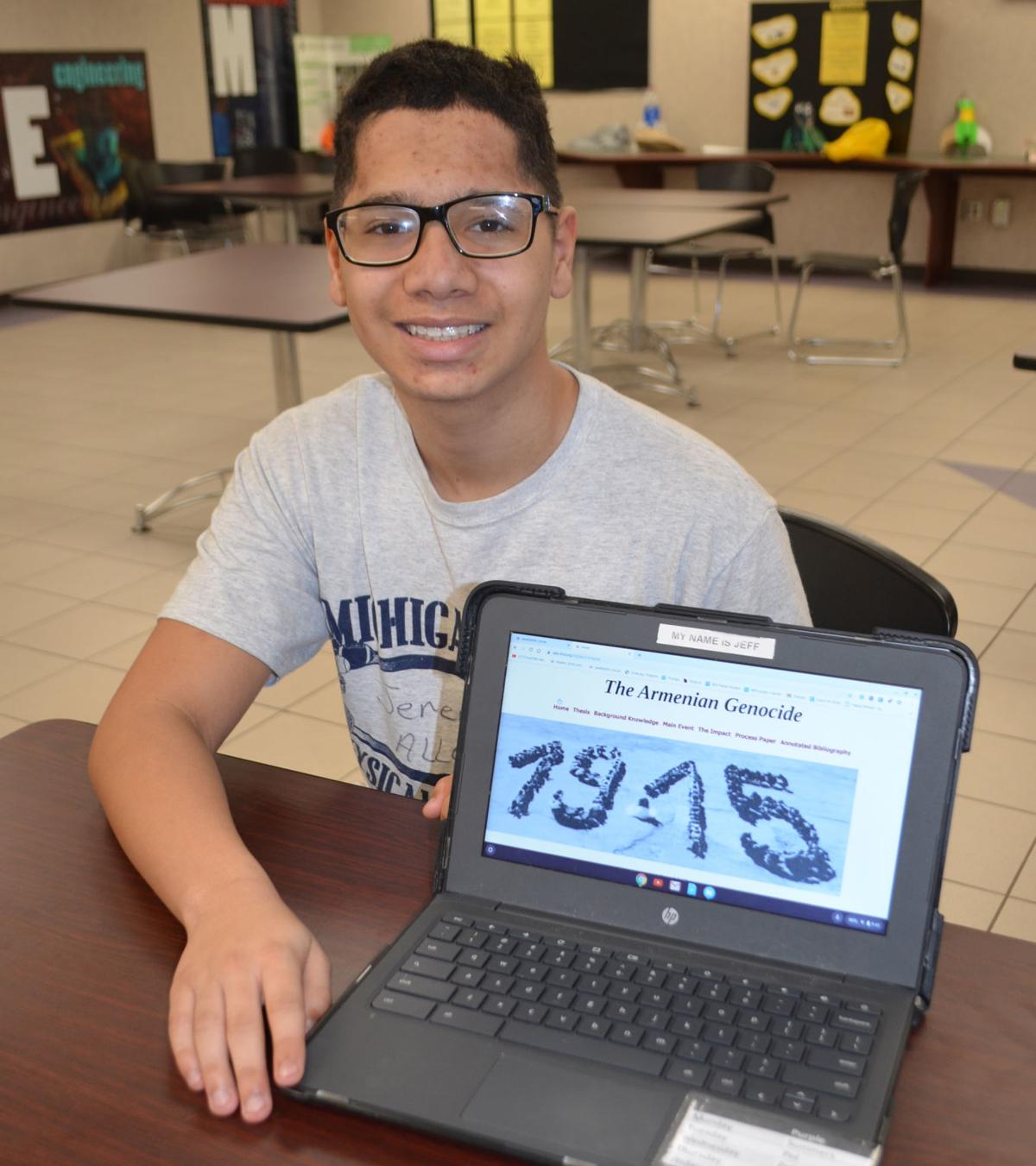 Eighth-grader Jeremiah Allen created a website on “The Armenian Genocide” for his social studies project. 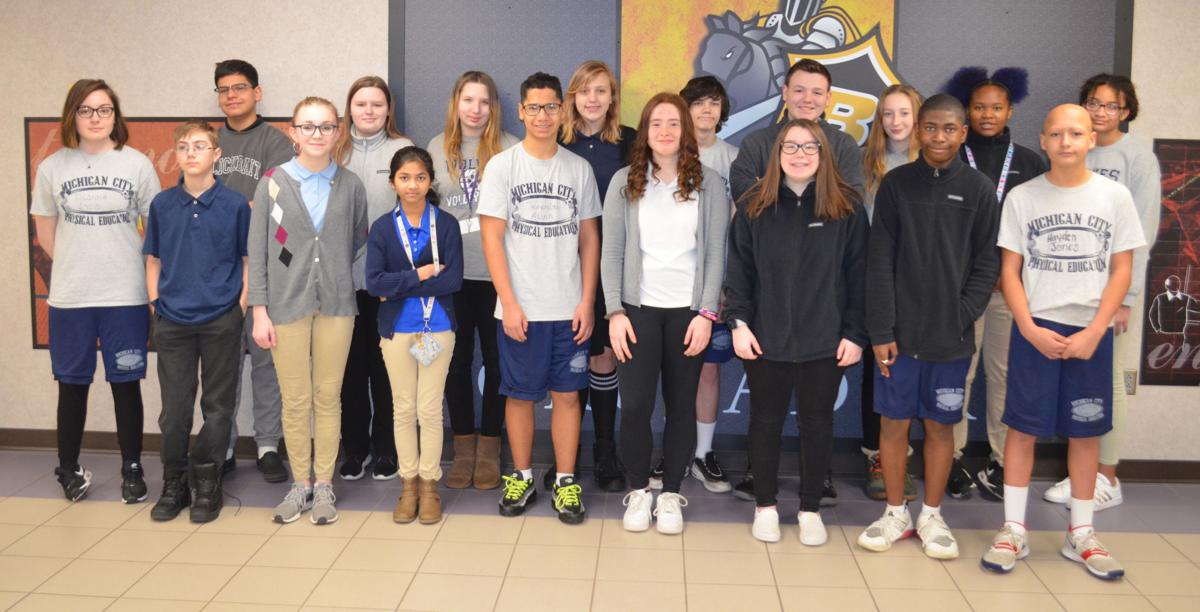 Barker Middle School teachers Mariah Pol and Michael Eldridge stand behind seventh-graders, from left, Bailey Chavis, Brielle Jones and Hannah Parker whose documentary, “The Lost Girls of Sudan” was among the entries in the school’s history fair.

Eighth-grader Jeremiah Allen created a website on “The Armenian Genocide” for his social studies project.

This year the school is sending 18 groups of seventh- and eight-graders to the National History Day Northwest Regional Competition on Feb. 22 at John Young Middle School in Mishawaka.

Although the school sent close to that number last year, the assignment that earned this distinction is still fairly new at the school.

Mariah Pol, who teaches social studies was “trying to think of creative things to do” a few years back when she attended an educational conference.

After hearing the history fair idea, she first incorporated it into a “Historical Explorers” after-school club for seventh- and eighth-graders, then gradually wove it into the regular classroom curriculum for the past three years.

Seventh-grade social studies teacher Michael Eldridge, who is new this year at Barker, also assigned his students the project this year.

They could choose from five formats for their project: an exhibit board containing 500 words, a website with no more than 1,200 words, a documentary or performance 5-10 minutes in length, or a research paper of 1,500-2,500 student-composed words.

The kids could also choose their own partners and were given about two months to complete the project – both in and out of the classroom.

Nearly 300 paired up into 117 groups. Many chose a poster as they are familiar with that format from science fair projects, but several chose the more challenging formats. A few even performed short skits.

“The project connected a novel that the students were reading in their English Language Arts classes,” Eldridge said.

His seventh-grade students read “A Long Walk to Water,” based on a Sudanese lost boy. Pol’s seventh-graders were assigned “Amal Unbound” – the story of a young girl in Pakistan; and her eighth-graders read “Refugee,” a book about characters in Nazi Germany, 1990s Cuba, and modern Syria.

“I love how the project gives students choice,” Pol said. “They were able to choose within that country what topic interested them the most and then decide how to present based on their own skill set.”

The students presented projects in the school library and answered interview questions they had prepared for. Twenty-five teams were chosen to proceed to the regional history fair, and 18 committed to participate.

“We learned about how the life was of a refugee or a lost boy – the point of view of someone fleeing from the genocide in Sudan,” Munoz said.

“We picked this topic because it was interesting and fairly recent – in the 2000s – and the kids going through this were about our age.”

“We learned about the lifestyle changes they had to make to survive as they walked from one refugee camp to another,” Darschewski said. “We learned about where they are now since the war ended.”

“I learned that he had played a big role in the Revolutionary War,” Monger said.

“We wanted to do something harder so it would give us a better chance of getting in (the regionals),” Westphal said. “It also had some Illinois and Indiana history to it.”

“They really want to win the $1,000 college scholarship awarded for an entry on Indiana history,” Pol said.

Westphal pointed out that Clark had several siblings, including youngest brother, William, who co-led the Lewis and Clark Expedition. Monger said several schools in Indiana are named after George Rogers Clark.

“I wanted to learn more about the Underground Railroad because it’s important to my family’s history,” Scully said.

“I learned more about how the Underground Railroad functioned and how other abolitionists, including Levi Coffin whose section was in Indiana, were involved.”

They also learned that they also went to Canada – “They just didn’t stay in the United States,” Lyon said.

Lyon and another student, Jeremiah Allen, were partners last year and advanced to state competition. Their history project was a website about the Samurai arsenal, as the theme was Japan.

This year Allen, who has an aptitude for technology, is advancing to the regional level again with another website titled “The Armenian Genocide.”

“It was a learning curve for us because the website builder we are supposed to use changed this year,” Pol said.

“I learned that their genocide was the first documented by the United State government, and that Turkey and Armenia used to be together forming the Ottoman Empire,” Allen said.

“We thought it would be the most challenging of all the options. It was, too – it actually took a long time. I have a lot of respect for people who edit films because it is not as easy as it looked,” Chavis said.

Interview excerpts of some of the Lost Girls were included in addition to recordings of the three Barker students speaking.

“We explained the war, what happened to these girls, and the difference in the media coverage between the girls and the boys,” Chavis said. “I found it very amazing how few girls actually made it to America compared to the boys.”

Parker agreed: “I learned how forgotten they were and how the girls had many more issues compared to the boys such as being forced into marriage, stolen from their families, and abused.

“It was hard to put everything together and hard emotionally to talk about the girls’ issues because of all they had to go through.”

She said her group chose a documentary because, “We wanted to do something different and it was a great way to explain how we felt about the issue and to use our different tones of voice to show the seriousness of the issue.”

Pol said all the projects required many English language arts skills, including how to properly cite their sources in a MLA (modern language association) format.

“It taught them a lot of skills that will help them in high school and in college,” Pol said. “They learned perspectives, the impact of cause and effect, and short-term and long-term on their event, how to evaluate differences, and, of course, time management.”