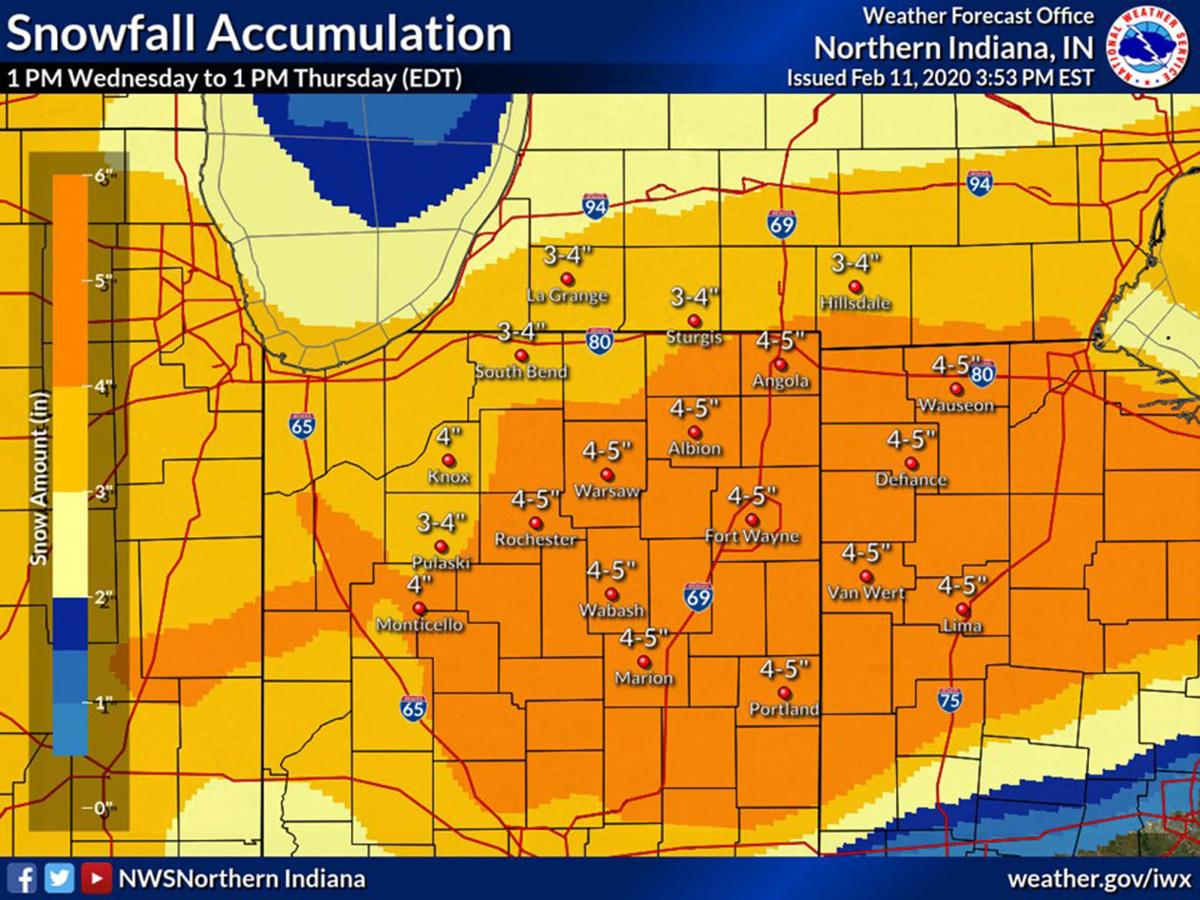 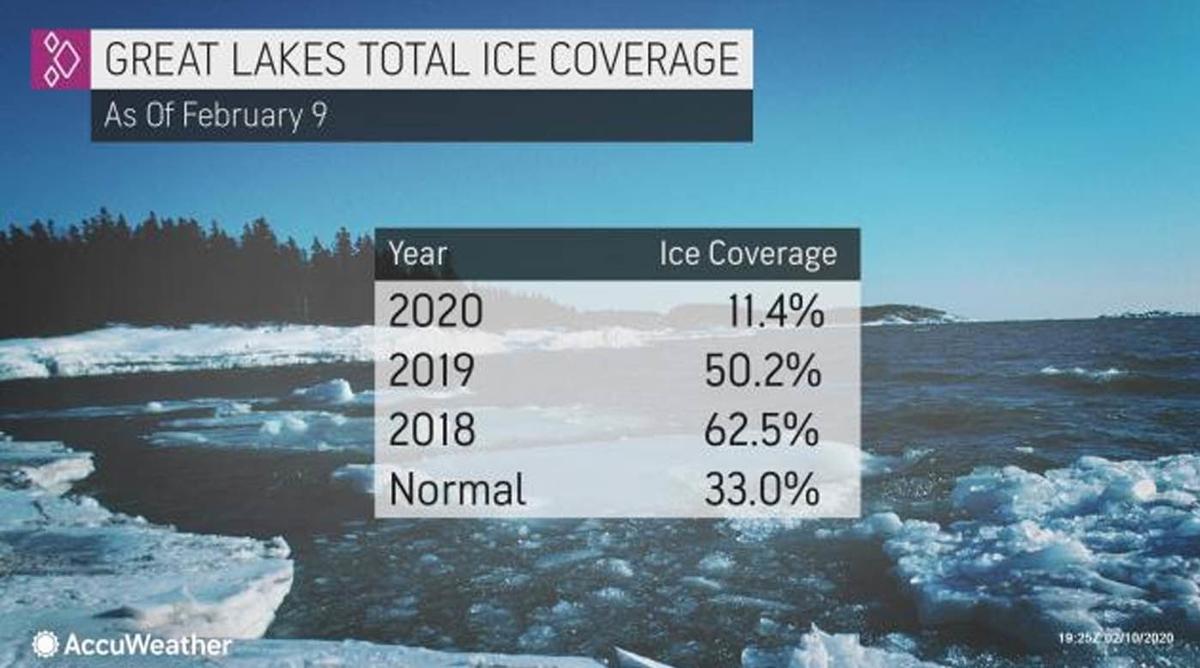 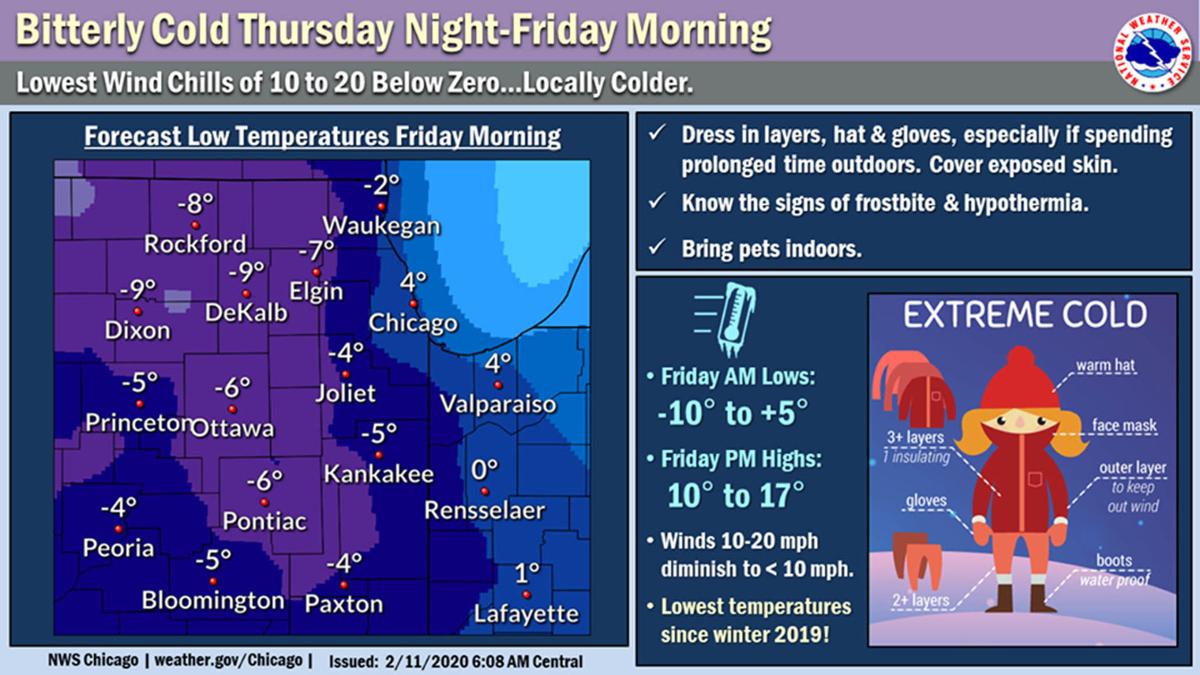 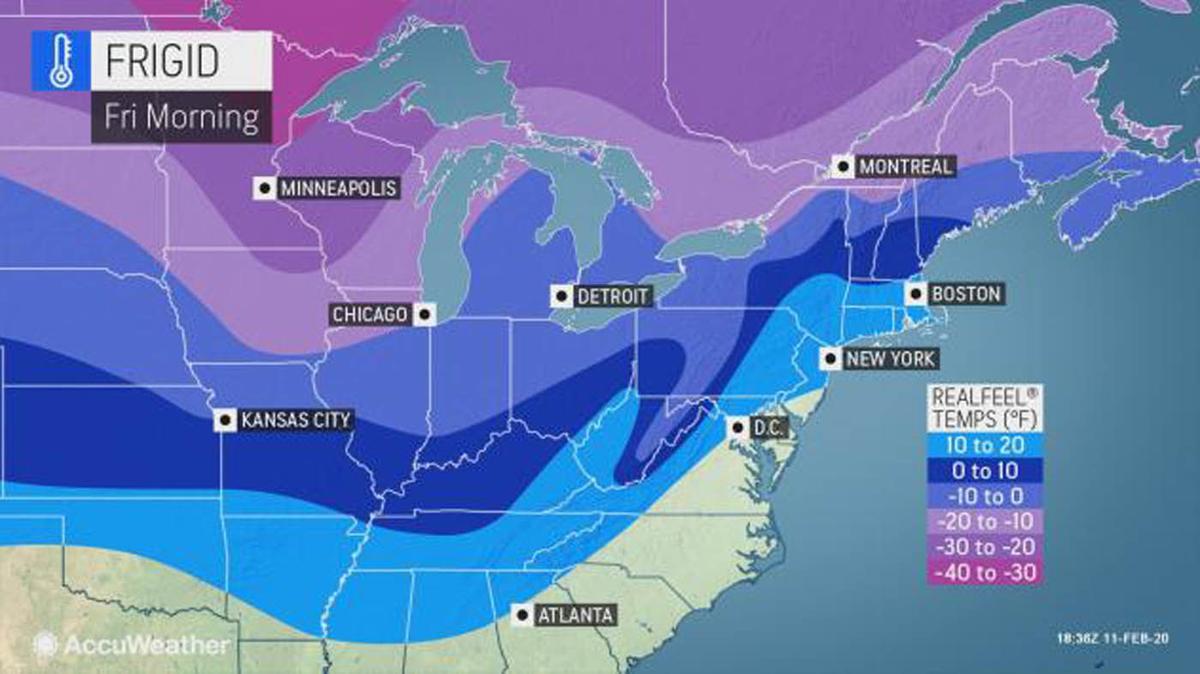 MICHIGAN CITY — Following a winter storm expected to bring 4-6 inches of snow to Northwest Indiana, a powerful Arctic front will surge south from Canada, bringing the coldest air of the season.

“So far this winter, Plains, Midwest and Great Lakes residents have been able to save a few dollars on heating costs thanks to mild weather, but the heaters will be working overtime later this week,” according to AccuWeather senior meteorologist Alex Sosnowski.

And as the cold air mass surges southward, it will join forces with a separate storm system Wednesday night in the Midwest, helping to inject a fresh shot of cold air on the back side.

The combination of atmospheric disturbances is expected to bring accumulating snow to places like Chicago, Northwest Indiana, Detroit and Cleveland, Sosnowski said.

As snow continues to fall Thursday morning, school closures and travel delays are possible, he said.

The Weather Service is calling for 3-5 inches of snow across the area, with another 1-2 inches of lake-effect snow possible after the main storm passes.

“As the forecast stands right snow, storm total snow of 3 to 5 inches is possible across the area,” NWS said in its forecast discussion. “Confidence on pinpointing locations of higher amounts due to banding is low this far out.”

Lake-effect showers are possible over the course of the day on Thursday, with models showing a persistent band into Friday producing around 1-2 inches of snow, according to NWS.

“For now, Lake and Porter counties are favored for highest overall accumulations through as they appear best in line for lake enhancement Thursday evening, with minor additional snow Thursday night,” NWS said.

“Typically by this time of the season there has been enough cold air to freeze over a larger portion of the Great Lakes, restricting the amount of lake-effect snow that is possible,” he said.

“The lack of shelf ice this year is at least partially attributed to the lack of long-duration cold over the region this winter,” Sosnowski said.

Temperatures have ranged from 6-9 degrees above normal from Chicago to Boston since the start of 2020, during what is typically the coldest and snowiest part of the year.

As the snow storm tapers off, the bitter cold will encompass the region later Thursday, and Chicago and Northwest Indiana will likely feel the coldest air of the season so far, Sosnowski said.

“For many areas around the Midwest and Northeast, this air mass will surpass the lowest temperatures of the winter so far by an average of 5-15 degrees, even though the mainly unfrozen waters of the Great Lakes will modify the air slightly,” he said.

“Another result of the Arctic air mass setting up shop across the area Thursday into Friday will be single-digit low temperatures Friday morning and negative wind chill values,” NWS said.

“With the entire area likely to have at least some snow cover, there is a very good and increasing chance that many locations will have their first sub-zero reading of the winter on Friday morning.”

The Arctic air starts to make an exit Friday night into Saturday morning as a clipper system sweeps across the western Great Lakes.

The mild winter is also causing concern for gardeners.

“The mild conditions have created soft bud conditions – a blast of severe cold like that anticipated late this week can kill some of the buds and lead to damage in vineyards and orchards,” Sosnowski said.

The Lake Michigan shoreline could also take another battering, with strong and gusty northwesterly winds developing Thursday and persisting into Thursday evening, with a gradual slackening overnight.

This could build waves into the 8- to 11-foot range, with occasionally higher to 14 feet or so, primarily along the Porter County shore, according to NWS.

“This increased wave action across an already vulnerable region due to ongoing shoreline erosion may result in additional impacts, most notably Thursday afternoon through the evening hours.”

The official Weather Service forecast – as of late Tuesday afternoon – calls for rain and light snow likely after noon Wednesday, becoming all snow in the evening, with a high near 35.

An inch or less of snow is expected through the day and evening, but snow picks up Wednesday night with a low of 27, a 90 percent chance of precipitation and 2-4 inches possible.

Thursday will begin with an 80 percent chance of snow early and lake-effect snow later into Thursday night. The high will be near 31 before temps start to drop, with a low near zero Friday morning.

The President’s Day holiday will see a chance of rain and snow with a high near 43.