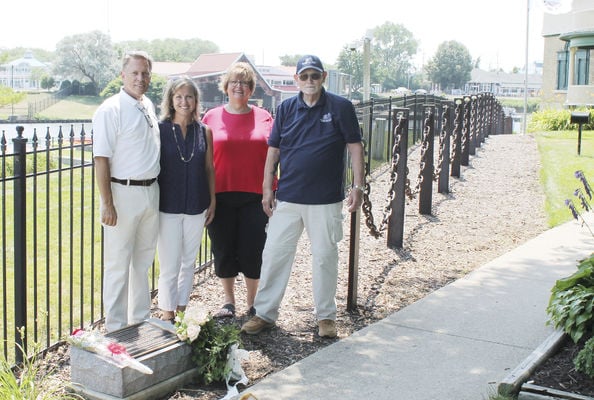 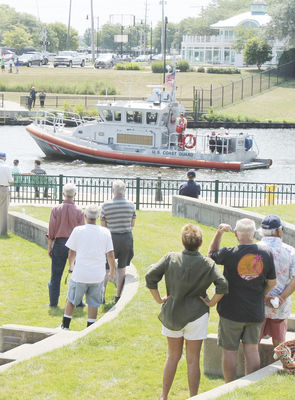 Onlookers watch as the Coast Guard lays a wreath in memory of the 844 people who died 104 years ago during the Eastland disaster in Trail Creek. 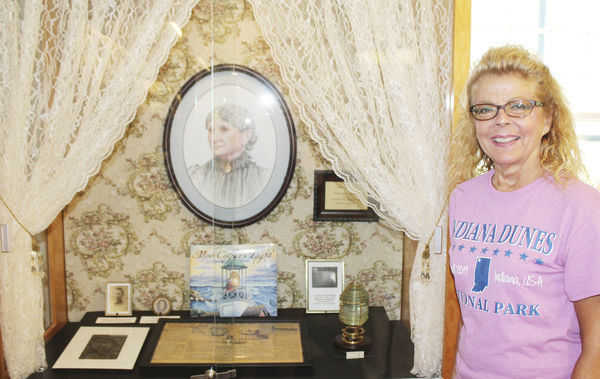 Wendy Wilcox Kerman stands next to her painting of longtime Michigan City lightkeeper Harriet Colfax during a public unveiling of her work Saturday at the Michigan City Old Lighthouse Museum.

Onlookers watch as the Coast Guard lays a wreath in memory of the 844 people who died 104 years ago during the Eastland disaster in Trail Creek.

Wendy Wilcox Kerman stands next to her painting of longtime Michigan City lightkeeper Harriet Colfax during a public unveiling of her work Saturday at the Michigan City Old Lighthouse Museum.

MICHIGAN CITY – It’s been 104 years since the SS Eastland capsized on the Chicago River, but the Michigan City Historical Society continues to remember the event each year during a special ceremony in Millennium Plaza outside the Old Lighthouse Museum.

The ship was filled with 2,501 men, women and children who were headed to Washington Park in Michigan City for the fifth annual company picnic for Western Electric Co. of Chicago on July 24, 1915.

Of those passengers, 844 died that day; and it remains the largest loss of life on the Great Lakes to date.

“It’s important that we don’t lose sight of the disaster happening,” said Jim Retseck, president of the Michigan City Historical Society. “It’s not something that you want to do, but we have to do it.”

This year, two descendants of survivors of the shipwreck attended the local remembrance to share their stories.

Valerie Bower of Westmont, Illinois, told the story of how her great-grandparents and four of their six children were aboard the ship when it turned over on its port side.

Her great-grandmother and two of her great-uncles, ages 19 and 23, didn’t make it. However, Bower’s great-grandfather – who had been a sailor in Norway before moving to the U.S. – managed to save his daughter – Bower’s grandmother, who was pregnant at the time with Bower’s mother.

“So, he not only saved my mother, but also myself and my six siblings,” she said.

Barbara Decker Wachholz, who cofounded the Eastland Disaster Historical Society with her sister in 1998, told the crowd her grandmother’s survival story.

Wachholz’s grandmother was 13-years-old when the SS Eastland rolled over, and she became trapped inside a compartment between decks for several hours. In that particular area of the ship, Wachholz said, the water never rose above the passengers’ heads; and her grandmother was able to tread water and hang onto debris to keep herself afloat until she could be rescued.

“If my nana had not survived, we would not be here,” Barbara Wachholz said. “My father would not have been here. My sister and I, and Ted’s and my two children would not be here. It really is very significant to think that fate could have turned just like that, and things could have just been so different.”

Her husband, Ted Wachholz, is the executive director of the Eastland Disaster Historical Society, which was created in 1998 to preserve the memory of the incident.

“We realized that it was so obscure,” he said. “Even in the streets of Chicago, people just didn’t know anything about it. There were 844 souls whose lives were all cut short … and none of them ever had the opportunity to live their legacy. So, we felt that if we didn’t do something, it could fade into oblivion.”

Wachholz read off a list of all the ways in which Michigan City is a significant piece of the SS Eastland’s history, and he commended the city’s permanent memorial to the event, which stands outside the Old Lighthouse Museum.

The memorial is a 2,650-pound anchor chain made up on 844 links, each one representing a passenger that lost his or her life when the ship capsized.

At either end is a plaque commemorating the event; and flowers were laid at each on Saturday, as is done every year during the ceremony.

The U.S. Coast Guard also escorted Johnny Stimley and Sandy Nelson along Trail Creek to allow them to place the annual memorial wreath bearing the words “Remembering the 844” in the water near Millennium Park, the site at which the SS Eastland would have docked had it fulfilled its voyage to Michigan City.

Immediately after the memorial Saturday, attendees relocated to a room inside the Old Lighthouse Museum, where a new color portrait of Harriet Colfax was unveiled. It hangs inside a glass case across from the one that showcases the Eastland Disaster.

Colfax, Michigan City's best-known lightkeeper, lived inside the old lighthouse from 1861 until 1904.

Local artist Wendy Wilcox Kerman was commissioned to paint the only known color portrait of Colfax based on a restored sketch. One of the attendees noted Kerman added a slight smile to Colfax's face, softening the subject's image.

The artist said she carefully considered her materials and style, wanting to keep them true to the time in which Colfax lived. She also researched her subject thoroughly before putting paintbrush to canvas.

"By knowing about Harriet, I was able to do more than a factual rendering of her wonderful face," Kerman writes in a letter framed outside her painting's case. "As I got to know more about her and to connect with who she was, I portrayed that in my portrait. Hopefully, I painted a window into Harriet's soul for viewers and exhibited some of her noble character traits."