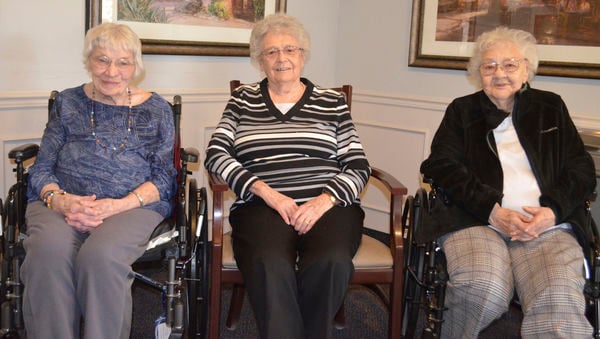 Photo by Kim NowatzkeFriends, from left, 93-year-old Jane (Cheney) Stachowski, 92-year-old Leona (Heisman) Schlaak, and 91-year old Alice (Schwermer) Kroening met as neighbors on the West Side more than eight decades ago and remain close while living together at Rittenhouse Village of Michigan City. 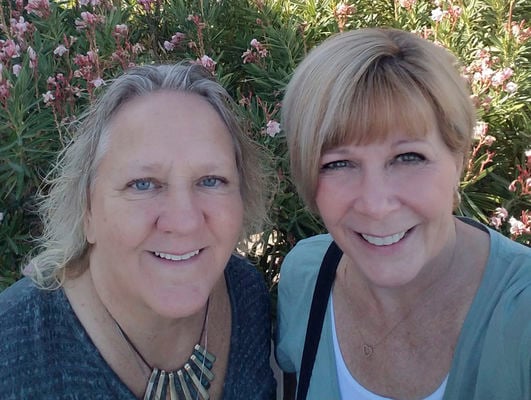 Photo by Kim NowatzkeJan (Schlaak) Skierkowski, daughter of Leona; and Kim (Kroening) BaRoss, daughter of Alice, have became friends for life because of their mothers’ close bond. 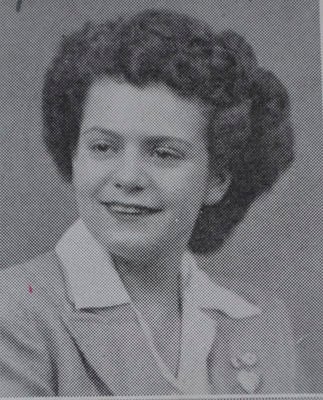 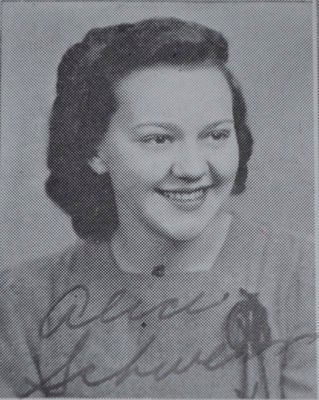 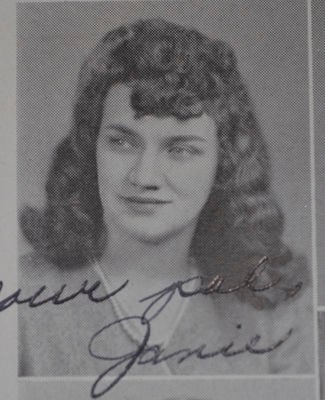 Photo by Kim NowatzkeFriends, from left, 93-year-old Jane (Cheney) Stachowski, 92-year-old Leona (Heisman) Schlaak, and 91-year old Alice (Schwermer) Kroening met as neighbors on the West Side more than eight decades ago and remain close while living together at Rittenhouse Village of Michigan City.

Photo by Kim NowatzkeJan (Schlaak) Skierkowski, daughter of Leona; and Kim (Kroening) BaRoss, daughter of Alice, have became friends for life because of their mothers’ close bond.

And they now live as “neighbors” again – thankful for their shared home at Rittenhouse, where they often meet in the dining room for meals.

They first met because of the proximity of their childhood homes. Alice lived on West 6th Street, Jane on Willard Avenue, and Leona on the corner of 4th and 6th. They attended the former Park Elementary, where Leona and Jane were in the same grade and Alice a year behind. But because of the ways grades were arranged, they graduated together in 1946 from Elston High School.

They reminisce about old times and playing traditional childhood games such as hide-and-seek, hopscotch, and double Dutch jump rope. Referencing another favorite, crack the whip, Leona said, “I have the scars to prove I was the last one.”

She also remembered forgetting to change from her “good school clothes” into her “play clothes” when she played hide-and-seek. Hiding in a neighbor’s garage, Leona accidentally sat in an oil spot that stained her skirt. Her parents weren’t happy.

The three also exchange fond memories of clomping their heels down on Carnation milk cans to create tap shoes; placing playing cards in bicycle spokes as noisemakers; and sledding in Pine Hollow near Mount Baldy, and “Suicide Hill” (named for a rumor that someone jumped into the lake there).

They recalled school rules requiring skirts. In the winter, they'd wear pants outside and change into skirts before class. They remember the Pullman Standard whistle blowing, alerting the area at 7:50 a.m. that it was a snow day. Already well on their way, they'd turn around and head home.

As they grew up, Jane attended Alice’s wedding reception on May 8, 1948. Alice met her late husband, Lloyd Kroening, because they lived across the street from each other growing up. They had three children: Keith Kroening, Kim (Kroening) BaRoss, and Kristi (Kroening) Bingham. Lloyd passed in 1970, but Alice has 10 grandchildren and eight great-grandchildren.

Jane’s husband was also from the west side, but they didn’t meet until the day she took her 9-year-old sister to the beach in 1946. She and Peter Stachowski married on Nov. 29, 1947, and he passed in 1991. The couple had two children: Kathleen Stachowski Barns and Laura Stachowski Baktys.

Leona met her late husband, Roger Schlaak, at church, and then at the Oasis ballroom when he and his buddy cut in on a dance with her and a friend. They celebrated their 71st anniversary on April 24, 2019, before he died on Aug. 17. The couple had three daughters: Carol (Schlaak) Weiler, Jan (Schlaak) Skierkowski, and Elaine (Schaak) Criswelll; six grandchildren; and seven great-grandchildren.

Just out of high school, Alice and Leona worked together as operators for Indiana Bell.

“We had the old-fashioned telephones then. People would pick up the phone and we would say, ‘Number please,’ and we would plug in the numbers,” Leona said. "We had to ring those numbers by hand.”

Jane explained there were two- and four-party lines available in the city, but county residents could have as many as 10 on a line.

They recalled good times after work with co-workers, enjoying pizza and drinks at Greco Casa Del Lago in Beverly Shores. On a whim, one evening Leona secretly placed a rubber worm in Alice’s drink.

“Alice threw the drink – glass and all – across the restaurant and I had to pay for the glass,” she said with a laugh.

Jane said she “stayed faithful to the west side because I worked in the payroll department of the prison.”

As adults, the trio made more memories when Alice would host get-togethers in her home.

And because of their mothers’ bond, Leona’s daughter, Jan; and Alice’s daughter, Kim, also share a special friendship and call each other’s mom “Aunt.”

“As long as I can remember, we’ve been friends. I consider Jan’s whole family my family," Kim said.

“We would get together every weekend.“We would go to Meyer Drug Store (in Park ‘N Shop) and drink phosphates and be all grown up with our little purses. We would meet and eat Salerno butter cookies, placing our fingers through the hole in the middle, and solve all the world’s problems.

"My dad took us in his Buick convertible flying over railroad tracks – no seatbelts then. He owned Kroening Coal, Oil & House Moving and we would go to work with him and then to the penny store for candy.

“Where the skate park is now in Pullman Park, there would often be carnivals and fairs. My dad would take us on rides such as ‘The Bullet.’ Jan and I are still big rollercoaster people,” she said.

Kim said she was only 14 when her father died, and Roger (Jan’s father) treated her as one of his own.

Kim and Jan attended Barker Middle School together, but Jan graduated from Elston in 1973 and Kim from Rogers in 1974.

Yet, the friendship remains.

Kim lives in Long Valley, New Jersey; and Jan in West LaFayette, but the two regularly vacation together and meet for special occasions.

She recalled her dad actually went by the name of Barney instead of his given name, Lloyd, but Jane would call him Lloyd because they grew up two houses from each other. She said her mom and Jane reconnected a few years ago when they were at Life Care Center together.

“I’m very thankful that they (Alice, Leona, and Jane) are still together and can carry out their friendship in their latter years. It’s awesome that they can be together and still be friends,” Jan said.

“They are all strong, strong women,” Kim said. “Growing up in the Depression wasn’t easy for them. All they had were their friends and they were there for each other.

"The message is that life hands you stuff, you plow through, and go on. They taught us all that family is what is most important. We stay together – we stick together.”