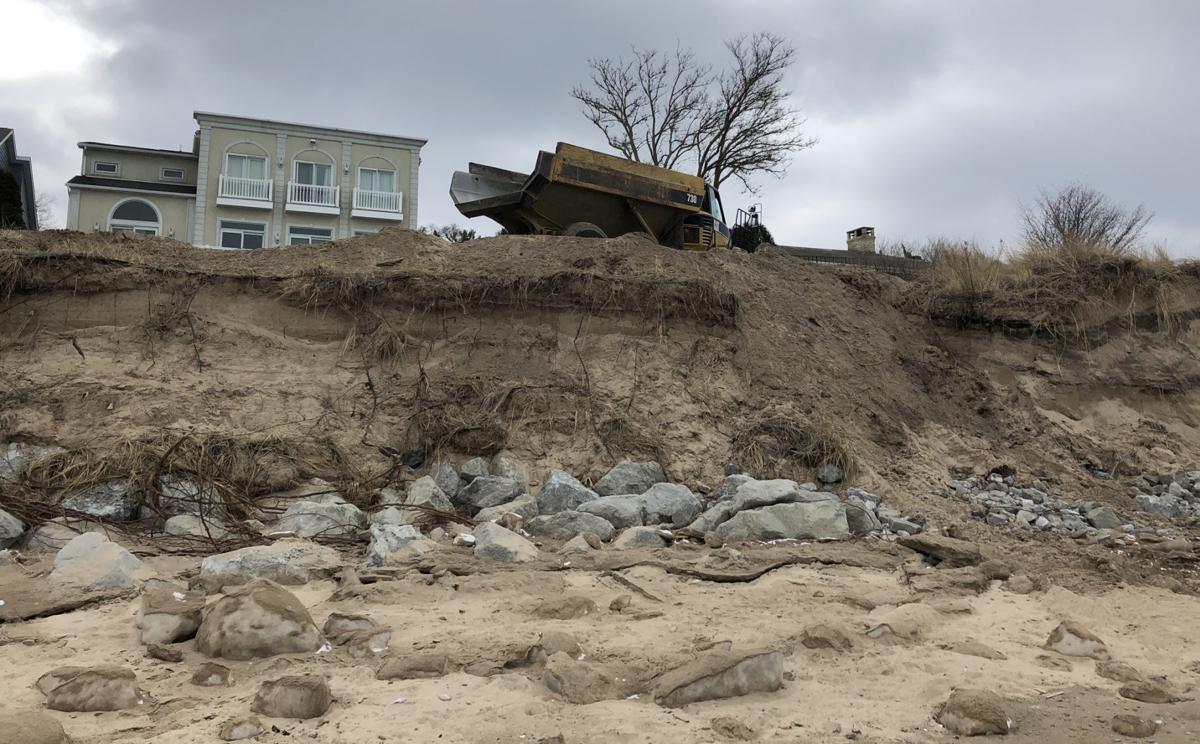 A home along the Lake Michigan shoreline in Ogden Dunes is one of several in Northwest Indiana threatened by rising waters from Lake Michigan. 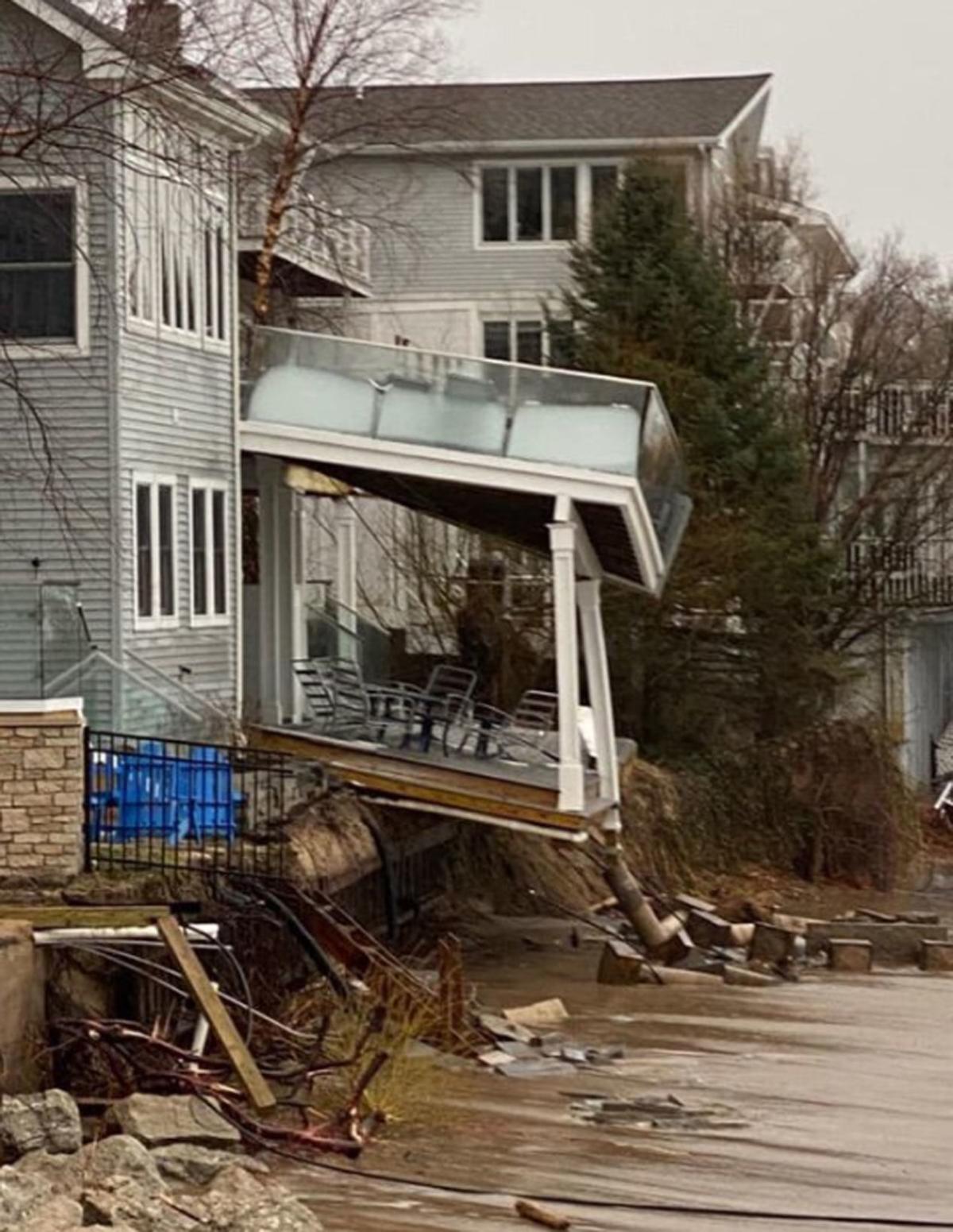 The porch of a home in Long Beach has lost its support structure and faces imminent collapse into the lake. State officials, however, say that until public infrastructure actually collapses, they do not think an emergency disaster declaration is warranted. 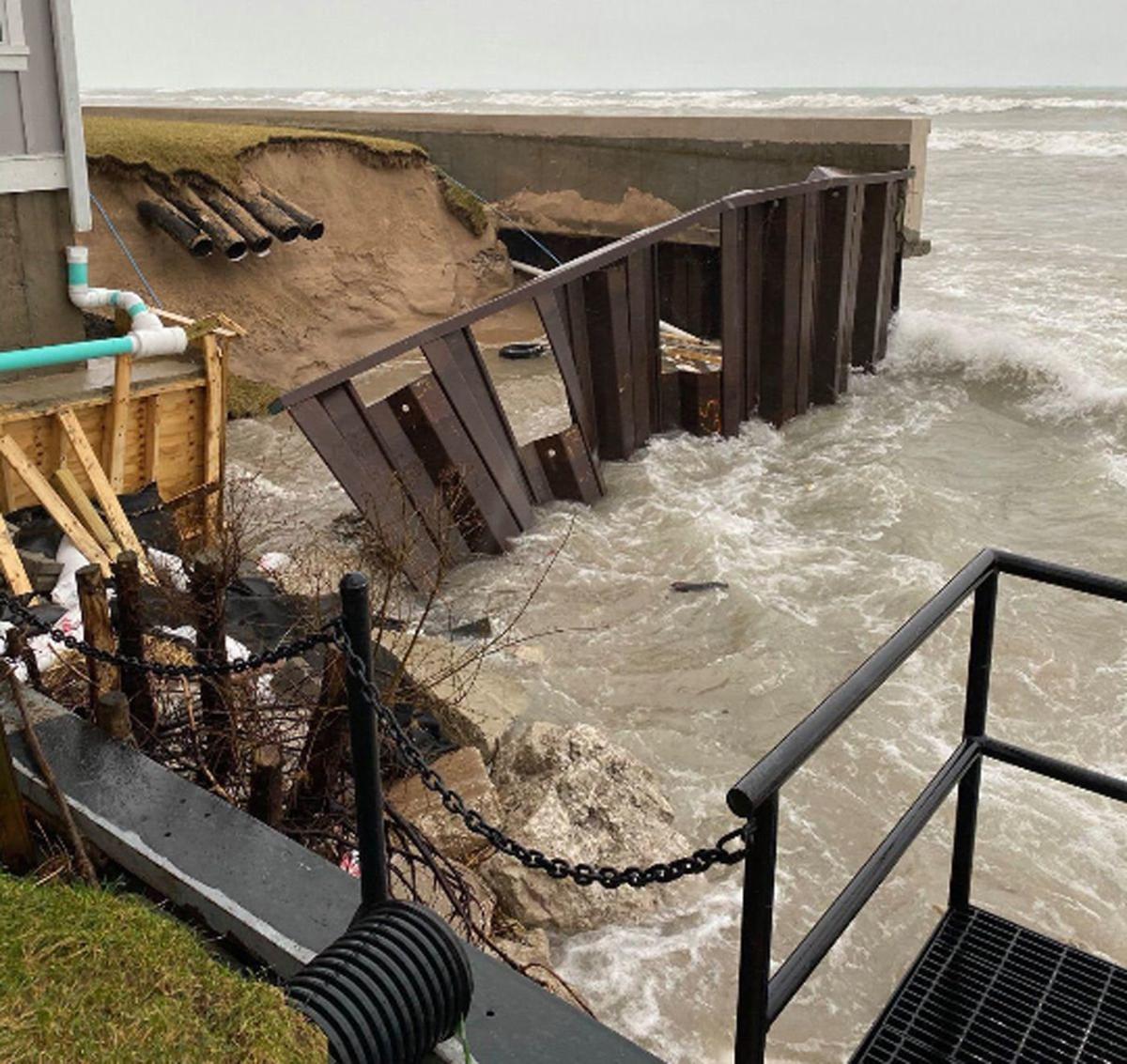 Homeowners along Lake Michigan, including this Long Beach property, have taken emergency measures, including seawalls, to try to hold back the high lake waters, most to no avail. 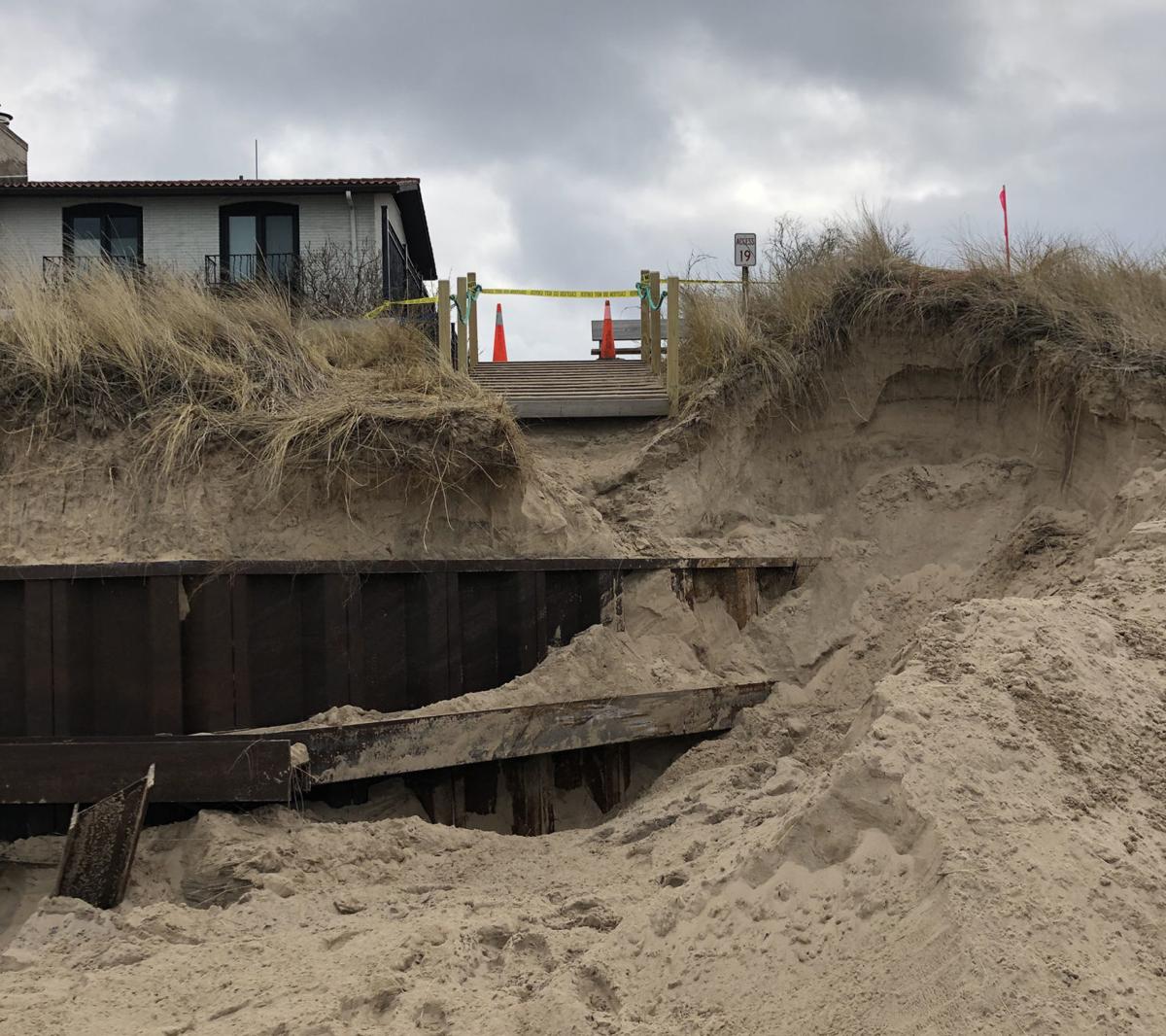 Officials in Ogden Dunes have closed off all beach access as the waters of Lake Michigan continue to threaten beaches and homes. Beaches have also been closed in Beverly Shores, Portage and Long Beach.

A home along the Lake Michigan shoreline in Ogden Dunes is one of several in Northwest Indiana threatened by rising waters from Lake Michigan.

The porch of a home in Long Beach has lost its support structure and faces imminent collapse into the lake. State officials, however, say that until public infrastructure actually collapses, they do not think an emergency disaster declaration is warranted.

Homeowners along Lake Michigan, including this Long Beach property, have taken emergency measures, including seawalls, to try to hold back the high lake waters, most to no avail.

Officials in Ogden Dunes have closed off all beach access as the waters of Lake Michigan continue to threaten beaches and homes. Beaches have also been closed in Beverly Shores, Portage and Long Beach.

BEVERLY SHORES — The mayor of Chicago and governor of Illinois issued local disaster proclamations this week to bring in funding help for lakefront areas hard hit by erosion.

Mayor Lori Lightfoot and Gov. JB Pritzker said the challenges along the lakefront are too much for the city to handle alone.

The proclamations will allow emergency funds to respond to damage and allow communities to apply for federal funding.

“If you don’t believe in climate change, Lake Michigan has a message for you: Wake up. Look what’s happening here,” U.S. Sen. Dick Durbin said in response to the lakefront damage, which has forced the closure of at least two Chicago beaches.

The agency also says future storms will cause further shoreline erosion, but unlike their Illinois counterparts, state officials in Indiana have rejected a disaster declaration.

That comes in spite of forced beach closures in Long Beach, Beverly Shores, Ogden Dunes and Portage; and erosion threatening to destroy homes and roadways all along the Northwest Indiana shoreline.

The lack of state help has led officials in Beverly Shores to attempt to ease the erosion emergency by creating a Non-Reverting Gift Fund to supply urgent financial aid for the crisis.

Gov. Eric Holcomb has refused to declare an emergency, which denies access to FEMA funds. Porter County has also denied further funding after assisting with signs along Lake Front Drive.

“We’ve used all of our funds to repair the most massive erosion scours immediately threatening Lake Front Drive, but the erosion is relentless this year,” Beverly Shores Town Council President Geof Benson said.

“Personal safety, parking lots and all of the infrastructure under the road are at great risk.”

In addition, Lake Front Drive provides the only access to the lakeshore for the Indiana Dunes National Park and World’s Fair Century of Progress Homes, both sources of major tourist revenue, he said.

Homeowners Nancy and Steven Schwab helped organize the fund. They own a home in direct line of a massive scour.

“It’s very frightening,” Nancy Schwab said. “What if there’s an emergency situation such as a fire or a serious health matter and emergency vehicles can’t get to our homes? What if the gas lines under the road explode?”

The fund has raised about $40,000, but current estimates place the cost of mitigation in the hundreds of thousands.

Donations are being accepted by The Town of Beverly Shores and are tax deductible, Town Clerk Ellen Hundt said. “Anyone who finds joy in the lakefront can contribute, not just residents of Beverly Shores.”

Benson said residents have attempted other methods to hold back the water.

“People have really stepped up with incredible skill sets, from driving a bulldozer to calculating engineering specifics to coordinating an elected representative campaign,” she said.

“But it’s going to take more than a bake sale to raise the kind of funds we need. We are one storm away from losing the road. We need that help now.”

Town Marshal Ed Clapp implemented weight restrictions on trucks accessing the lakefront, and a reduced speed limit of 15 mph to help preserve the road, which has gas, electric and water utilities underneath.

But the Indiana Department of Homeland Security said there isn’t enough damage to public resources to warrant federal disaster funds.

“To date, we are unaware of any loss of infrastructure (i.e. roads, bridges, public utilities, etc.) which would qualify for public assistance funding from federal or state disaster relief programs,” IDHS executive director Stephen Cox wrote in a letter to the lawmakers.

IDHS, and other state and federal agencies, have been monitoring the beach erosion, Cox wrote. He pointed out that Michigan hasn’t deemed a disaster or sought FEMA funds either.

Tallian said although the lake hasn’t damaged “public” infrastructure yet, there’s an urgent need for resources to prevent that from happening.

She pointed out that support beams for porches at lake-adjacent homes in Long Beach have collapsed; lake water has made its way past barriers and exposed septic fields, possibly resulting in sewage seeping into the lake.

She said Beverly Shores has already spent a “big pile of money” to prevent Lake Front Drive from getting washed out. “Surely we don’t have to wait until the road is in the lake before we can ask for assistance.”

Many affected communities have declared local beach erosion emergencies; and the Northwestern Indiana Regional Planning Commission has created a committee to demand a more helpful response from state and federal authorities.

The National Park Service has worked with Beverly Shores to provide trap bags along Lake Front Drive, because the erosion is threatening areas of the Indiana Dunes National Park.

“We wouldn’t allow that kind of work if it was only to protect private homes,” Park Supt. Paul Labovitz said. “If East Lake Front Drive goes, it will make that part of the park harder to get to.”

Also impacted could be one of the park’s historic attractions – the Century of Progress Homes from the 1933 World’s Fair, located on East Lake Front Drive.

Labovitz said he is working with Indiana Landmarks, a statewide historic preservation organization, to possibly move homes in danger of destruction. The Stone and Florida houses are two that may be moved inland.

The superintendent said a long-term answer is needed, not a temporary fix.

“The lake is on a 30-year cycle; what can we do now as current managers to prevent something like this from happening again?” he said.

“I’m hopeful that the state, federal and local communities can exist in a sustainable way along the lake.”

Officials are also warning people to use caution along the lake.

“The sand will collapse if you get too close, and with the amount of debris there is very dangerous,” he said.

“The more people that go down there the weaker it gets. You can walk it 10 times and then the 11th time is the limit. You just don’t know.”

Labovitz agreed, noting that while several beaches – from Long Beach to Portage – are closed, the high waves and lack of shelf ice have attracted “as many visitors to the beach this winter as in summer.”