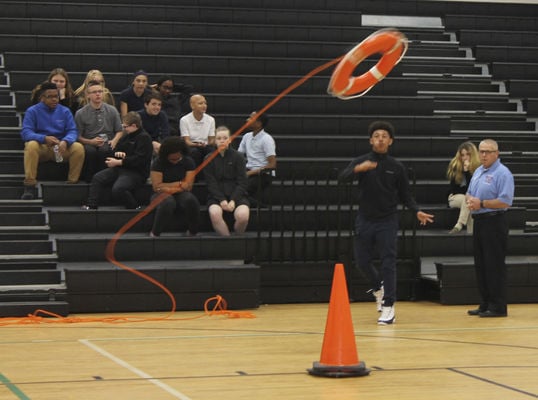 Photos by Kelley Smith During lake safety training at Barker Middle School Tuesday and Wednesday, students took turns tossing a life ring past a parking cone, which was used to represent a drowning victim. 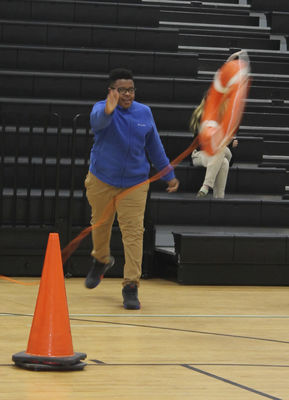 The Michigan City Fire Department installed life rings at the pier at Washington Park in 2016, and they have been used multiple times since then to save lives, according to MCFD Public Information Officer Tony Drewiecki. 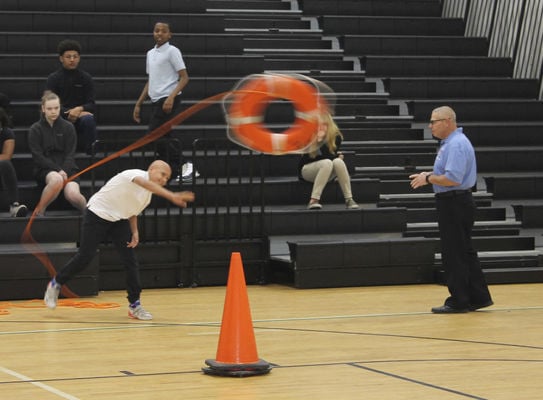 Drzewiecki, right, also taught the students how to coach victims to grab the line and how to bring them safely to shore.

Photos by Kelley Smith During lake safety training at Barker Middle School Tuesday and Wednesday, students took turns tossing a life ring past a parking cone, which was used to represent a drowning victim.

The Michigan City Fire Department installed life rings at the pier at Washington Park in 2016, and they have been used multiple times since then to save lives, according to MCFD Public Information Officer Tony Drewiecki.

Drzewiecki, right, also taught the students how to coach victims to grab the line and how to bring them safely to shore.

MICHIGAN CITY – Memorial Day marks the unofficial start of summer – and beach season. Do you know the five signs of drowning?

Students at Barker Middle School do after receiving lake safety training this week – and they practiced what to do in the event they should encounter a drowning person, especially at the local lakefront.

“We’re teaching the kids about the use of life rings, and how important it is for them to get the feel of it prior to ever having to use one,” said Tony Drzewiecki, public information officer for the Michigan City Fire Department.

“We’re teaching them to throw it past the victim, to bring it back at a safe angle, and how to coach the victim to grab onto it," he said. "So many times, people want to jump into the lake or a pool and try to rescue somebody, and that’s the worst-case scenario to try to do.”

The MCFD installed life rings along the pier at Washington Park a couple years ago, and they’ve already been used to save lives on a few occasions, Drzewiecki said.

Kyle Kazmierczak, training officer at the MCFD, talked to students about lake and pier safety as well.

He related the subject matter directly to them by remembering 14-year-old Travis Mensah, a Barker student who drowned while swimming near the pier with a friend in 2016.

Barker curriculum coach Amy Hamann talked about "the science of the lake" with students, and noted 42 people drowned in Lake Michigan in 2018.

The signs of drowning are not what movies and television would lead one to believe, she said. Drowning is not screaming and flailing one's arms above the water.

The five signs of drowning, Hamann said, are:

• Head tilted back, look of panic or eyes glassy or closed, and hyperventilating or gasping

• Vertical in water – not using legs for forward swimming movement

• Ladder climbing motion, hands rarely out of the water or lightly breaking the surface – hair over forehead or eyes.

Barker Principal Frederick Greene, a U.S. Marine Corps veteran, said it was mandatory in the military to become “water qualified.” And it’s important to him to bring lake and water safety training to his students.

“We want to be good community members and educate our students not only about academics, but also personal health, personal safety,” he said. “… It’s just important that if you’re around water, you respect water and know how to deal with water and how to address safety concerns if you’re going to be around water.”

Lake Michigan can be dangerous

Last year was the deadliest on the Great Lakes since the GLSRP began tracking drownings in 2010. And so far in 2019, the project is tracking seven drownings, and possibly an additional four, which happened in the last week. Overall since 2010, there have been at least 747 Great Lakes drownings. Of the 2018 drownings, 117 were in Lake Michigan, including six in Northwest Indiana and two in Michigan CIty.

One of the possible drownings being tracked this week is a South Bend man who is still missing after he disappeared off Porter Beach last weekend. A search is underway for Jacob Sandy, 23, last seen heading onto Lake Michigan to kayak. Porter Police found Sandy’s car in the parking lot near the beach, and a search has been underway since Monday.

The GLSRP offers the following reminders for those heading to the water over the holiday weekend:

• Water temperatures are in the 50s at the south end of Lake Michigan, and swimmers are advised not to jump off boats or piers. If you enter the water, ease your way in and wear a lifejacket. Cold water shock can cause an involuntary hyperventilation gasp reflex, so know the rules of hypothermia.

• This summer the beaches may seem more crowded because the water lines are higher and there’s literally less beach space. In addition, check local sandbar formations. There may be sudden drop-offs, inshore holes, or debris/trees submerged along some shorelines.

• Wear a lifejacket – especially while traveling on boats. “You wouldn’t try to put your seatbelt on during a car crash. If an incident happens while boating, you likely won’t be able to put on your lifejacket in a life and death situation,” Bob Pratt, GLSRP executive director, said.

• It’s likely been several months since most people have been to the beach, so swimming endurance may be low and cold water will incapacitate swimming ability.