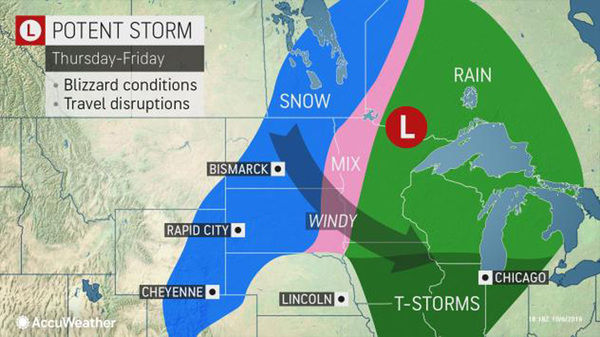 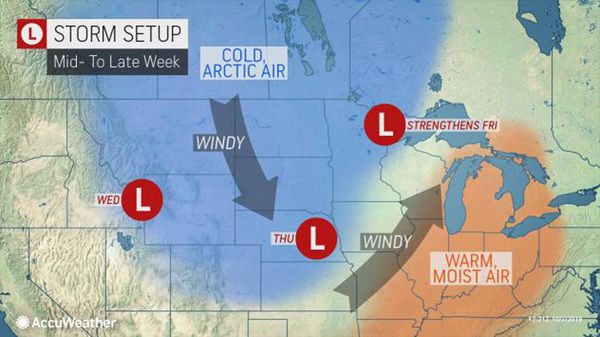 MICHIGAN CITY – There are not many places in the country where you could have temperatures near 90 one week, and frost the next, but Northwest Indiana is one of them.

After unseasonably mild temperatures just last week, and highs expected to push to the upper 70s later this week, things will go downhill fast this coming weekend, according to AccuWeather and the National Weather Service, with storms and much cooler temperatures expected.

"The same storm diving through the northern Rockies this week and bringing another wave of snow will make its way into the Great Lakes, sending wet weather through parts of the Midwest," according to AccuWeather meteorologist Isaac Longley.

"The warm air across the East through midweek will clash with cold, Canadian air behind this system. As a result, the storm will strengthen and become quite potent as it moves into the Midwest," he said.

And according to the National Weather Service forecast for La Porte County, "It still looks like there is potential for frost this coming weekend, with the greatest chance on Sunday morning."

That will follow a few more pleasant days as a surface high pressure ridge remain over the area into the middle of the week, keeping conditions dry. But while daily highs will remain in the upper 60s to low 70s, even the upper 70s on Thursday and Friday, the nightly lows will be dropping into the mid-40s this week, before rebounding to 60 on Thursday night.

The rain is expected to move in Friday, and the low will drop to 44 on Friday night and 38 on Saturday night, with highs only in the low 50s Saturday and Sunday.

Temperatures in the mid-30s can bring on frost, though temperatures must fall to between 28 and 32 to trigger a hard freeze, according to the Weather Service. While it does not keep a record of frost reports, the average date for the first 32 degree temperature in La Porte County since 1980 is Nov. 1-10, with the earliest being Sept. 28 in 1991, and the latest being Nov. 11 in 1985, according to the NWS.

Accuweather says precipitation will arrive in Missouri, Iowa and Minnesota on Thursday, becoming more expansive into Friday. By Friday afternoon, precipitation will be stretched from Ontario to Texas and across the Great Lakes region.

Along the path of the storm's center, gusty winds may cause wind-whipped rain and chilly conditions, which could reduce visibility for motorists, senior meteorologist Alex Sosnowski said.

Precipitation across Minnesota will start off as rain Thursday night and Friday. However, plummeting temperatures on the back side of the storm will force the rain to transition to snow or a rain-snow mix, and "some of these areas are likely to experience 40-mph winds and low visibility conditions ... that reach or exceed the criteria for a blizzard," Sosnowski said.

Farther south, rain will be accompanied by rumbles of thunder in central and southern Indiana, with some thunderstorms having the potential to turn severe, according to Accuweather. Other than cloud-to-ground lightning, the greatest severe weather threats look to be flooding in low-lying areas and locally damaging wind gusts.

For the start of the weekend, the majority of the storms from Indiana and south will have dissipated, but there could still be lingering showers across parts of Michigan for Saturday.