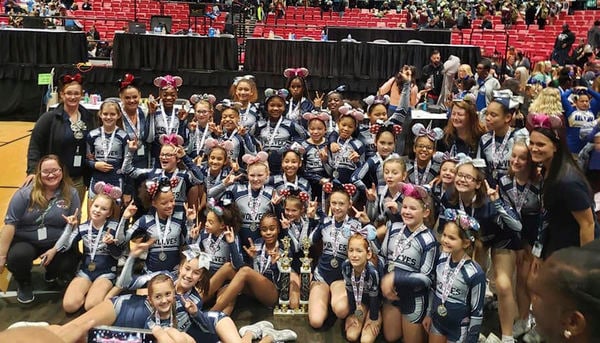 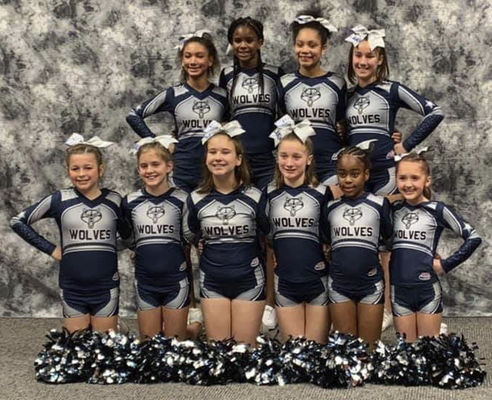 The Cheer Pee Wee Team also won first place in their division at regionals, but is not a travel team and will not be competing in the finals. 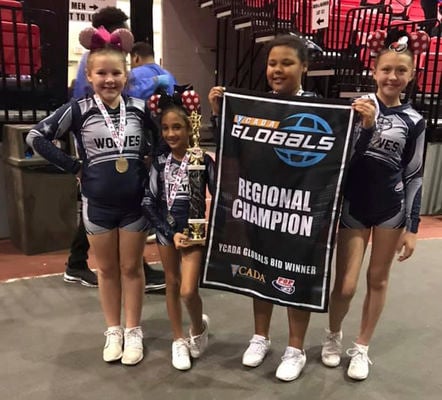 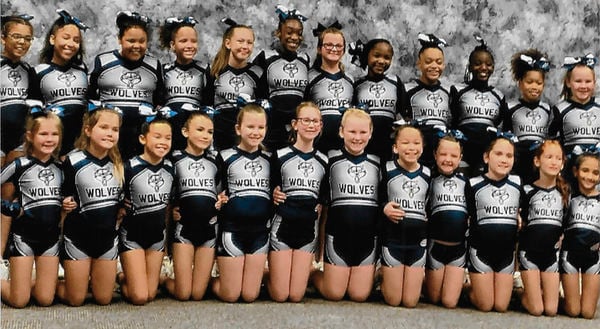 The Michigan City Junior Pee Wee team will compete in the Pop Warner National Cheer and Dance Championships on Dec. 11-13 at the ESPN Wide World of Sports Complex in Orlando, Florida.

The Cheer Pee Wee Team also won first place in their division at regionals, but is not a travel team and will not be competing in the finals.

The Michigan City Junior Pee Wee team will compete in the Pop Warner National Cheer and Dance Championships on Dec. 11-13 at the ESPN Wide World of Sports Complex in Orlando, Florida.

MICHIGAN CITY – For 24 area girls, there’s a magical ending to this season of Pop Warner Cheerleading and Dance.

On Nov. 3, the Michigan City Junior Pee Wee team placed first at the Mid America Regional Pop Warner Cheer Competition at Northern Illinois University in DeKalb. Now, the 8-12 year-olds, along with their families and coaches, will head to the Pop Warner National Cheer and Dance Championships on Dec. 11-13 at the ESPN Wide World of Sports Complex in Orlando, Florida.

“They hit everything,” Carla Shepherd, head coach, said about the performance at regionals. “It’s hard work. Cheerleading is a sport with hard-core athletics. Even at this age, they are athletes.”

The team’s routine consists of a combination of stunts, pyramids, tumbling and dancing; and unlike years before, the entire performance is set to music.

“It makes it a lot harder to stay on time now,” said Shepherd, who has 12 years of coaching experience with her three daughters and now her two granddaughters, Adrienne Shepherd Imes, 9, and Kendra Zbell, 10.

“It’s challenging stunting because you have to be on the same count,” agreed 8-year-old Bailee Edinger, who joined the team this year.

Shepherd spends hours coming up with just the right combination of song snippets to choreograph the routine. This year her team has been performing to clips of “Best Day Of My Life,” “Hit Me With Your Best Shot,” “We’re All In This Together,” “Respect,” “The Greatest Show” and more.

“Two minutes and 30 seconds is all the girls have to showcase all they’ve learned the entire season and practiced hours for,” she said. According to Pop Warner rules, the girls are only allowed to practice six hours a week, so they practice two hours on three days each week.

“When we practice those two hours, we probably only take a five-minute break,” Shepherd said.

“Our routines are strong,” Shepherd said. “The only thing that might hurt us is our age. And, half the team is brand new to my team.”

The Michigan City Junior Pee Wee Team is a young team in relation to the girls’ ages – about half are 8 and only three are 11 or 12, yet it’s likely they'll be competing against teams  made up of mostly 11- and 12-year-olds.

“At first, she was surprised at all the hard work that was involved – the three times a week, the Sunday football games cheering in the cold,” Tonya DeMartinis, said of her 10-year-old daughter, Olivia DeMartinis, new to the team this year.

“She finally realized what it is like to be in a sport and actually dedicating herself to improving every week. She likes working hard to get better. She started the season not able to do a cartwheel and now she can.”

Tonya said her daughter was hoping the team would quality last year, but, “Olivia said it was OK – they had 2019.”

“She was right – these girls brought it to the mat! They nailed their lifts and routine! You could see it in their eyes at regionals – they wanted it! They got first place, but it didn’t stop there,” said DeMartinis. “They have continued to practice, hoping to bring a trophy back to Michigan City. Olivia said she wants to win in Nationals, but also looks forward to seeing the competition at that level.”

Jaylin O’Neil, 12, said she is looking forward to “the excitement of doing the routines at competition” while 10-year-old Aniyah Morris admitted, “I’m really nervous because it’s going to be really big and a lot of people there.”

Shelby Fulford, 8, said she’s learned “not to make a mistake because you could fall.”

This is her first year on the Cheer Pee Wee Team. Her older sister, 11-year-old Grace Fulford, joined the team, also for the first time. It consists of ten 9- to 13-year-olds and is coached by Samantha Long. This team also won first place in its division at regionals, but since it opted not to compete as a travel team this year, won’t be competing at nationals.

“It’s been amazing watching them grow and I highly recommend the program,” said Grace and Shelby’s mother, Bethany Fulford.

“Four months ago, Grace wouldn’t trust her teammates to lift her two feet off the ground, but now she pops right up into a lift. It’s the same with Shelby; this is her first sport to be in. She flies up and down about 10 times in the 2.5-minute routine. Both my daughters have gained confidence and strength, and learned teamwork and trust.”

“Competitions are exciting and nerve-wracking,” she said. “It was so amazing to watch both my daughters’ teams get first place at Regionals ... These girls work extremely hard to be the spotlight for two and a half minutes."

Fulford admitted she's "a bit overwhelmed with planning a Disney trip within one month, especially during the holiday season, but how neat is it that these girls get to go to Disney World with their friends! I can’t wait to cheer on our cheerleaders at Nationals! So proud of all these girls!”

With a cost of $1,000 per girl, the team has been actively fundraising. The Fall Raffle, held at the Coolspring Volunteer Fire Department, is the biggest annual fundraiser, with all proceeds to benefit any Michigan City cheer and football travel teams competing in nationals. Anyone interested in sponsoring the team as they head to nationals can do so through the Facebook Page “MC Pop Warner.”

Megan Edinger, Bailee's mother, has been pleased with the “very strong relationships" with her teammates.

“It’s nice how they are all from different schools and have become friends,” she said. “They care about each other and become really close.

“Bailee has loved absolutely every minute of it,” Edinger said. “She has become more confident in herself and built very strong relationships with her teammates. Cheer has also improved her overall fitness and flexibility.

"Bailee does not stop smiling from the moment she hits the field to cheer or when competing in competitions. Signing her up for cheer was one of the best decisions we have made. The bonds she has made are irreplaceable. We are very excited to be competing at Disney and representing Michigan City and seeing the girls shine one more time!"