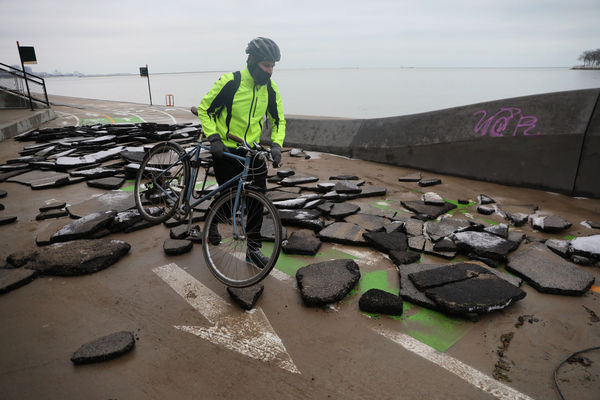 A cyclist navigates on Monday through broken chunks of asphalt on the lakefront path near East Grand Avenue and Ohio Street Beach in Chicago after strong waves pushed by the winds of a winter storm wreaked havoc along the Chicago lakefront over the weekend. Lake Michigan is at near-record-high water levels. 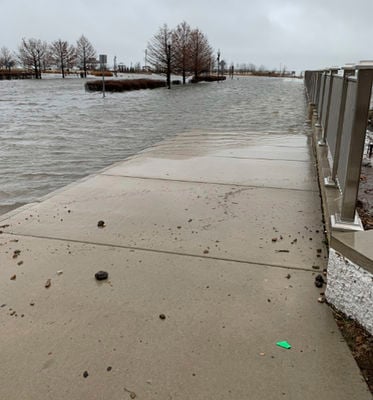 Waves crashed over the breakwater at Whihala Beach in Whiting on Saturday, leaving much of the park, including parking lots, flooded. 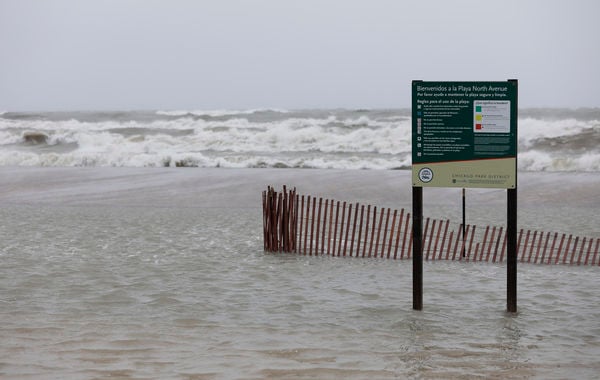 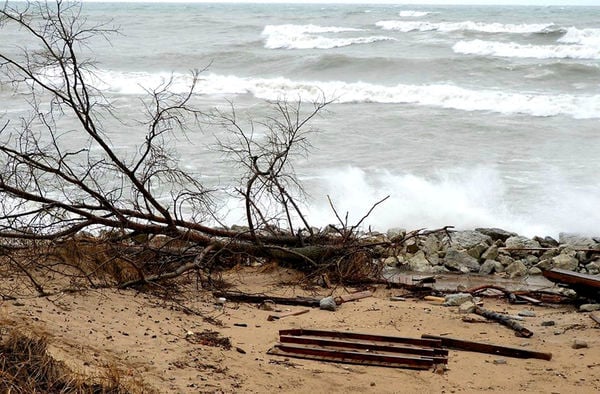 There's not much left of the beaches in Beverly Shores, and the weekend's storm did even more damage to the area, uprooting trees and leaving debris strewn along the lakefront.

A cyclist navigates on Monday through broken chunks of asphalt on the lakefront path near East Grand Avenue and Ohio Street Beach in Chicago after strong waves pushed by the winds of a winter storm wreaked havoc along the Chicago lakefront over the weekend. Lake Michigan is at near-record-high water levels.

Waves crashed over the breakwater at Whihala Beach in Whiting on Saturday, leaving much of the park, including parking lots, flooded.

There's not much left of the beaches in Beverly Shores, and the weekend's storm did even more damage to the area, uprooting trees and leaving debris strewn along the lakefront.

MICHIGAN CITY – From Wisconsin to Illinois, across Northwest Indiana and up into Michigan, the weekend's winter storm had a devastating effect on the Lake Michigan shoreline.

While the worst of the storm's wrath was felt along the Chicago lakefront and in Porter and Lake counties – beaches were inundated, infrastructure and lakefront home threatened – the impacts were felt on both sides of the lake.

"The multi-faceted, large storm system brought numerous impacts to Northwest Indiana and northern Illinois, including heavy rain and localized flooding, followed by strong winds and the most significant lakeshore flooding in the area in years," the National Weather Service said.

North to northeast winds frequently gusting to 40-50 mph or higher Saturday brought large, battering waves into shoreline areas and significant flooding in Chicago – where the closure of Lake Shore Drive was necessitated – and lakeshore communities in Indiana, including Michigan City, according to NWS.

Rainfall of 1.5-3 inches fell across much of the area on Friday night resulting in rapidly rising water levels on Lake Michigan and pushing area rivers into flood stage. Wintry precipitation also impacted the area, including icing and snow that resulted in slick roadways.

The strongest wind gusts recorded in the area were 52 mph at O'Hare Airport; 51 at Midway Airport; 48 at Gary Airport; and 43 at Valparaiso Airport.

"The Lake Michigan water level is running at near-record high thanks to a longer-term wet pattern over the past two years," according to NWS and the Army Corps of Engineers.

In Portage, the city issued the following warning on Saturday: "We are aware of the serious flood issues being experienced throughout the city. Our crews have been out working since early morning, working hard to clear storm drains and address these issues. Our stormwater system is slowly draining water around the city and it will take time. Please use caution while driving around the city and avoid flooded roadways."

NWS said, "The lake was near record low levels in early 2013, but over the past six-plus years, levels have increased 6 feet, NWS said. Lake level records at Calumet Harbor in Chicago go back through 1903 and are based on monthly averages. The record was observed in October 1986, which we are currently very close to."

Farther inland, the Kankakee River crested in La Porte County (Davis) at 11.07 feet on Saturday evening, but had dropped to 10.88 feet by Monday afternoon. Minor flood stage is 10 feet, and moderate flood stage is 12 feet. The river is expected to be back at 8 feet by late in the week, though more rain and snow in the forecast has resulted in continuation of a Flood Warning for La Porte, Starke and St. Joseph counties.

Trail Creek in Michigan City Harbor crested at 10.4 feet early Saturday morning, but was back down to about 9 feet by Monday. Farther upstream the creek crested at 10.97 feet Saturday evening, and had receded to about 5 feet Monday afternoon.

For the lakefront, more problems could be in store. The Weather Service has issued a Lakeshore Flood Watch for La Porte County and Berrien County, Michigan, in effect from 4 p.m. Wednesday through 6 p.m. Thursday.

Southwest winds of 10-20 mph Wednesday afternoon will shift northwest and increase to 20-30 mph by Wednesday evening, and continue into midday Thursday before diminishing.

"The strong northwest winds are expected to create high wave action, which will likely lead to beach erosion and lakeshore flooding along the immediate lakeshore," NWS warned. "Wave heights of 5 to 10 feet (occasionally up to 15 feet) may cause additional erosion to the lakeshore areas and some inland flooding."

A Lakeshore Flood Watch means conditions are favorable for lakeshore flooding and residents on or near the Lake Michigan shore should take action to protect property.

In its forecast discussion, the Weather Service said, "Hold onto your seats and keep your arms inside – the ride as a roller coaster of temperatures and weather conditions is expected into the upcoming weekend. Highs Wednesday will reach the mid 40s to mid 50s but will come at the cost of dealing with some showers.

"The ride will dip back down as temperatures drop back into the 30s Thursday and Friday. Another system is still poised to impact the area this weekend. Precipitation will start as light snow Friday (with some accumulation expected) before warmer air arrives to change the precipitation over to a wintry mix.

"Travel issues are possible Friday afternoon into Saturday morning before temperatures briefly climb above freezing Saturday afternoon. By Saturday night into Monday, much colder air arrives with highs only in the 20s and lake effect snow close to Lake Michigan."

The recent rain also prompted the Indiana Department of Natural Resources to issue a cautionary statement about trails in the area.

"Avoid using muddy trails," IDNR said. "After the recent rainfall, many soft surface trails may be muddy. Using soft surface trails too soon after a rain can create messy and potentially dangerous situations for the trail user as well as damage to the trail. Instead, use paved trails to walk, run or bike. Find a paved trail using the Indiana Trail Finder at dnr.IN.gov//outdoor/2604.htm."