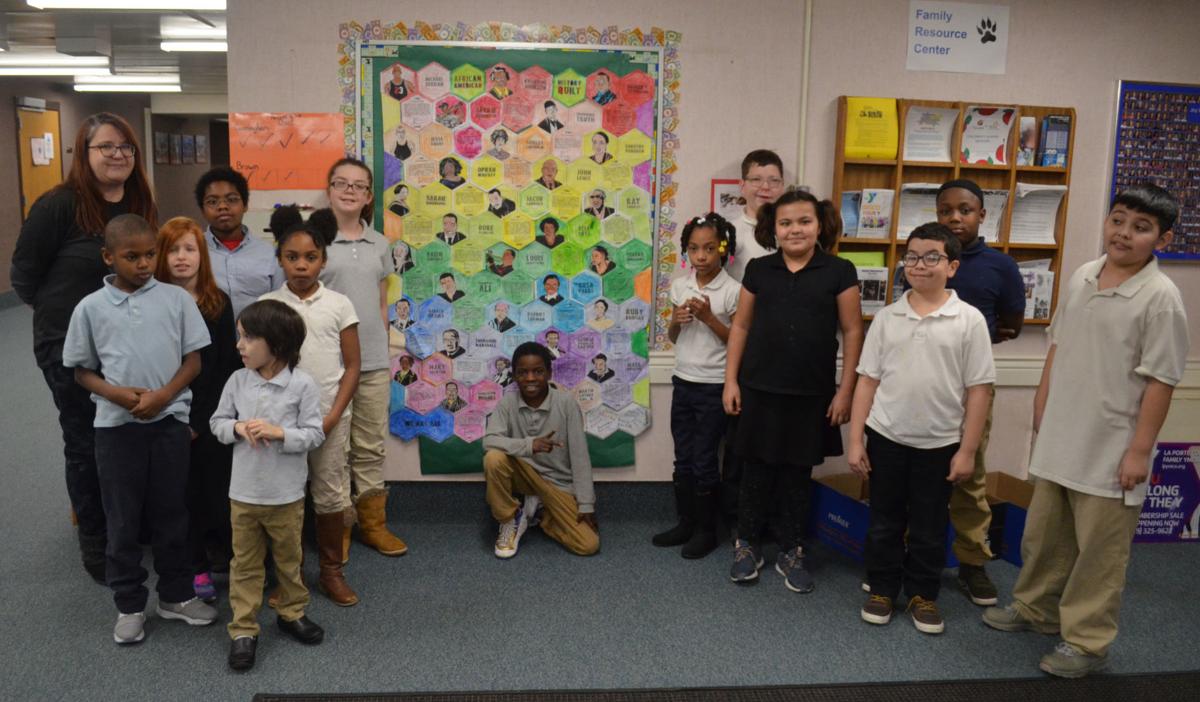 The quilt-like paper display, with summaries of famous African Americans, hangs in the entryway of Joy School for Black History Month.

The quilt-like paper display, with summaries of famous African Americans, hangs in the entryway of Joy School for Black History Month.

Her 13 students, ranging in age from second to sixth grade, have pieced together a paper display titled the African American History Quilt, which hangs in the entryway of the school.

“We did it as an introduction, so we are still learning about all these people. We will be studying them more in depth throughout February,” said Rozinski, who got the quilt idea off of the website teacherpayteachers.com.

“When I needed something new for Black History Month, that is where I went looking,” she said.

She said the project gives students an opportunity to read non-fiction texts and research for more information on their Chromebooks.

The quilt designates three squares for each of the 30 famous African Americans the students are studying. One square contains the individual’s name, one is an illustration, and the third lists a brief summary of his or her life and accomplishment.

“I think it benefits them to see people doing great things that look like them and to see racial mirrors,” she said. “It helps them have an understanding of history. The kids get really excited about Black History Month. It’s a favorite topic of theirs.”

Fifth-grader Derion Parks was especially interested in the assignment so he prepared the top and bottom title pieces. He also enjoyed looking up more research about his contributions to the quilt, which included Rosa Parks and Michael Jordan.

Rozinski said Derion is also working hard on a poster about Kobe Bryant for the 2020 Michigan City Human Rights Commission Black History Month Contest, with the theme of “African Americans Whose Vision and Works have Impacted the Future.”

Jamie Mark, who is in the sixth grade, said, “I liked Jackie Robinson because he’s a baseball player and I like baseball, too.” He also studied Oprah Winfrey and Mary Jackson, the first black female engineer at NASA.

Fourth-grader Charles Hibbett was drawn to another Charles – Dr. Charles Drew, a surgeon and medical researcher known for his ground-breaking discoveries with blood; as well as Dorothy Vaughan, a mathematician and human computer who worked for the National Advisory Committee for Aeronautics (NACA).

“I chose her because I liked her jacket,” Hibbett admitted, and also said he thought Ruby Johnson Jones, the first African American faculty member, was the “best one,” even if he wasn’t assigned to her piece in the quilt project.

The famous African American who stood out in fourth-grader Antwone Wright’s mind was “The Peanut Guy” – George Washington Carver – because he “made things out of peanuts.”

As a whole, the class favorites?

“They love Rosa Parks, Martin Luther King Jr., and Barack Obama,” Rozinski said. “Some of the girls were into Katherine Johnson, Dorothy Vaughan and Mary Jackson.”

The class is learning about the individuals according to their time period in history, including the end of slavery, the rise of the African American influence, the civil rights movement, and present day, she said.

Trying to grasp the large span of time, it’s not unusual as she introduces a new person for the students to ask, “Are they dead?”

She tells them that although many of the subjects have died, there are plenty such as former President Barack Obama that still inspire today.