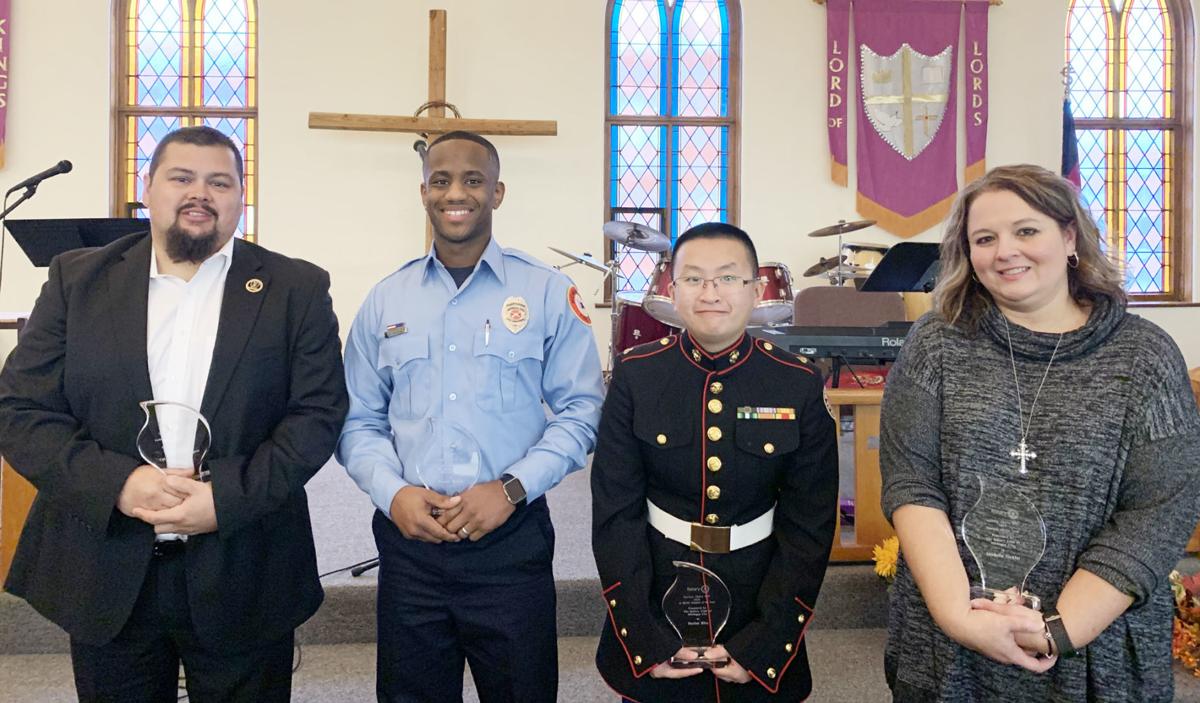 Michigan City Rotary Club Service Above Self award recipients include, from left, Police Officer of the Year Francisco Rodriguez, Firefighter of the Year Dwayne Brown, MCHS JROTC Student of the Year Declan Rice, and Teacher of the Year Michelle Sickles. 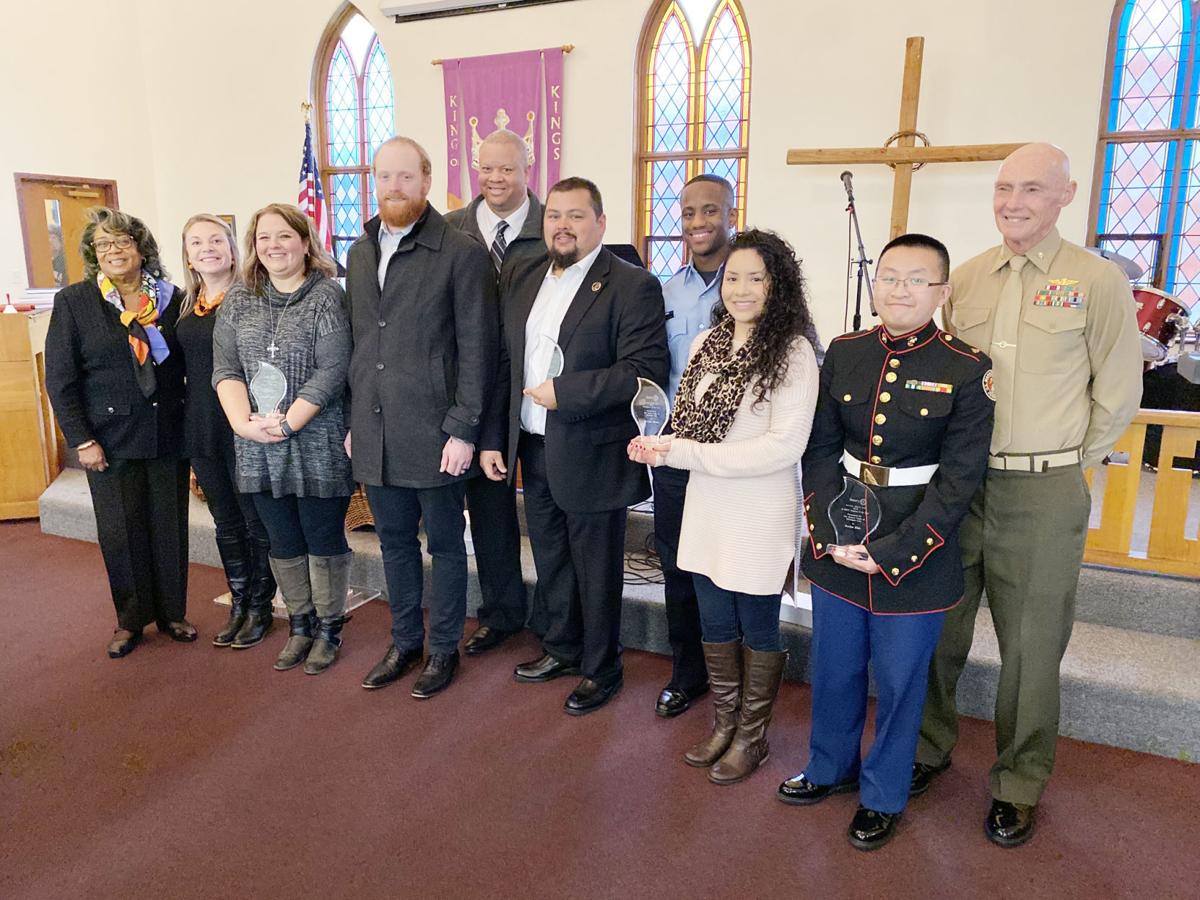 Rotary Club Service Above Self recipients stand with the people who nominated them.

Michigan City Rotary Club Service Above Self award recipients include, from left, Police Officer of the Year Francisco Rodriguez, Firefighter of the Year Dwayne Brown, MCHS JROTC Student of the Year Declan Rice, and Teacher of the Year Michelle Sickles.

Rotary Club Service Above Self recipients stand with the people who nominated them.

MICHIGAN CITY — The Michigan City Rotary Club recently bestowed its annual Service Above Self awards to four individuals in the community.

According to the Rotary Club, Service Above Self is a mission to serve, and to do so based on the principles of the 4-Way Test:

Is it the truth?

Is it fair to all concerned?

Will it build goodwill and better friendship?

Will it be beneficial to all concerned?

According to the Rotary Club, Service Above Self means to leave your egos at the door and do what is best for the people you are serving.

The following four awards were presented:

Teacher of the Year: Michelle Sickles

Sickles has served in many capacities at Edgewood School. According to her nominators, she willingly assumes any role that serves to promotes the school. She volunteers her personal time and has also persuaded her husband to help.

In 2019 she and her teammate started Kindness Academy. According to Edgewood, Sickles saw a need for students to be of service to others. She said students want to be kind, they want to be helpful, some just need to be shown how. There are more than 60 students that attend the weekly Friday meeting. This is a position she is not paid to do. They began by trying to make the staff feel special. They sent little notes and sweets to the staff to let them know that someone cared about them.

Then, the Kindness Academy students and the families of Edgewood donated winter clothing, shoes, and coats to the families of Stepping Stones shelter in Michigan City. They partnered with Operation Fill the Foxhole, in Indianapolis, to send boxes to U.S. military deployed overseas and stationed away from their families. They were able to send 2-dozen care packages. They are currently collecting supplies to help the La Porte County Animal Shelter. Cathy Albrecht came from Abbey Ace Therapy Dogs and talk to the students about kindness toward animals, as well as how to avoid being bitten by a dog. April is national dog bite awareness month.

Many of the students in Kindness Academy have become role models for others, Edgewood said.

“By being in the Academy, we now have a generation of students that know the importance of putting, “’Service Above Self.’”

Declan Rice was born in China, moved to the U.S. as an infant and graduated from the Renaissance academy. He has been an active member of the JROTC, being on the drill team, participating in numerous parades and ceremonies, earning the highest GPA, in addition to his 90 hours of community service. Besides supporting school activities, he has participated in community service events ranging from veteran’s festivals to Bell ringing for the Salvation Army. He is one of JROTC’s most motivated cadets.

Firefighter of the Year: Dwayne Brown

In addition to performing his job at an exemplary level, Brown demonstrates an extraordinary commitment to his fire department, as well as, the general public, said the Michigan City Fire Department. According to the MCFD, Brown takes it upon himself to provide unsolicited support and service to new recruits and existing staff members. He not only attends training during his off hours, but during training sessions, he discerns individual needs of his colleagues and provides key information, recommendations, and/or direction.

According to the MCFD, his fellow firefighters say his positive attitude is infectious and he loves to give. At a moment’s notice, he will take time out of his busy schedule to assist the Michigan City Fire Department with many of its fundraising events benefiting the community.

He also gives back to the community beyond his role in the MCFD. Currently, Dwayne serves as a pastor and volunteer for his church. In this role, he has facilitated the development of his community’s youth, and the care for its elderly. Some of his most recent work has come by the way of the Michigan City Senior Center harvest ball.

Cpl. Rodriguez is a 14-year veteran of the Michigan City Police Department and his current assignment is that of an Investigator/ supervisor assigned to the La Porte County Drug Task Force (LCDTF). As a little background, the LCDTF is a county wide drug eradication task force, comprised of Investigators from several police agencies within La Porte County.

According to the MCPD, Rodriguez uses his hard work, dedication and professionalism to make La Porte County a safer community. Over this past year, Rodriguez has worked hard to rid the community of not only illegal drugs, but also those individuals that choose to illegally possess firearms, the MCPD said. But Rodriguez is also a seasoned supervisor to whom many younger Officers look to in times of crisis and need.

According to the MDPD, in 2019 he was a pillar in directing a historically successful Drug Unit, directed an abundant amount of training for rookie officers, and presented training courses to help the continuing education of even the most seasoned officers and investigators. Even amongst all of this, Corporal Rodriguez recognizes the need to keep learning and adapting. He has personally sought out and attended many training courses that continue to help push the boundaries of investigative techniques within Law Enforcement.