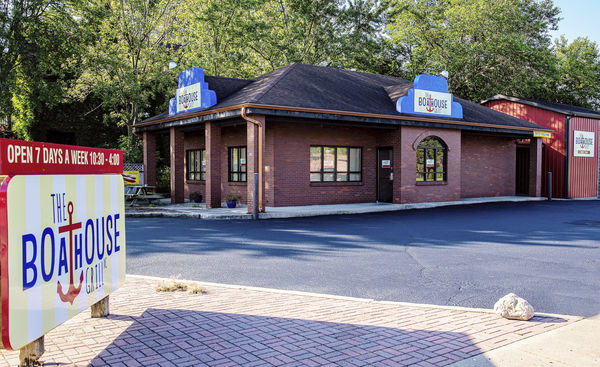 The Boathouse Grill in Michigan City. 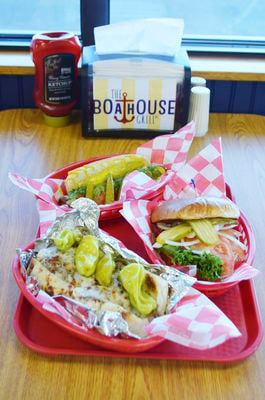 Photo by Kim NowatzkeChicago-style hog dogs, hand-hammered pork tenderloin sandwiches and Italian beef sandwiches, pictured clockwise, from top, are three of the many entrees available at The Boathouse Grill, a new restaurant in the former Top Dog location at 701 Washington St. 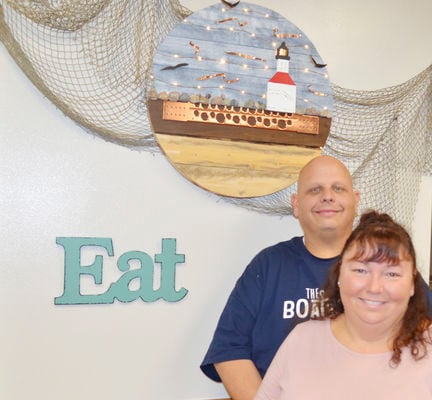 Photo by Kim NowatzkeJay and Jamie Slutzkin are the owners of The Boathouse Grill, a new restaurant that opened Nov. 20 at the corner of Washington and 7th Streets.

The Boathouse Grill in Michigan City.

Photo by Kim NowatzkeChicago-style hog dogs, hand-hammered pork tenderloin sandwiches and Italian beef sandwiches, pictured clockwise, from top, are three of the many entrees available at The Boathouse Grill, a new restaurant in the former Top Dog location at 701 Washington St.

Photo by Kim NowatzkeJay and Jamie Slutzkin are the owners of The Boathouse Grill, a new restaurant that opened Nov. 20 at the corner of Washington and 7th Streets.

MICHIGAN CITY — As they carry on a family tradition, owners Jay and Jamie Slutzkin hope their customers feel like a part of their family. The two opened up The Boathouse Grill, at 701 Washington Street, on Nov. 20 and are looking forward to serving the community through Jay’s culinary talents.

“I enjoy cooking and people,” Jay said. “I’ve always been the person to have everybody over and cook for them. It brings me a lot of joy to see someone leave with a smile.”

“He doesn’t just cook for the family – he cooks for the entire neighborhood,” Jamie said.

“There’s always plenty. You don’t have to ask to stop over for dinner. The portions are about right for here, so it’s working out,” he added with a smile.

Jay’s restauranting roots run deep, as his late grandparents Allen and Della Slutzkin owned Roxanne’s Drive-In from the mid '50s to the late '70s. Then his father, the late Mike Slutzkin, and his mother, Gwen Slutzkin, owned The Rib Crib in the early '80s.

“The joy of my mom cooking and making everybody smile with food is what I do,” explained Jay.

“I want people to feel like family when they come in – for it to be a warm fuzzy feeling – like there’s always an extra seat at our dinner table,” Jamie said.

“We want this to be an extension of their family,” Jay added.

Jamie, who also works as director of recreation and events at Rittenhouse Village in Michigan City, is no stranger to entrepreneurship. She and her mother, Linda Mickevicious, opened Beach Bum Jewels 14 years ago, and Jamie also previously owned Treasures by the Lake.

The Boathouse Grill is located in the former Top Dog location at the corner of Washington and 7th Streets.

But, “we want our own identity – not to be know as the ‘hot dog place,’” said Jamie, who mentioned that the location has been updated and remodeled.

Jay said his specialties are his hand-hammered pork tenderloin sandwich, his Italian beef sandwich — baked fresh on-site — and his eight-ounce all-beef hamburgers. Also homemade at The Boathouse Grill are the chili, made by the recipe used at Roxanne’s Drive-In, and the potato salad, which is Jamie’s late grandmother, Ruby Slatten’s recipe.

Jamie designed her own hot dog creation, the Octopus Dog, for the restaurant. Essentially a hog dog partially sliced and fried to resemble an octopus, the entree was designed especially with kids in mind. Another out-of-the-ordinary menu item is the chopped salad with noodles, which contains romaine lettuce, bacon bits, egg, red onion, tomato, tortellini noodles, and Italian dressing.

The Slutzkins held a soft opening Nov. 16 with a make-your-own hot dog bar. It was standing room only most of the day with more than 200 in attendance and at least 300 free hot dogs distributed. A grand opening event is planned for early spring when weather will permit more outside dining.

Also in the works are an expanded menu, pick-up catering of such items as Italian beef, pulled pork, baked chicken and more; and a drive-thru. Operating hours will expand too for the warmer weather season. The dining room, which seats 40, is now available for after-hours private parties.

“The support from the Fegarus family and our neighbor Pete Lange (owner of Lange’s Old Fashioned Meat Market at 218 W. 7th Street) has been amazing,” Jamie said.

“I’m so excited to have Jay on our block," Lange said. "He’s a first class guy and we’re lucky to have him.”

Jay is pleased with his location, which required a new sign seen by northbound traffic with Washington Street now a two-way street.

“We’re centrally located and within walking distance of the beach, Lighthouse Place Premium Outlets, and the Uptown Arts District,” he said.

The Boathouse Grill has already been active in the community through their sponsorship of An Evening On The Runway + Afterparty at Friendship Botanic Gardens presented by the Downtown District Merchants on July 13.

The Slutzkins plan to participate in the First Friday Art Walk events when the restaurant’s hours expand as well as the Taste of Michigan City.

The Boathouse Grill is open seven days a week from 10:30 a.m. to 4 p.m. and can be reached at 219-814-4127. More information, including the restaurant’s menu, can be found at www.theboathousegrillmc.com, on Facebook at “The Boathouse Grill,” or on www.yelp.com.