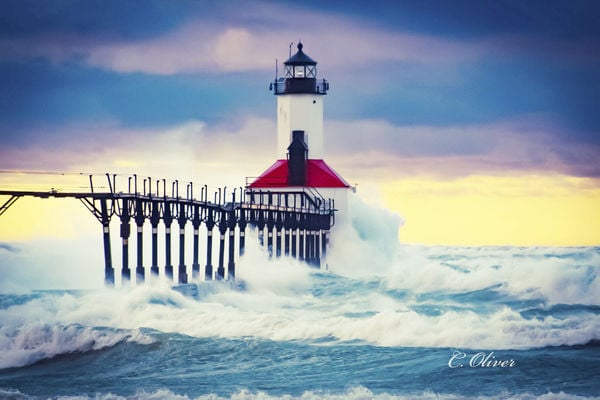 The photo Chris Oliver, owner of Infinite Painting & Design, took of the Michigan City lighthouse on Oct. 20 that gained widespread popularity on Facebook. 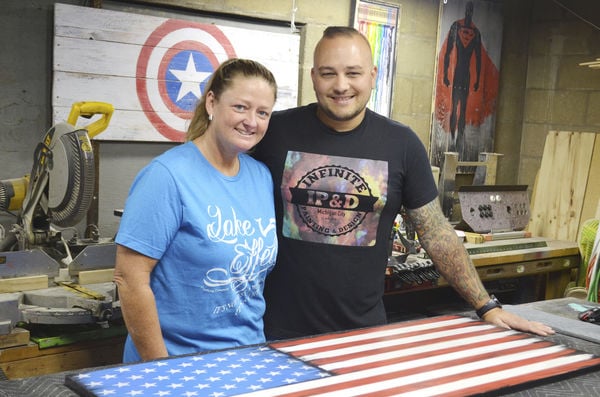 Photo by Kim NowatzkeJamie and Chris Oliver at Infinite Painting & Design, 601 South Calumet Avenue, where Chris is “just trying to leave a mark in the world like everyone else” with his customer artwork and more.

The photo Chris Oliver, owner of Infinite Painting & Design, took of the Michigan City lighthouse on Oct. 20 that gained widespread popularity on Facebook.

Photo by Kim NowatzkeJamie and Chris Oliver at Infinite Painting & Design, 601 South Calumet Avenue, where Chris is “just trying to leave a mark in the world like everyone else” with his customer artwork and more.

MICHIGAN CITY — “Something from nothing.” It’s one of his artworks’ slogans that reminds Chris Oliver of the beginnings of his business, Infinite Painting & Design, 601 South Calumet Avenue.

“Every time there was a coloring contest as a kid, I would win them,” he explained. “Art has always been my thing.”

While a freshman at Marquette High School, this life-long resident won first place in a Michigan City logo contest for his lighthouse design.

As a teenager, Chris built houses with his uncles and gained valuable woodworking experience. He worked a few years at an airbrushing kiosk in Marquette Mall creating artwork on signs, T-shirts, helmets and more.

But, “the city wasn’t as driven about art, so I was shy about putting myself out there,” he explained.

After high school, Chris worked for B & E Marine for five years in the shipping/receiving, parts and service departments.

“They are still huge supporters of everything I do,” he said.

Then, after working for another painting company, Chris started his own house painting business, Infinite Painting, in 2006.

And then he and his wife, Jamie, “couldn’t find a coffee table that fit our couch, so I just started building furniture and that led to more art.”

Chris began focusing on custom-made art pieces as well – creating something from nothing.

“I started with pallet wood, getting them from businesses that discarded them,” he explained. “It takes a lot of time to break down pallets and get them ready to be painted.”

“The flags are one of my favorites,” said Chris. “It’s very special to some people.”

His work can be seen at Body Gallery too. Owner Scott Yettaw and tattoo artist James Robbins “have been my mentors and pushed me along,” said Chris. “Michigan City has great support.”

And as his business began to grow and he “got back to his roots,” Chris noticed his hometown’s focus on art and its importance.

“I thought I’d lost it (my artistic talent), but I hadn’t,” he said. “It’s hard for me to keep inventory because it sells so fast.”

In 2015 Chris came up with the catchy slogan, “Lake Effect. It’s Not Just A Warning. It’s A Lifestyle,” and decided to try out his “side pipedream” on T-shirts, sweatshirts and hats. Locally, they can be found at Beach Bum Jewels and B & E Marine; Beach Bum Jewels also carries his artwork.

With the help of his friend, Adam Wood, who owns Laidlaw Productions, he produced a promotional video for his clothing line. It includes footage from several local businesses including Franklin Street Barbers, Carlson’s Drive-In and Matey’s Restaurant. In addition, area points of interest such as the “You Are Beautiful” sign on U.S. 12, Washington Park and the Lighthouse are featured. Just a few minutes in length, it covers “a day in Michigan City from sunrise to sunset.”

The video was seen on www.infinitepaintingdesign.com and social media outlets. It was also featured in the Michigan City Video Fest earlier this month.

In addition to the “Lake Effect” slogan, there are 11 other designs including “Exit 34B,” “Something for Nothing,” and others.

“This third year we have brought in more colors. They sell out as soon as we get them. We can’t keep them,” said Chris. “I’ve filled orders for Guam, Poland – all over the country.”

“I don’t know what I would do without her, especially with the clothing line,” Chris said about his high-school sweetheart and wife of 16 years, Jamie Oliver. Together, they have two sons, Logan Oliver, age 16, and Eli Oliver, age 7.

In 2016 Chris added the word “Design” to his business name and “Infinite Painting & Design” was born.

With the days of pallets behind him, today he primarily uses grade B pinewood for his signs unless a customer specifically requests another kind of wood.

His multi-medium creations are in any specific size, though he “loves making big things.” The largest at 8-feet wide and 4-feet tall can be seen on the home page of his website, www.infinitepaintingdesign.com.

In 2016 Chris added simple rope lights to his customer signs, and the next year introduced LED lights on and in his projects. This year the LED lights are Wi-Fi integrated and can be controlled with a remote or smart phone.

“I like to one-up the art – offer something different,” he explained. “The LED lighting (on my signs) sets me apart.”

“It’s crazy the amount of people that give him free range on his projects,” Jamie said. “They say, ‘Do what you do.’ They trust him. He’s a perfectionist –that’s for sure.”

Jamie said that Chris “likes the emotion that you get from people.”

“It’s all heart-driven. It’s never about the money,” he explained. “If it’s not about the heart then I don’t want to do this anymore. Art has been in my blood. It doesn’t feel like work. It’s all passion – all love.”

Chris’ artwork has already been a part of several charity benefits and special events, such as Gamers for Giving and Michigan City’s Nerdy Con, and he hopes to participate in more. At the latter, “Everyone there thought I was a vendor from Chicago,” he said.

On Oct. 20 Chris combined two of his passions, storm-chasing and photography, together with his love for lighthouses to capture a spectacular shot of Lake Michigan. By the next morning, the Olivers were shocked to see that his Facebook post of the photograph was shared by WSBT-TV and was going viral. Already, there have been requests for canvases of the print.

Recently Chris was gifted with airbrushing equipment from a customer.

“People have been asking me to get into air-brushing … I still have a few tricks up my sleeve I haven’t gotten to yet,” he said.

“At the end of the day, it’s all about the legacy. This stuff will be gifted to someone else. This stuff will outlast me,” said Chris, summing up what he does as “Just trying to leave a mark in the world like everyone else.”