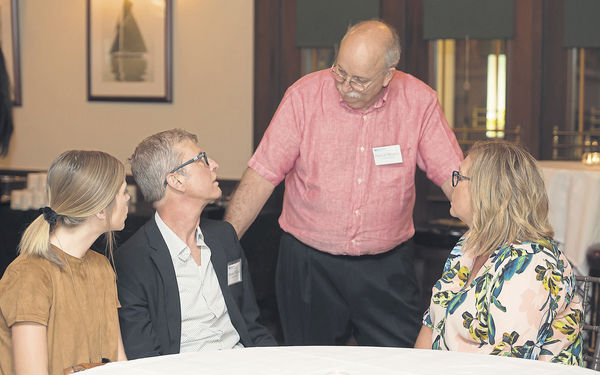 Patrick Meaney of La Porte, standing, speaks with Randy Wilgus of Valparaiso as Northwestern Medicine celebrated the five-year anniversary of its Lung Transplant Program. Meaney was one of the first patients to receive a lung transplant in 2014. 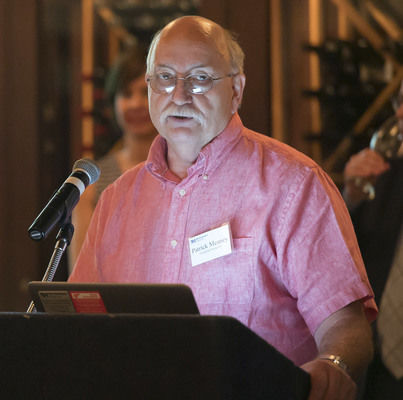 Patrick Meaney of La Porte dicusses how a lung transplant changed his life during the Northwestern program in Chicago.

Patrick Meaney of La Porte, standing, speaks with Randy Wilgus of Valparaiso as Northwestern Medicine celebrated the five-year anniversary of its Lung Transplant Program. Meaney was one of the first patients to receive a lung transplant in 2014.

Patrick Meaney of La Porte dicusses how a lung transplant changed his life during the Northwestern program in Chicago.

CHICAGO – Northwestern Medicine recently marked the five-year anniversary of the health system’s lung transplant program and a La Porte man was one of those with reason to celebrate. Since launching the program in 2014, nearly 100 patients have received lung transplants at Northwestern Memorial Hospital.

“Northwestern Medicine has one of the premier organ transplantation programs in the country, and we pride ourselves on delivering high-quality, multidisciplinary care to the Chicago metro area,” said Dr. Rade Tomic, a pulmonologist and medical director of the Lung Transplant Program. “Our wait-times for new lungs are one of the shortest in the United States, and all of our patients on the waiting list have received lungs.”

In September, lung transplant recipients gathered with members of the transplant team to celebrate the five-year anniversary. Prior to the celebration, they participated in the Pulmonary Fibrosis Foundation Walk at Diversey Harbor. Among the patients in attendance were 65-year-old Patrick Meaney of LaPorte, who was one of the first patients to receive a lung transplant in 2014; and 61-year-old Randy Wilgus of Valparaiso, who received a bilateral lung transplant last spring.

“Before my transplant, I was on death’s door. My options were hospice or a lung transplant,” said Wilgus, who was diagnosed with idiopathic pulmonary fibrosis. “They put my name on the wait-list in early April, and I received a double-lung transplant less than two weeks later. Thanks to my donor, their family, and the incredible team at Northwestern Medicine, I have my life back and don’t take a single day for granted.”

Most patients eligible for lung transplants are dependent on oxygen to get through the day and suffer from pulmonary fibrosis, cystic fibrosis, chronic obstructive pulmonary disease or other advanced lung diseases. The typical evaluation time for a lung transplant at Northwestern Medicine is five days, and the patient is notified the following week if they’re a candidate.

"Surgeons only have about six hours to transport lungs from a donor and transplant into the recipient. In addition, pre- and post-transplant care requires a highly coordinated effort by many different disciplines. That's why it's so important to have a comprehensive and experienced group of physicians and staff leading the way."

More than 80% of patients survive one year after surgery, and about 56% survive five years. While transplant patients follow-up regularly with their doctors after surgery, the goal is to help them get back to doing things most people take for granted – going back to work, grocery shopping or visiting friends and family.

“Before my lung transplant, I could barely play with my granddaughter,” said Meaney, who was diagnosed with alpha-1 antitrypsin deficiency, a genetic disorder that can result in lung disease. “Thanks to my donor, I have a new purpose. It’s all about family and friends. My best years are still ahead of me.”

“I look at life so differently now,” said Wilgus. “I want to give back and counsel other patients who are going through the transplant process. It’s all about helping others and sharing stories.”

During the anniversary celebration, the Northwestern Memorial Foundation announced the launch of a patient assistance fund for the Lung Transplant Program. It helps cover expenses such as gas, parking, lodging and food for lung transplant patients and their caregivers.

During inpatient stays, caregivers often take unpaid time off work to be with the patient, and this can continue for several months after discharge. Post-transplant, patients and caregivers are at the hospital multiple times weekly for follow-up appointments and travel costs can quickly add up.