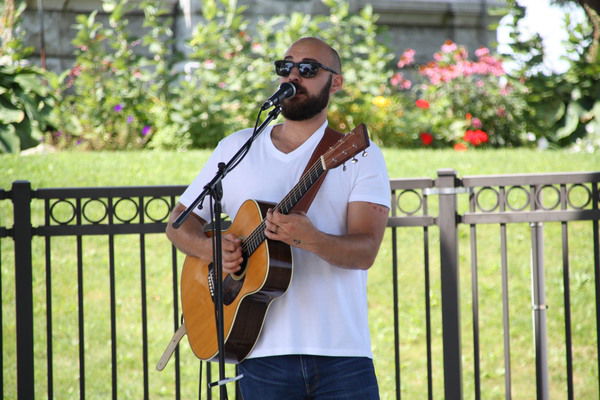 Andy Steinke / For The News-DispatchMatt Gabriel performs at the John E.N. Howard Band Shell in St. Joseph, Mich., on Aug. 21 as part of the Brown Bag Concert Series. Gabriel returns to Southwest Michigan on Sunday to close out the Weko Beach Concert Series in Bridgman. 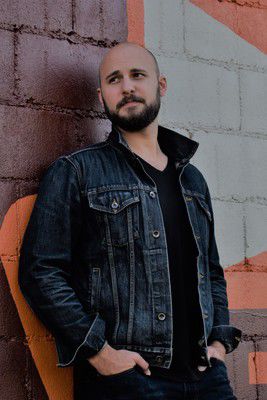 Matt Gabriel recently recorded a performance with his band at Frederik Meijer Gardens in Grand Rapids, Mich. The recording will be used for an upcoming live album.

Andy Steinke / For The News-DispatchMatt Gabriel performs at the John E.N. Howard Band Shell in St. Joseph, Mich., on Aug. 21 as part of the Brown Bag Concert Series. Gabriel returns to Southwest Michigan on Sunday to close out the Weko Beach Concert Series in Bridgman.

Matt Gabriel recently recorded a performance with his band at Frederik Meijer Gardens in Grand Rapids, Mich. The recording will be used for an upcoming live album.

BRIDGMAN, Mich. — Spend a couple hours with Matt Gabriel, and you’ll learn a lot about him.

His middle name – William – which he shared with a young fan by the same name who introduced himself to Gabriel after his concert in St. Joseph, Mich., last week.

The combination to his briefcase – the one he bought at Goodwill, and had to crack himself, one digit at a time, because he left the store before realizing he didn’t have the code.

What’s in the trunk of his obviously-Michigan car – cans of Vernors ginger ale and camping gear, vestiges of a recent weekend trip up north.

His wife, Shay’s, dislike for large crowds of strangers – she prefers one-on-one conversations – and their little one on the way in February.

Gabriel, on the other hand, loves crowds, loves to entertain, loves to get to know people.

He says he just as easily could have been an actor or a painter, as opposed to a musician, if he had fallen in with a different circle of friends in high school.

He’s affable, charismatic, relatable and writes a catchy tune. And yet he still seems to be flying under the radar.

The 31-year-old Grand Rapids, Mich., artist says that might be his fault.

“I do all this myself, the booking, the PR,” he says over coffee between shows. “I think you almost need someone to do the PR, to reach out. I don’t think I realized that either. I kind of romanticized the nuts and bolts of being your own business owner, your own artist. I think I expected, not because of my ability, but just because you’d see in the movies, that people will reach out to you. ... I think you have to search out for (exposure) more than I realized.”

Gabriel wrapped up the Brown Bag Concert Series last week in St. Joseph, and will do the same on Sunday with the Weko Beach Concert Series in Bridgman, Mich.

He has been a part of the Michigan music scene since he was 15 years old, playing in a band called Unaltered with four of his friends.

“We’d play these bars, and they’d shove $200 in our hands, and shove us out the back door because we weren’t supposed to be there in the first place,” he says.

Ironically, the man now known, at least in part, for his solo acoustic shows only sang in the band.

“They’re so hand in hand now,” he says of playing guitar and singing, “I would feel strange without a guitar. If I just sang, that would feel really weird, just standing there, like, what am I going to do with my hands?”

While he still plays breweries, bars and other smaller venues, Gabriel says he’d like to get to the point where he can make a living playing festivals and concert series.

At this point in his career, audiences can expect to hear almost exclusively original music at his shows.

“I have weeded out having to play covers, which I think is a badge in itself,” he says. “(Venues would) say, ‘You have to play 50/50 covers/originals.’ I’d go, ‘OK.’ And I’d go and play almost all originals, and then they just wouldn’t fire me. They would hire me again.

Gabriel’s sound is best described as an amalgamation of roots, country, Americana and folk. He draws influence from musicians like Tom Petty, Jakob Dylan (lead singer of The Wallflowers, and Bob’s son) and John Mayer.

His most recent work includes 2016’s “Fiction” and last year’s “Earth Tones.” But his live shows feature songs from throughout his career.

“You know what’s funny,” he says, “when I took some of that (older) stuff off the internet a couple of years ago, I got all kinds of hell from fans and from friends. They were like, ‘Hey where’d that stuff go, that’s some of my favorite stuff.’ I’m like, ‘No, no, that’s garbage.’

“So that’s a huge thing that I had to learn, that even if you think that’s not your best stuff, someone else might think it is,” he says.

Gabriel says he plans to re-record some of his earlier lo-fi work now that he’s smoothed it out over thousands of performances, but first, fans can expect his first live album, recorded last month at Frederik Meijer Gardens in Grand Rapids, Mich., with his backing band.

While Gabriel plays his home state frequently, he isn’t opposed to traveling farther away. He just usually does it in shorter bursts.

“I enjoy traveling and touring more and more the older I get, the better I get at it,” he says. “I’ve been enjoying the smaller tours, where I go for a couple of days and come back. I’ll do four, five shows, and then swing back home. It works really well. You get to go back to those places every three, four months.”

Following his shows in St. Joseph last week, he set out on a short jog to Kentucky and Ohio, where he’ll play the next three days, before returning for Sunday night’s show in Bridgman.

He also has established loops to destinations like Toronto and Minneapolis.

“I would be OK with hitting the road full time, having my family with me,” he says, “because that’s the hardest part now. You’re pulled because you want to be with them, but you want to pursue a passion.”

He says his wife, who is self-employed as a designer, is supportive of his career and is on board with “us being The Traveling Wilburys.”

“So it’s amazing that the original songs, and doing this as an artist, keeps you awake on those 3 o’clock drives home,” he says. “There is all kinds of strengths in doing what you love.”