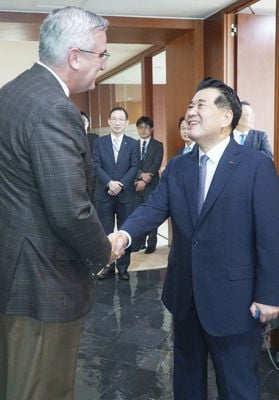 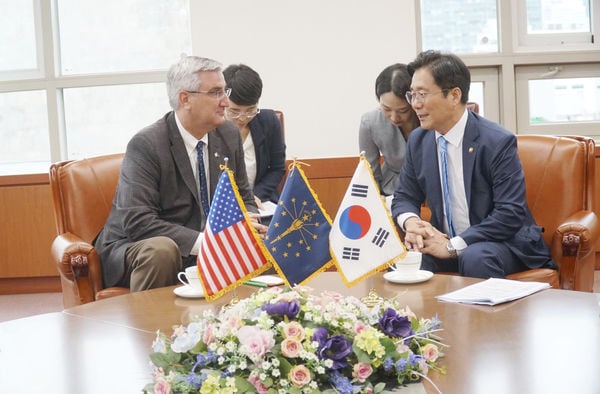 “Our first trip to South Korea was a success as we thanked investors for growing in Indiana, established relationships with key government officials and laid the groundwork for future growth in this partnership,” said Gov. Holcomb. “The Indiana-South Korea relationship is a two-way street, with South Korean companies thriving on Hoosier soil and Indiana companies selling their Hoosier-made goods in South Korean markets. The discussions we’ve had in Seoul these last few days have laid the groundwork for future growth on both sides of the Pacific.”

According to the Indiana Economic Development Corporation, Gov. Holcomb, Secretary Schellinger and delegation members met with executives from POSCO, the fifth largest steel manufacturer in the world. Headquartered in Pohang, South Korea, POSCO announced plans in 2016 to invest $19 million to open its second U.S. facility at the Ports of Indiana-Jeffersonville. Gov. Holcomb thanked the company for its commitment to Indiana and discussed ways the state can continue to support POSCO's Indiana operations.

According to the American Iron and Steel Institute, Indiana has led the nation in steel production for more than four decades, producing 26.7 million net tons of steel in 2018, which is more than twice as much steel as the next largest steel-producing state. Indiana manufactured more than a fourth of the nation's steel last year.

In the afternoon, Gov. Holcomb, Secretary Schellinger and IEDC Board Members Mark Neal, Kristin Marcuccilli and Fred Merritt met with Minister Sung Yun-mo of MOTIE to discuss Indiana's commitment to forming trade and business partnerships with South Korea and to deepen the relationship and friendship with South Korean government officials and business executives, the IEDC said.

According to the IEDC, recent highlights of Indiana's partnership with South Korea include:

• Since 2013, six South Korean businesses have committed to locating or growing in Indiana. Together, they plan to invest nearly $120 million in their Indiana operations and create more than 400 new jobs.

• In 2017, Daechang Seat Co., a South Korean automotive parts supplier, made plans to establish its U.S. headquarters and a major production facility in Indianapolis, investing $16.8 million and creating up to 180 new jobs.

• In 2016, POSCO, a multinational steel producer headquartered in South Korea, announced plans to establish operations at the Port of Indiana-Jeffersonville, investing $19 million and creating up to 60 high-wage jobs by 2018.

The company celebrated the grand opening of its Indiana operations in September 2017.