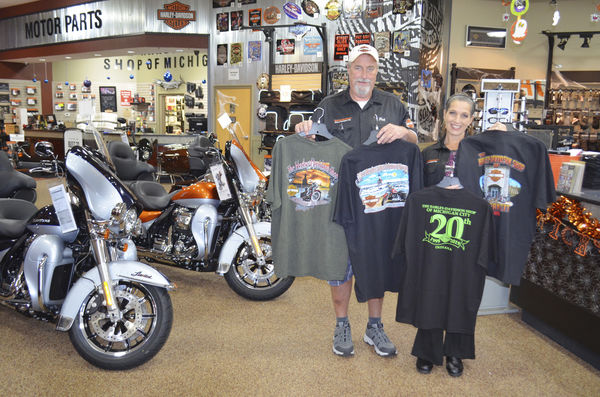 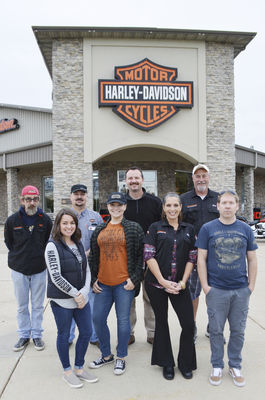 MICHIGAN CITY — After two decades, the Harley-Davidson Shop of Michigan City continues to cruise into the future with its homey atmosphere, friendly staff, community commitment, and the level of service their customers know they can rely on.

“We’re the only one in the group with a fireplace – we have a very homey and quaint atmosphere,” he said.

Harley-Davidson Shop of Michigan City also has two German shepherd mascots: Harley and Chopper. The Forszts rescued them as 6-month-old puppies from Lakeshore Paws, an animal rescue organization in Valparaiso.

Haggerty has more than 20 years with the company, and Parts Manager Tom “Fish” Fisher has been at the Michigan City location for 18 years.

“It’s a good atmosphere to work in – it’s a fun job,” said Office/Finance Manager Katlyn Slater, who joined the team 12 years ago.

Service Manager Joline Kochopolous, who started at the shop in April 2015, especially feels right at home there.

“She came in as a little girl with her parents and now she works here,” explained Slater.

“We have a lot of fun here – we enjoy our jobs and our customers. We laugh a lot. A lot of customers just come out and hang out,” said Slater.

“It’s a destination,” said Keith “Katfish” Jones, the general manager of Honda of Michigan City. “One thing about it is we have fun here – it’s a great atmosphere.”

Jones, who began with the Honda team 10 years ago, is a Michigan City native as well as Parts Manager Bob Schmitt, who began six years ago. The shop employs four others.

Customers will find a wide assortment of motor clothes for adults, children and even pets, functional riding gear, accessories, and other gift items at Harley-Davidson of Michigan City.

“If Harley makes it, we most likely can get it,” said Slater. “We can look at five other stores, so we have a lot of inventory to pull from.”

Shirts with customized backs featuring graphics exclusively for Michigan City are a popular item at the Harley-Davidson dealership. Some include the Washington Park Beach lighthouse, the Dunes and even the Indiana State prison.

“You can’t buy those at any other dealership,” Slater said.

In addition to general maintenance, inspections and repairs, the shop provides customizing services such as when a customer wants to add a backrest, saddlebags, or extra chrome to a bike. Those who are looking for a custom paint job can drop off their Harley at the Michigan City location for the service to be completed at Harley-Davidson of Valpo.

“Just off of I-94, we get a lot of travelers because of where we’re located,” he said.

Harley-Davidson of Michigan City is active in the community through several public events. It celebrated its 20th anniversary on Aug. 10 with bands, food, a beer garden and vendors. The shop held a successful second annual Trunk or Treat on Oct. 26 despite rainy conditions.

Today is the 20th annual Blue Ball Run & Chili Cook-Off where bikers complete a ride, which takes 1.5 to 2 hours, to five stops, and then return to the dealership to enjoy hearty chili.

“It’s always our biggest turnout for an event,” said Haggerty.

The shop has also supported Michiana Humane Society, the National Veterans Awareness Ride, Run for the Wall, Guardian Riders, the Michigan City Fire Department, local high schools, and other non-profits. As in past years, Harley-Davidson of Michigan City will once again be working with Toys for Tots to provide holiday smiles for children.

Harley-Davidson Michigan City is open 9 a.m. to 6 p.m. Tuesday through Friday and closed Sunday and Monday. For more information, go to www.hdmichigancity.com, look up “The Harley-Davidson Shop of Michigan City,” and “harleydavidsonmichigancity” on Instagram. The dealership may also be reached at 219-878-8885.