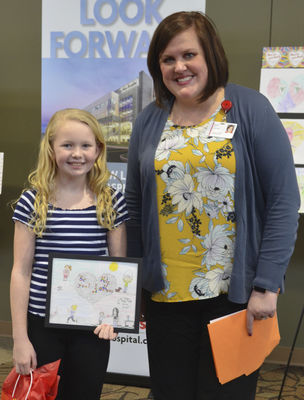 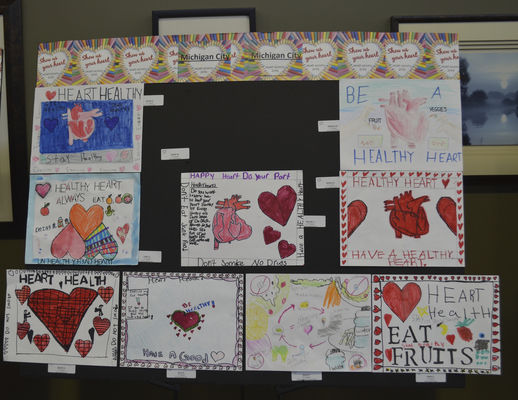 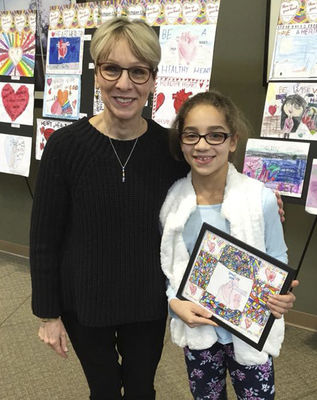 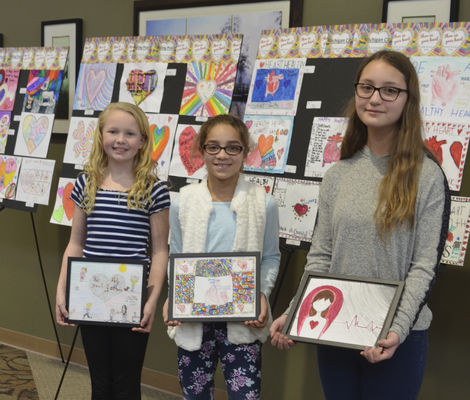 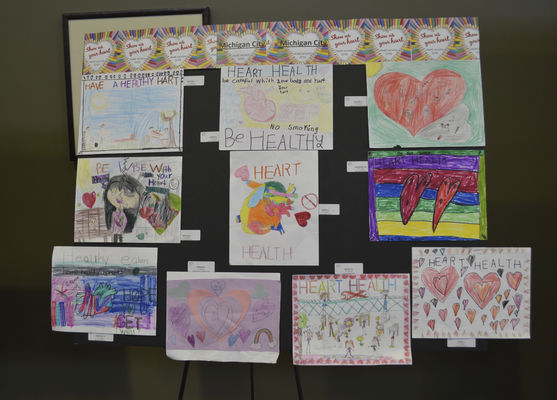 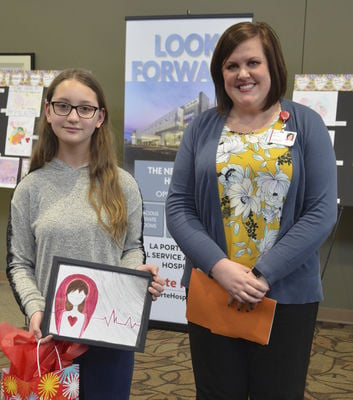 MICHIGAN CITY — It was a chance for local kids to “Show Us Your Heart.”

That was the theme of La Porte Hospital’s recent art contest to commemorate American Heart Month in February.

“The hospital chose this activity and theme to provide students with an opportunity to be creative and have fun while showing what a healthy heart meant to them,” hospital spokeswoman Kelly Credit said of the contest offered to elementary students for the first time.

Students were provided with 8.5-by-11-inch cardstock papers and encouraged to use any medium they preferred.

The three winners and their families, friends and teachers were invited to a presentation in the lobby of the LifeWorks Building.

There, La Porte Health System’s CEO Ashley Dickinson said the contest was held to “get the impression of what it means to be heart healthy for kids.”

“I looked up pictures on a phone of what hearts look like,” she explained.

The four areas around her drawn heart that resemble stained glass were “supposed to be colorful parts of the picture,” she continued. She said she put dual red and pink hearts in the four corners because she “liked the hearts together and that’s how hearts are usually portrayed.”

At the top and bottom of the entry are the words, “Just because your heart is sick doesn’t mean you can’t stay confident. La Porte Hospital saves lives and hearts.” The entry was a class assignment from Joy’s art teacher Sue Vigen.

Zoey Nelson, a fifth-grader at Kingsbury Elementary, was the winner from the La Porte Community School. She said her entry “demonstrated ways to be active and stay healthy,” she said.

“I thought that’s what a healthy heart meant to me. It just came to mind. I worked really hard on this, so I was really happy when I won.”

Fifth-grader Rhema Zimmer, the winner from Prairie View Elementary in the New Prairie schools, said she chose to create her entry in Japanese anime style because that is how she is accustomed to drawing.

“It looks like darkness is coming at her, but there’s a protection of good things protecting her such as love, friendship, hope and family,” she explained about the girl she drew.

“I thought the heartbeat (symbol with a jagged line next to the girl) would look really nice. It adds contrast to the photo,” she went on.

Zimmer even offered advice to other budding young artists “If you ever make an accident, go with it,” she explained, saying she “had brown marker problems (creating the girl’s hair).”

“Even if it’s not how you wanted it to be in the end, you should go with it because it might end up good anyway.”

Credit said, “We are always looking for new and fun ideas to promote Heart Health during February, American Heart Month. Although we have no pre-set plans for 2020, because of the art contest’s success, it is definitely something we will consider doing again.”