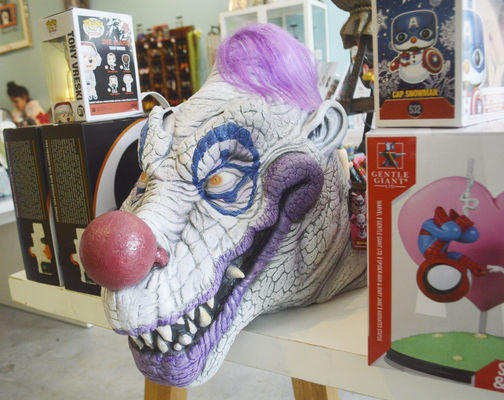 The evil Klownzilla from "Killer Klowns from Outer Space." 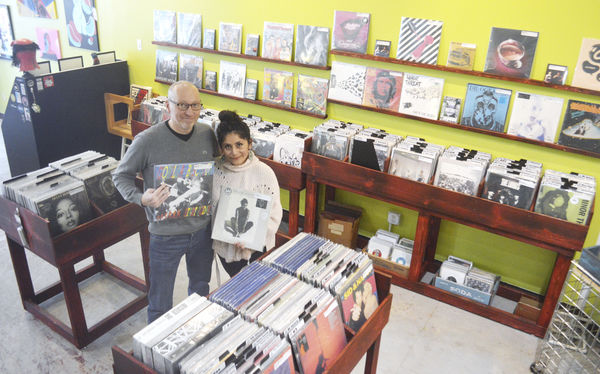 Photos by Matt FritzKC Mars and Mariceli Paz, owners of Static Age in Michigan City, hold up albums for Gorilla Biscuit and Tracy Chapman, a small sample of their record collection at 621 Franklin St. 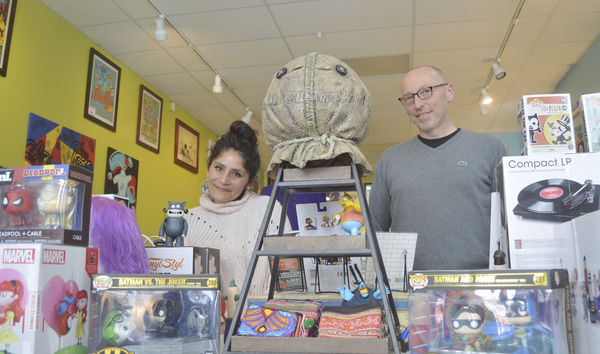 Static Age offers more than just records. Toys, figures, masks and more collectibles are also up for sale at the Michigan City store. 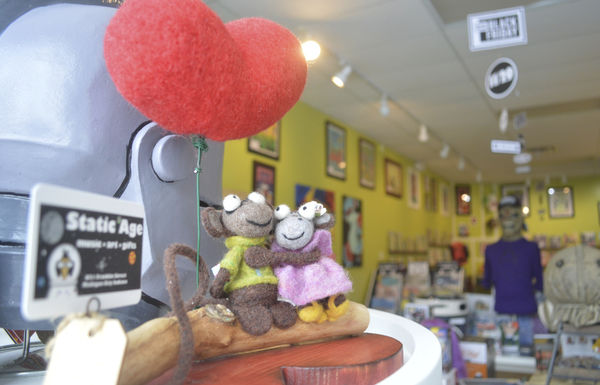 Love is in the air with this needle felt creation by Mariceli Paz at Static Age. 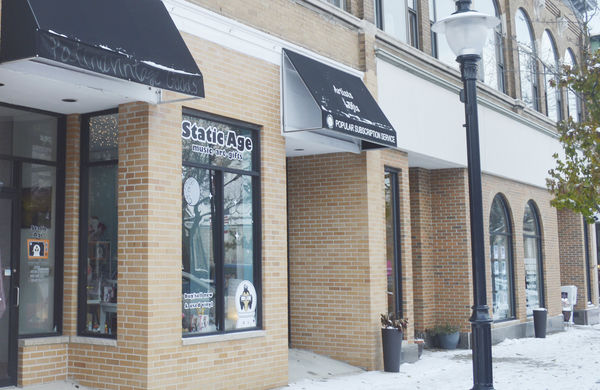 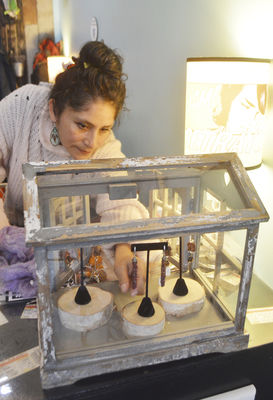 Mariceli Paz shows off some of her jewelry, made from genuine stone and sterling silver, at Static Age in Michigan City. 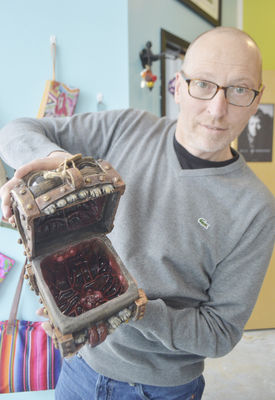 KC Mars holds up one of his Chest Monsters from Gaming Geeks. It's made by Michigan City artists Russ Hapke and Dan Wolters.

The evil Klownzilla from "Killer Klowns from Outer Space."

Photos by Matt FritzKC Mars and Mariceli Paz, owners of Static Age in Michigan City, hold up albums for Gorilla Biscuit and Tracy Chapman, a small sample of their record collection at 621 Franklin St.

Static Age offers more than just records. Toys, figures, masks and more collectibles are also up for sale at the Michigan City store.

Love is in the air with this needle felt creation by Mariceli Paz at Static Age.

Mariceli Paz shows off some of her jewelry, made from genuine stone and sterling silver, at Static Age in Michigan City.

KC Mars holds up one of his Chest Monsters from Gaming Geeks. It's made by Michigan City artists Russ Hapke and Dan Wolters.

He’s known as Klownzilla, the monstrous final boss from the 1980s cult movie, “Killer Klowns from Outer Space,” and he’s not alone.

At least three of his clown buddies are in the store – along with Iron Maiden’s zombie mascot Eddie, and the mogwai Gizmo from “Gremlins” – watching over a collection of vinyl records, handmade jewelry and needle felt work.

On the record shelves – which take up most of the store’s space – are albums from underground labels Wax Trax! and Dischord; recordings from Gorilla Biscuit, The Damned, Throbbing Gristle and Minor Threat, among other hardcore, industrial and hip hop artists; and even some music from Elvis and Johnny Cash, all in the original vinyl format.

According to lifelong Michigan City resident KC Mars, who owns the shop with his wife Mariceli Paz, there’s no rhyme or reason, but somehow it works.

“We are kind of a mishmash of things,” Mars said about the store, which opened April 1 in the Uptown Arts District. “It’s all the things we’re kind of into that we just couldn’t get in town.”

And the name, Static Age, reflects that.

“To us it’s that period we were born into, kind of between the Space Age and the Information Age. To us that’s the Static Age. That’s when records were kind of dying off. That era.”

“While I have pretty broad tastes,” he continued, “it’s primarily from the late ‘70s on – punk, new wave, hip hop, industrial. It’s all the things I listened to, and that I listen to now. There are newer bands in here, it’s not all the stuff I grew up with in high school, but it is more underground stuff, the kind of stuff we like and that we listen to.”

Also populating the store are small, bug-eyed creatures, sculpted from felt and sometimes arranged in little dioramas. Paz, holding up a bouquet of flowers constructed by the same technique, said they're an example of needle felting, a time-consuming process where loose wool is sculpted into characters and objects.

“They just look so whimsical and cute, and people just react to them in such a positive way,” she said, “it just seemed like a neat thing to bring to people, something that makes you smile.”

All the needle felt sculptures and much of the jewelry on display are hand-crafted by Paz, who has been selling her work for years at various fairs, including the Lubeznik Center’s annual Arts Festival. For the jewelry, she uses genuine stone and sterling silver.

“I really try to make things that could be heirlooms so people can pass them down from generation to generation that are pretty unique,” she said.

But the store also includes jewelry from artist Vanessa Mellett of California, and items from creators in Hawaii and Thailand. Michigan City artists Russ Hapke and Dan Wolters, who produce grotesque treasure chests known at Chest Monsters, also have their work on display under the name Gaming Geeks.

Mars said the rubber monster masks come from one of his record distributors.

“What we sell the most of is records,” he continued, “but the masks are a year-round thing for us. We’ve had masks since we’ve opened. We just love the art of them. We think they’re cool. We think of them as affordable art. The action figures too. It’s not your common everyday stuff. But we think it’s affordable art, which we keep in our homes because it brings us joy.”

They work with five record distributors and a couple record labels. One of those is Dischord Records, co-owned and founded by Ian MacKaye of Minor Threat and Fugazi; another is Wax Trax! Records, which was discontinued in 2001 but re-established in 2014.

From the latter, Static Age also acquires T-shirts and a DVD documentary about the Chicago-based label. Mars noted Michigan City is not too far outside Chicago, so a lot of people in the area grew up with Wax Trax! and have memories of shopping at the Chicago store.

Some of the items on display – such as a large Hell Boy statue, monkey masks with Devo helmets, and work by the artist King of Crows – are not for sale. But a lot of the decorations, like a number of Simpsons figures and statues, are for sale (if a customer inquires), even if they are not marked with a price tag.

Mars said customers seem to range in age between 15 and 55, and he’s been surprised at how many have been able to recognize the obscure pop culture references in the store.

“It constantly surprises me how often people walk in and know who the Killer Klowns are,” he said. “But everyone who comes in, they recognize that movie. It’s a cult movie that if I ask my friends if they’ve seen it, nobody knows what that movie is.”

Mars, who has a background in craft beer, said he used to travel extensively, up to 150 days a year, and instead of hanging out in hotel bars, he and Paz would go to record stores. Every town had a record store, so they kept amassing a bigger collection. He never got rid of his records or record players from high school, so he already had a formidable number. When they discussed starting a store, they naturally started with his albums.

The couple met in 1997 while going to college in Montana. They married in 2002 in Cusco, Peru, where Paz’ family is from, then moved to Mars’ hometown. He's a 1988 graduate of Rogers High School.

And he’s been impressed by the community’s response to the business.

“It’s exceeded our expectations up to this point,” he said. “but we know it’s a niche business so our expectations were reasonable. We would like to continue to grow, and we hope we can eventually have a space that includes more music and have more people perform live music”

He said they’ve had six or seven live shows at the store, but would like to have more.

“I think that’s one thing that’s missing,” he said. “We have a lot of bands in Michigan City, but I don’t think they have a lot of outlets to play original music, so we’d like to be part of that.”

And with his background in craft beer, the new space could have a beer bar, but that’s in the future.

Static Age is located at 631 Franklin St. Hours are noon to 4 p.m. Sunday and Monday, noon to 6 p.m. Tuesday through Thursday, and noon to 8 p.m. Friday and Saturday. For more information, contact the store at 219-214-1598 or info@staticagemc.com. They can also be found on Instagram at StaticAgeMC and on Facebook @StaticAgeMC.