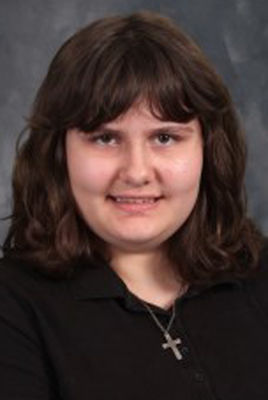 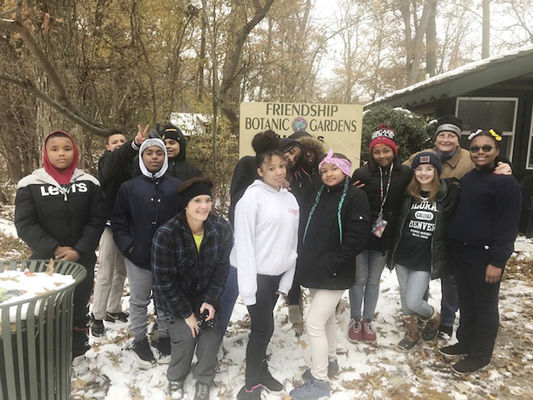 A team of Krueger students and science teacher Leslie Samelson pose for a group photo with Rima Binder, back row, right, Master Gardener and board member at Friendship Botanic Gardens. 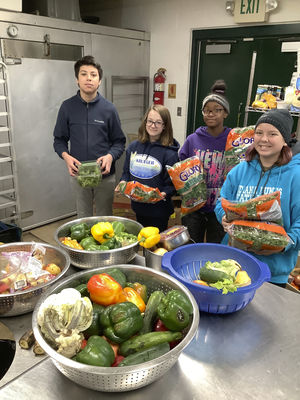 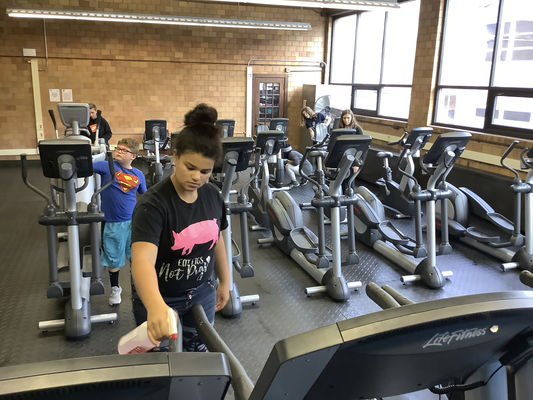 Naomi Williams, front, and Christian Shanks, behind, were among the students who volunteered at the Elston YMCA, cleaning fitness rooms and equipment.

A team of Krueger students and science teacher Leslie Samelson pose for a group photo with Rima Binder, back row, right, Master Gardener and board member at Friendship Botanic Gardens.

Naomi Williams, front, and Christian Shanks, behind, were among the students who volunteered at the Elston YMCA, cleaning fitness rooms and equipment.

On Nov. 15, 77 students from Krueger Middle School traveled to various locations around Michigan City to give a helping hand to the staff members of Friendship Botanic Gardens, the Elston YMCA, Fried's Cat Shelter, the Macedonian Missionary Baptist Food Pantry, and the Washington Park Zoo. Last year there were 60 students and four locations to help on “Krueger Reaches Out” day. We were lucky this school year to help out an additional location, which allowed more students to participate in this great opportunity.

A group of excited students helped out at the zoo with preparing the critters for the next freeze. Duties included sifting sand for the reptile house, cleaning and assisting the animal staff in creating food in the kitchen, and creating cards for stockings that would go to deployed soldiers from this area who are overseas and can't come home for Christmas. According to Zoo Director Jamie Huss, “The zoo likes to partner in community service not only for the help, but to get people involved from the community.”

The cat shelter helpers couldn't contain their excitement as they helped clean and prepare the cat shelter for its adoption day event. They also helped give cats and kittens medicine and some playtime. After asking a few of the helpers, they all agreed they would go again any day.

Student Aubrey Temple-Lebuis spoke with a smile, “I’ve learned how many cats were dropped off by people, along with how much work taking care of so many cats really is.”

This shelter is a no-kill shelter with more than 550 cats.

Students at the YMCA helped clean and mop their fitness area, along with the bleachers of the Wolf Pack (Red Devil) Gym. Although they cleaned, they did so with a friend and a smile. “I learned that it is a good deed to volunteer to help others,” said student Siniyah Burdine.

In the end, they had lunch with free time in the gym with their friends who helped at the food pantry and the gardens.

Students at the food pantry were part of no small feat; they assisted in the organization of cabinets, stacking an array of cans, and sorting various foods. Student Miniyah Cochrin chimed in, her favorite part was “helping out the community.”

The botanic garden group helped plant 400 daffodil bulbs in front of a cabin and front walls, according to biology teacher Mrs. Samelson. Some students learned new facts about the gardens.

Each location benefited from some real helpers who, in the end, helped in preparation for this winter season and hopefully many more to come. Let us hope that this tradition of community service by Krueger continues. The work will always be done with positivity, teamwork, and a bright smile as students perform small tasks that make a huge difference for the public.

Eva Huss is a Krueger Middle School student. In the Middle is a regular column produced by MCAS middle school students.